Schwartz: For Frost, winning is a family matter

Brad Frost has accomplished more in 8 years at his job than most of us will in our entire lifetime. He’s been named WCHA and national coach of the year multiple times. He’s had perfect seasons and won three National Championships.

There are coaches that work for decades just to get to a Frozen Four and Frost has been there so many times I’m convinced they just reserve a room for him at the hotel when the site it’s announced … or at least they should.

It led me to wonder how someone can have continued success year after year. Yes he gets the best players the state has and yes Minnesota has the most talented pool of players in the nation and yes when you shake hands with someone who happens to be wearing three national championship rings, it’s an easy choice.

But if you know Brad Frost, you know he’s not the kind of guy to flaunt rings, or his very impressive resume. He seeks out players who want to play his style, which is to say that players aren’t individuals in his system; they are cogs in the machine, no one is more important than the next player.

If you think it’s a cliché consider Amanda Kessel, one of the best forwards in the game, who helped the Gophers win a title in 2013 and was an Olympian in 2014. They played without her this year and still won simply because Frost preaches that not only is a fence only is good as its weakest link, it needs every link to stay standing.

Last Thursday night at the Frozen Four banquet I asked Brad how he continues to win, year after year with new players and tougher competition. His answer and rankings of priorities surprised me. 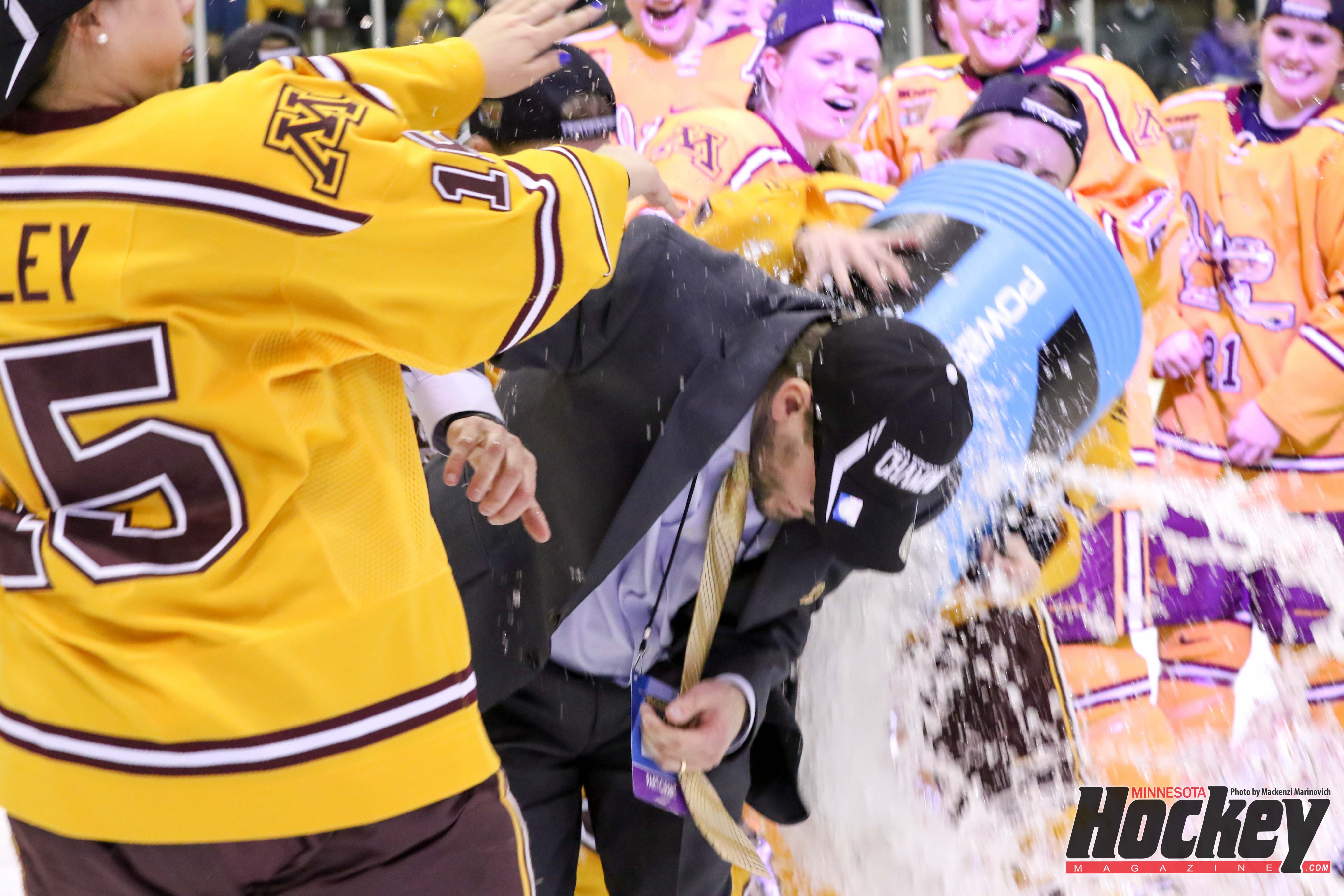 “First and foremost we recruit great kids. They come from great families,” Frost told me.  “And they have to be good hockey players. And when you put a group of 22 or 23 players together like that, you know you’re going to have success.”

What Frost believes, in essence, is that you can teach hockey but you can’t teach attitude, the ability to accept coaching or teamwork. In this day and age of anything-goes college athletics, his approach is not only to be commended, it should probably be copied!

I have had the good fortune of getting to know Brad over the past eight years. I came to Minnesota around the same time that he took over the Gopher Women’s hockey program full time. I’ve met his wife, his kids and even his brothers (because when a Frost is playing for a national championship – EVERYONE comes to town). So I believe I’ve gotten a good read on him over the years. And the funny thing is, hockey is not even the top priority on his list.

It’s his family and his faith.

After Thursday’s Frozen Four banquet, the program was over and the players were getting ready to leave for their hotels. We were roughly 24 hours away from the Gopher’s national semifinal—the biggest game of the season for Frost and his team.

However, Brad was not sweating the details or running back to the office to go over more film, he was busy being a father. His oldest son had a few tests the next day and he was nervous (as we all would have been). But rather than pass the phone to his wife and leave her with the parental duties, I witnessed Frost doing some of his best coaching yet.

He very calmly motivated his son and convinced him that he could conquer this task in front of him, no matter how tough it seemed. At that moment it was easy to see how he gets his players to lay it all on the line for him.

Frost considers them part of his family, which is why he gets the best out of them. They respect him as a coach and they respect each other as a team. It’s a formula that has proven tough to beat.

It’s funny sometimes how sports can be subject to over thinking. Which match-ups are best, what offense and defense will exploit your opponent? Don’t get me wrong, Frost is the “Doogie Howser” of coaching for sure. His success at such a young age is undeniable but what makes him so successful is the simplicity with which he coaches. He sees the value in an entire team, not just a few stars.

Which is why no matter the cast of characters in his story, the ending is almost always the same: Frost and his team holding a championship trophy.