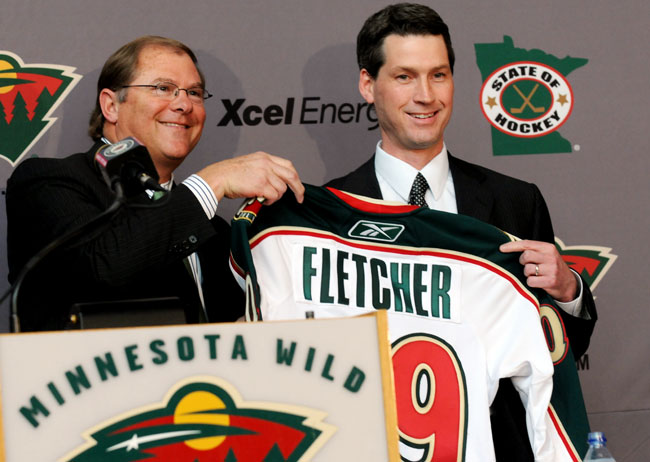 For my day job last week at KARE 11, I had the opportunity to sit down with Wild owner Craig Leipold. For those of you that are unaware, Leipold does not often grant those types of meetings so I was grateful to have the time with him.

Craig Leipold was not a hockey guy when he began his career in sports ownership. His first foray into the field was as the owner of the Nashville Predators in 1997, when he bought the expansion franchise for (a measly by pro sports standards) $80-million dollars. It took a few years for him to realize an obvious truth: selling hockey to southerners is about as easy as selling ketchup to a woman in white gloves. But once he did realize it, Leipold sold and moved back north to the State of Hockey.

Leipold has run the team the way every fan would like to run a team, like you would run it if it was fantasy hockey team or a video game: Identify a need and fill it. He’s quick to tell me that he “spends responsibly” but that he’s not afraid to do so.

When the team needed leadership they went out and got Zach Parise and Ryan Suter. When they needed more offense they acquired Jason Pominville. After last season they needed more goal scoring, so in came Thomas Vanek at (what would seem to be) an affordable price.

Leipold spends like all he cares about is winning and that’s not too far from the truth. He admits that he’s not the greatest guy to be around after a loss because, as happy as he is after a win, he falls even harder when it doesn’t go his way as, more than anything, Craig Leipold loves this team.

He is not just a financial backer, he cares about the guys. So much so that when defenseman Ryan Suter’s father, Bob, passed away just days before training camp opened he chartered a plane to fly the entire team to the funeral. For Suter that gesture meant the world and for his teammates it showed a commitment that’s rare in sports.

Owners often grow into dynamic personalities (see Mark Cuban, Jerry Jones, Ted Leonsis or others) and Leipold is that. When he’s in the room you know it. He owns it. But he is smart enough to know his limitations.

He insists he does not try to coach or manage from the owner’s suite. Chuck Fletcher and Mike Yeo have Leipold’s confidence and he relies on them to take care of it. Besides he spends most of his time these days on bigger issues, like trying to get the Winter Classic to Minnesota.

Leipold assures me that not “a month goes by” that he doesn’t call NHL commissioner Gary Bettman and lobby for the game to come here. For years Minnesota has been close, but each year they lose out. Things seem to be going in the right direction, though, and Leipold told me that Minnesota is near the top of “a very short list” of candidates to be a part of the 2016 Winter Classic but that there are other factors that could come into play as to when and where they will play. Without knowing what those are, I am inclined to believe that there is a good chance it’s coming to Minnesota soon.

The man knows hockey and he knows business. He also believes that this franchise is going in the right direction and that they are poised to win big soon. Naturally he wants to believe that since the team’s success has a direct impact on his bank account.

However, selling hockey in Minnesota might be one of the easiest jobs around. We love it on all levels. Still Leipold sees a great challenge in having to remain relevant. There are so many options here for good hockey that people won’t flock to see a loser even if they are losing on the highest level of play. So therefore, in order to keep people coming to the X, the Wild need to win.

There is an art to knowing the best way to build your business. Its part effort and part luck and in the NHL it’s not different. Knowing what moves to make and when are an integral part of success and surrounding yourself with the right people to help is a must. Craig Leipold seems to be leaving nothing up to chance in Minnesota and it’s the Wild and the fans that are benefitting.