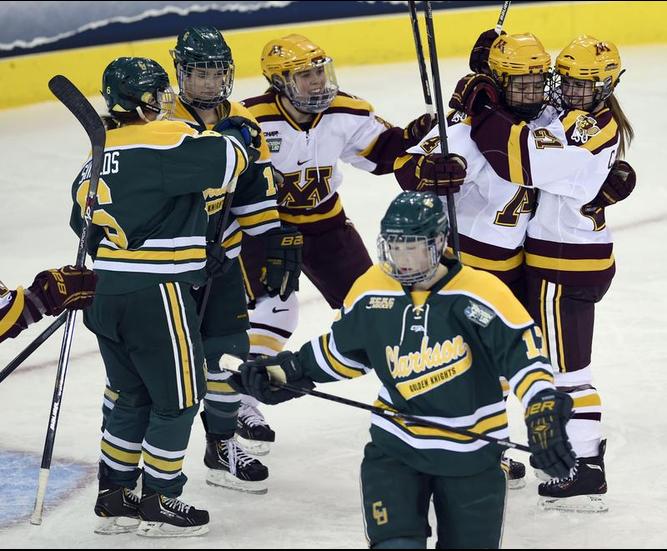 As we get ready for the Frozen Four for Men’s hockey, there is something that I just can’t get out of my craw.

Throughout the Men’s Division I postseason, all of the games have been televised on different channels and their various platforms, yet nowhere on any network at any time was a single game of the Women’s NCAA hockey playoffs broadcast.

As a member of the media, I am both appalled and, frankly, embarrassed. But not for just for the obvious reasons.

My anger is not based simply on the disrespect towards the females in the sport of hockey. It’s towards the ignorance of the sports networks and the NCAA.

To think that this championship game would not have drawn a big enough audience to make it worth it financially is simply ignoring the audience. The very same situation happened last year when the Gophers completed an amazing perfect season and won a title. Ridder Arena was sold out, their story was national news and still none of it was televised.

So I guess there should have been no surprise to see that it wasn’t on television this year. However there was and, like many others, I was just plain shocked.

I have been to a number of Gopher women’s hockey games and I have seen capacity crowds where there was only standing room. I have seen lines to get into games during last year’s post season which leads me to believe that there were others that wanted to see that games who could not.

Trust me I get it, television coverage is not about charity, it’s about making money. I know that programming is driven by ratings. However, you cannot tell me that the NCAA finals between Clarkson and Minnesota wouldn’t have provided an audience—maybe even more so than, say, PBA bowling or an early-season lacrosse game—especially in a year in which the Olympics did so well in the ratings (on NBC of course … sorry for the shameless plug).

Yet those sports get national exposure and the women’s hockey title game does not.

Please don’t get me wrong, those sports deserve their time in the spotlight as well. I am simply implying that if there is enough of an audience for those sports to warrant a national (or even regional) broadcast, then the women’s title game should have as much, if not more, interest.

There is another side to this.

Female athletes work just as hard as men and they deserve the TV time so their friends, their families and their other supporters can see them and so that their schools can benefit from a recruiting bump that national exposure can bring. If you don’t believe that can happen go ask any school that is willing to play their football games on a Tuesday just so ESPN will televise it.

I understand that in our country men’s sports draw higher ratings than women’s. This is not a judgment statement and it is not meant to incite your rage. It’s is a fact, a sad fact, but nonetheless a fact.

This was an exception, however. As I have stated in previous columns, the Gopher women’s hockey team has captivated us all this season. Whether it was their amazing win streak, their exceptional run through the WCHA or their run at a third consecutive national title, they were a special group and one that caught a lot of people’s attention and I believe that people would have watched.

Now, in full disclosure, I don’t know the reason that these games never make it on any television network. I have heard a lot of reasons, most of which surround the NCAA (and Turner broadcasting) asking for too much money from networks to purchase the rights (via the Minneapolis Star tribune in March of 2013).

If that is indeed true, then shame on them all. The last two years were a golden opportunity to make strides for women’s sports in our country and, for once, meet the demands of the viewers. Not making it happen somehow was a huge mistake and one I believe will come back to haunt them later.

Women’s sports are only getting better and the demand for viewing them is getting greater. It’s only a matter of time before even more people demand to see them on something other than a grainy internet stream.

But if the networks and the NCAA don’t step up and meet that demand, they’ll lose the audience, maybe not enough to cause something drastic, but in television every viewer counts, especially the ones that stop watching.

The women’s hockey championship is back in Minnesota again next year and, once again, it’s sure to draw an audience both live and on TV. So the proverbial puck is in your end NCAA. Will you find a way to get it televised?

Like the game itself, your decision is one everyone will be watching.