Schwartz: Kuemper is on the right track 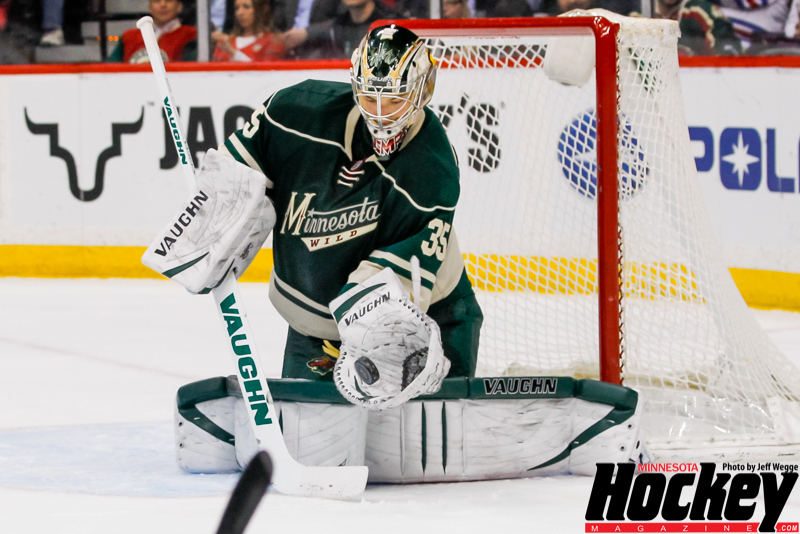 Darcy Kuemper is poised to give the Minnesota Wild something they haven’t had since Niklas Backstrom last made a play for the Vezina in 2008-2009 – a franchise goalie.

Last season with the team dealing with injuries to Backstrom and Josh Harding, Kuemper was called up from Iowa in January. While he had mixed results as part of the growing process he was a big part of helping the team get back into the playoff picture winning 5 of 8 games from the beginning of February to mid-March.

He suffered an injury late in the season, which caused his numbers to dip before a small playoff rebound. Kuemper finished the year 12-8-4 and as one of five goalies the team used at one point in the year.

But as the saying goes, if you have five goalies, you don’t really have any (or maybe I just made that one up). Either way the Wild had a problem. Darcy Kuemper showed flashes but not quite enough to prove he was the long-term answer.

Kuemper — obviously believing otherwise — nearly held out of training camp to get the one-way contract with Minnesota he wanted, essentially securing him a roster spot and a chance to fight for a starting job. That’s a lot of confidence for a guy who really only had one extended call up in his short career.

But goalies are, if nothing else, incredibly brave (or crazy for standing in front of a speeding puck every night). Kuemper (and his reps) rolled the dice and the gamble paid off when the Wild suddenly had an opening after an injury to Josh Harding.

It was serendipity; the Wild had the man they hadn’t planned on having just yet.

This year Kuemper has picked up where he left off. He became the first NHL goalie in decades to start the year with three shutout wins in his first four games. Granted, he might not have faced a huge amount of shots but he stopped the big shots when needed.

Mike Yeo said he “plays big” and at 6-foot-5, while it’s not hard to, it’s true. Kuemper always seems to have himself in the right spot and playing the right angle. Yes, he’ll have his off nights, but the kid’s combination of skill and confidence is a winning one for the Minnesota Wild.

The other thing that stands out to me this year, in particular, is Kuemper’s ability to forget – both good and bad games. This is a huge sign of maturity. After his win over Arizona (his third shutout) he was asked if he could have imagined a better start. He laughed it off, said no and instantly when onto the next question.

If you’re a head coach that is what you want in your goalie, the ability to never hang onto good or bad games. Don’t get a big head during success and don’t hang it too low when things are bad.

Of all the players on the ice the goalie has to be the one that is not fazed by emotion. The ice in his veins should be colder than the ice he skates on. He’s the “closer” if you will and he always has to remain constant.

Kuemper has shown he can bounce back from the bad losses too. So far he has yet to lose two games in a row. In fact it’s been the opposite. After each loss so far this season, Kuemper has gone on to win the next two and not given up more than three goals in either contest.

Only time will tell if Kuemper can keep up his hot streak. But in fairness, it doesn’t take nearly as long to realize that a big part of his success will be because of the defense that is in front of him.

Kuemper will always have to be the guy that makes the saves, but when you’ve never faced more than 30 shots in your first 9 games that makes the job a little easier. Kuemper’s defense has been good this year and, with guys like Ryan Suter and Jonas Brodin locked in for a number of years, Kuemper could conceivably have a good core in front of him for some time.

There is still a lot to happen in Kuemper’s career before we can judge him as the savior… or a sieve. But from what we’ve seen so far he is certainly on the right track.

Think about this for a moment: In the 2006-2007 season, Devils goalie Martin Brodeur set a personal best mark of 12 shutouts in a season. Like Kuemper he posted a 0 goals against in his first game, but it wasn’t until the 10th game that he got number 3. Kuemper did it in his first 4 games.

In the 1997-1998 season Sabres goalie Dominic Hasek set a personal best 13 shutouts in a year (also putting him seventh all-time on that list). Hasek didn’t record his first shutout until his 16th game and didn’t get his third until his 23rd.

Now, I am certainly not naïve and silly enough to imply that Kuemper deserves to be mentioned in the same breath as those two. Brodeur and Hasek are by far, two of the best all-time at the position. But what I will argue is Kuemper is at least closer to starting down that path than anything the Minnesota Wild have had in the last 5 seasons. And at the ripe old age of 24 he is still years away from hitting his prime.

The sample size is still small, but from what we’ve seen it’s certainly a good one. Kuemper may still have a way to go before he can be deemed a franchise goalie but, based on what he’s done so far, the debate is as wide open as the goal he has so successfully protected.