Fighting’s glorification at highest levels inspires others to follow suit 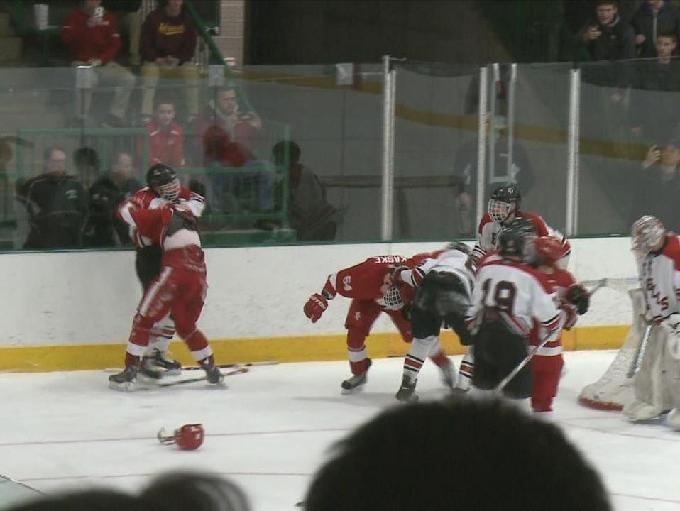 Fighting’s glorification at highest levels inspires others to follow suit

There is really no room for this in high school sports.

That is two times too many.

Please let me first say that I have been there. I played high school hockey and I have been a part of emotional games. At 16 or 17 years old your emotions run high, you’re driven by a concoction of testosterone, peer pressure (to be tough) and competitiveness and when a tough game that is physical ends, it’s hard not to go over a punch a guy in the face. I’ve seen it many times and frankly I’ve done it. It doesn’t make it right, but it does make me understand where kids are coming from.

But guys (and girls) have to keep cooler heads. It’s part of growing up and it’s part of being on a team. When you don’t do those things then kids get hurt and teams suffer when they have to lose good players. Trust me, the players knew what was at stake. Every high school player knows that if you drop the gloves at the end of a game you’re going to miss the next one, no matter what point in the season it is.

Let me make something clear; I don’t solely blame the coaches. Nor do I solely blame the blame the kids involved. I blame a combination of both and the culture of hockey. I’m sure the coach’s told the kids not to do anything stupid at the end of the game. I’m also certain that they made it clear what the consequences would be if they did. But sometimes you lose your head. It’s not right, but it happens. What bothers me more is that they know this to be an acceptable practice. And why do they know this you may ask? Because not only is it accepted at higher levels of hockey, it’s encouraged.

In juniors and pro’s fighting is more than just ok; it’s celebrated. You constantly see hockey fights on the television highlights, less than in years past – but it’s still there. There are still players in the NHL who make their living fighting others and being “an enforcer.” Again, not as many as before but it’s still happening. Kids who play hockey see this as they grow up watching hockey. It is learned behavior.

Do you know why you never see a kid take off his skate and try to slash another player’s throat during a game? Because they don’t see it happening anywhere else! Ok, this may be an extreme example but my point is that if kids didn’t see it happening and see it glorified, it would not be an option they think of when in the heat of battle.

With all of this being said, I wish that I could tell you that I have an easy answer for this sad state of affairs. I don’t. But I will say this; change has to start at the top. Fighting will never be outlawed in the NHL I know this. It can, however, be outlawed from junior hockey and with so many of these kids playing junior after high school or even during high school they are learning that it’s ok in one league and not another. For 16-21 year old kids, that can be a tough distinction to make in the heat of conflict.

High school leagues, not just in Minnesota, can have harsher penalties. Instead of getting a game for fighting, make it an automatic ten, or even a season. I guarantee kids would think before throwing a punch. Yes, I know that kids whose careers are ending in those games (like in both of the conflicts last week) will do whatever they want because they won’t fear consequences. That’s true, but just like it takes two to tango, it takes two to fight and in the altercations last week it was more than just one side throwing punches. There is always a choice to punch back or walk away and live to play another day – the wrong choice was made last week and teams are now paying the price.

In our current age of concussions and the worry about their lingering effects this issue is a must change. But change must be swift and serious if we want this type of behavior to cease.

Kids should not be fighting in hockey or anywhere, but the adults have to stop first.