Schwartz: NHL Too Easy on Maestros of Mayhem 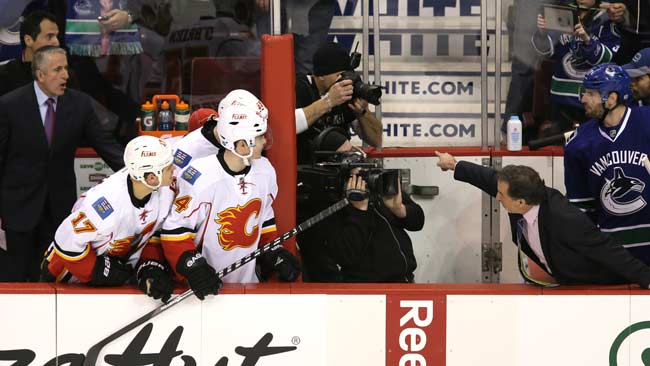 I vaguely remember ranting about a topic similar to the one I am about to embark on, but this was something that I just could not ignore.

Last Saturday the Calgary Flames and the Vancouver Canucks orchestrated hockey version of a bar-room brawl.

8-misconducts were given out and a total of more than 200 penalty minutes were assessed. But this was not a ‘heat-of-the-moment, talk-about-your-mother impromptu throw-down. This was orchestrated. The fourth lines from each team started the game, which in hockey consists of guys whose strength is—well not hockey (think Happy Gilmore with a bit more talent). After the opening whistle punches were thrown, although if you watch the video it seemed that not everyone was up for this, and guys beat each other’s brains in. Fans cheered, guys got tossed and I’m fairly certain NHL Senior Vice President of Player Safety Brendan Shanahan’s phone rang off the hook … it was only 2 seconds into the game.

This was not only a train wreck and a huge black eye for hockey (see my earlier column on senseless violence in the NHL) but it was far from over. 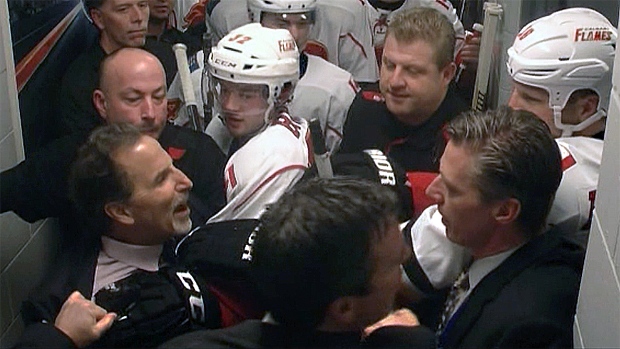 In between periods Vancouver head coach John Tortorella tried to go into Calgary’s locker room to get into a fight of his own and keep this going. Think about this: A COACH TRIED TO GO FIGHT A WHOLE TEAM! My only regret is that one of the Flames didn’t take a shot at Torts and bust his nose.

There are so many things wrong with this series of events, so I’ll start at the top: This was orchestrated, not by a player, but the player’s coaches! The same guys who are supposed to win games, but also keep the best interest of his players at heart. In the NHL road teams submit their roster’s first which means Flames coach Bob Hartley felt like he wanted to send his guys out there to get punched in the face—all in the name of a game that hadn’t even started yet. Yes, Vancouver is a huge rival but I think it’s a little irresponsible for a coach, who by the way doesn’t have to worry about concussions, to send a group of his guys out to risk getting one. And if you scoff at the idea that fights can cause that—concussions are only the beginning. In 2009 a junior hockey player died after his head hit the ice during a fight.

Did Tortorella or Hartley consider this when they sent their players out? I certainly hope not, because in a sick way that would make this even worse. It’s a cowardly move. This is a hockey game, not war gentleman. You’re not Napoleon.

Tortorella is also a repeat offender. It seems General Tort’s did the same thing in March 2012 as coach of the Rangers, calling out Devils coach Peter DeBoer before a line brawl.

You might be thinking, “Hey Dave, these guys are grown men, they can speak up and say no”. Sure they could. And with it they’d get a one way ticket to Abbotsford, BC or Utica, NY, while being placed on the ‘not a team player’ black list. Imagine if your boss asked you to do something that you didn’t want to do and you declined. They have a term for that, it’s called insubordination and many professions see it as a fire-able offense.

For Tortorella’s latest antics he got … a 15-DAY suspension without pay while Hartley got a $25,000 fine. That’s it. Keep in mind that in our legal system this would have been the second time Tortorella had organized an assault and would face jail time. The fact that he lost just six games for this second offense is deplorable. And it undermines everything the NHL should stand for. This is not the 1980’s or 1990’s. We know now the correlation between hits to the head and brain damage and because of that there should be fewer fights, while organized brawls should have no part in the game. It brings nothing to the game, but has the potential to do so much harm. This was a teachable moment for Brendan Shanahan. The right thing to do was make an example of Tortorella and Hartley so that not only would they never do it again, but so that any other coach thinking about doing this in the future, would not.

There was a time that an old joke would perfectly encapsulate this incident: “So I went to a boxing match last night and hockey game broke out”. But there is nothing funny about what happened in Vancouver. The only punch line here were the ones that players involved were forced to throw and the only joke was the so-called discipline that came from it.