Wild’s mix of veterans and rising stars have them poised for future Cup runs. 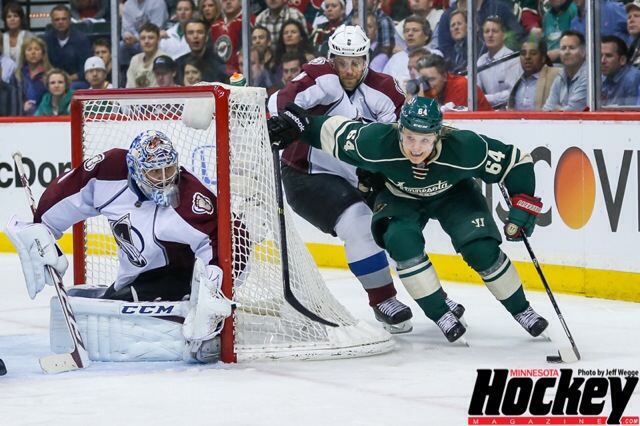 Mikael Granlund is just one of a handful of young players making the future bright for Minnesota. (MHM Photo / Jeff Wegge)

Wild’s mix of veterans and rising stars have them poised for future Cup runs.

They gave us a magical run through the playoffs, which ended all too quickly. The Minnesota Wild fought back from being down 0-2 not once, but twice this post season before Chicago ended their run on a goal that can only be described as fluky.

Still, that shouldn’t take away from what this team has done this year. I know what I am asking you to do is difficult but it’s necessary.

Before you proclaim that this is some sort of predetermined ending for Minnesota sports fans who rarely get a chance to actually witness a title, before you crawl back into that dark sorrow filled place where you assume this was the Wild’s one and only chance at a title because they won’t make a playoff run for another decade, just listen to the rest of what I have to say.

This is a team that is built for something bigger.

Am I purveying positivity and hope with regard to Minnesota sports?! Yes I am.

It starts at the top with head coach Mike Yeo. Who is absolutely – in my opinion – due for a new contract and a sizeable raise. This is a guy who at one point in the season was one loss away from losing his job. He handled immense pressure from having to coach costly talent to having to produce for an owner and a fan base that had a LOT invested (both figuratively and literally).

Chuck Fletcher told me before game two in Chicago that the front office has given Yeo a vote of confidence. Now it’s time to give him a little more. Teams don’t come back from being down 0-2 twice in one post season if they don’t have profound respect for the head coach. Clearly this locker room has great admiration for Mike Yeo—as well they should. He’s a great coach and he proved it this year.

Zach Parise and Ryan Suter are the faces of this franchise and they proved their worth. Parise had 14 points in 13 post season games, including a four point night in game six of the Colorado series which inevitably sent them back to Colorado for game seven and a series win (Fun Fact: He was a 100% shooter in that game. Two shots and two goals.) Suter had seven point in 13 games, but averaged more than 29 minutes per night. He also seemed to play through some pain, although he’d never tip his hand as to anything specific or how much it was bothering him.

But it wasn’t just the big guys doing all the work. Matt Cooke was a work horse and a catalyst in both series. Dany Heatley played some of the best hockey I have seen out of him in a Wild uniform and did so after being benched late in the season.

Along with them is a talented group of young players. To name just a few: Mikael Granlund scored the overtime winner in game three versus Colorado, Nino Niederreiter did the same thing to Colorado in game seven. Erik Haula has proved to be, without a doubt, the team’s best seventh-round pick and if he continues his great play from the post season has the potential to be one of the best seventh rounder’s of all time. However I don’t want to pronounce him a Hall-of-Famer just yet … let’s just say he’s exceeded most people expectations—maybe even his own.

Does all of this guarantee that they’ll instantly be Cup contenders next year? Absolutely not. Does this mean fans should know that their team is heading in the right direction? Yes, very much so. To continue down that road I think we all know they need stable goaltending, but that is a topic for another article.

If you look at teams that have won the Stanley Cup most recently, like Chicago and Los Angeles, they have depth. They have a few “big time” scorers and a larger group of talented up and comers. Chicago is (unfortunately for the Wild) a great example of this. While their top four in playoff scoring is also four of their top five highest paid players, Brandon Saad who is tied for sixth with nine points has a base salary of $894,164 (according to CapGeek.com). Defenseman Johnny Oduya has 4 points and is plus-4 this post season makes roughly $3.3 million.

Now look at Minnesota’s breakdown. The team’s top two scorers were Zach Parise ($7.5 Million) and Jason Pominville ($5.6 million). But scorers four, five and six (Erik Haula, Mikael Granlund and Charlie Coyle) make $4.82 million collectively. These are guys that could potentially turn into the type and caliber player of Parise and Pominville but in the meantime they allow the Wild to continue at a high level and sign other talent to join and elevate them.

The way the season ended was a shame, but the excitement it gave the fan base and the Twin Cities was memorable and I believe it’s the beginning of a successful few years of professional hockey here in Minnesota rather than just a one-hit wonder. And hey, if I am wrong that dark place of despair isn’t going anywhere with the way some of our other local sports teams perform (I won’t name names) so there will always be a place to meet and commiserate.