Schwartz: Parrish’s Husky heart is still in the game

When former Wild forward and St. Cloud State Husky Mark Parrish retired from professional hockey in 2012 after a season in the AHL, like so many other athletes, the transition to civilian life was a tough one.

“That last year in the American League and the first winter here, it was hard to watch the NHL,” Parrish recalls. “With friends of mine still playing, you still get that ‘Oh I could do that better than that guy’ kind of thing,” Parrish chuckles. “Obviously it’s not true, because if you could then you’d be out there.”

Two years later, Parrish laughs about that time, partly because that’s just his good natured personality, and partly because of his new passion of doing color commentary for his alma mater.

“The best thing I realized is how therapeutic it was for me as well,” Parrish says.

“I feel so much more part of the game now than when I did leave. And it was a godsend. Anyone that walks away from it you’re gonna miss it.”

That view is Mark Parrish in a nutshell. Part comedian, part philosopher and all hockey player. His 14-year career took him literally coast to coast and almost everywhere in between. He’s close friends with NHL royalty and has a story about each and every one, including once being traded to the Florida Panthers for team leader Tommy Fitzgerald. This very much annoyed their franchise goalie, John Vanbiesbrouck, who felt like the team was giving up on the current season by shipping off Fitzgerald.

“Beezer just tore into the team about me,” recalls Parrish with a giggle. “I mean, it wasn’t personal because he didn’t know anything about me. They thought they had a chance at the playoffs and the traded off their heart and soul and went the other way, all for some young punk and a third round pick.

“Thankfully when I did finally get there Beezer had been traded to Philadelphia.” 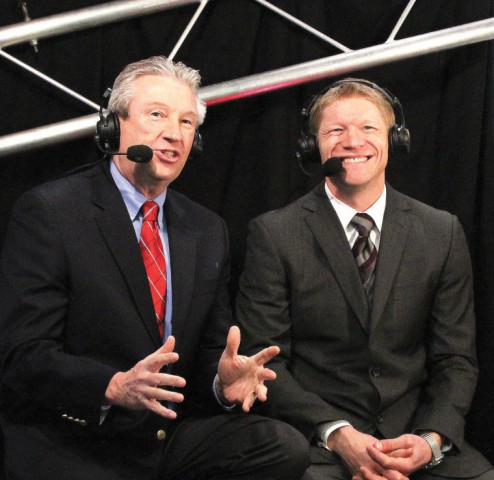 Just over 15 years later, Parrish now finds himself earning his keep once again. Only this time its back where his career really took off at St. Cloud State and no one is upset by his presence. Parrish has been working for the school’s TV station for the last two season doing analysis alongside Jim Rich. But even though he’s comfortable in the surroundings, he admits it’s taken some time for him to become totally confident in his own ability.

“My first broadcast, I think I used the word ‘great’ forty times to many,” Parrish laughs. “And ‘unfortunate’. I’m still not allowed to use that word again, let’s just say that.

“I remember getting away from that first game and I was a wreck.”

Two seasons later he is getting much more comfortable. He is enjoying getting to know the school’s new players as well as head coach Bob Motzko (Parrish played two season for Craig Dahl).

“He is probably the best in college hockey that I have dealt with.”

Now he is starting to look to the future. At 37 he has plenty of work life left and this foray into broadcasting has really changed his post-hockey expectations.

“After doing it for a couple of years I have enjoyed it much more than I thought I was going to. And I’ve gotten to the point now where I wouldn’t mind seeing where this takes me.”

“It’s kind of like my new Christmas toy,” Parrish laughs, “I’m playing with it to see how far it goes and what I can do with it.

Still, as exciting as the new toy is, he believes something shinier will catch his eye someday; a spot behind the bench.

“I miss being in the thick of it and being in the middle of it all,” he says. “And I miss telling someone off, then grabbing a beer with the same buddies.”

Parrish may eventually have a way with words with his players but, at least for now, it’ll wait as his words are better suited describing the action, than being a part of it.