Schwartz: Wild Should Pass on Vanek

At this stage of his career, the free-agent former Gopher is not worth the risk. 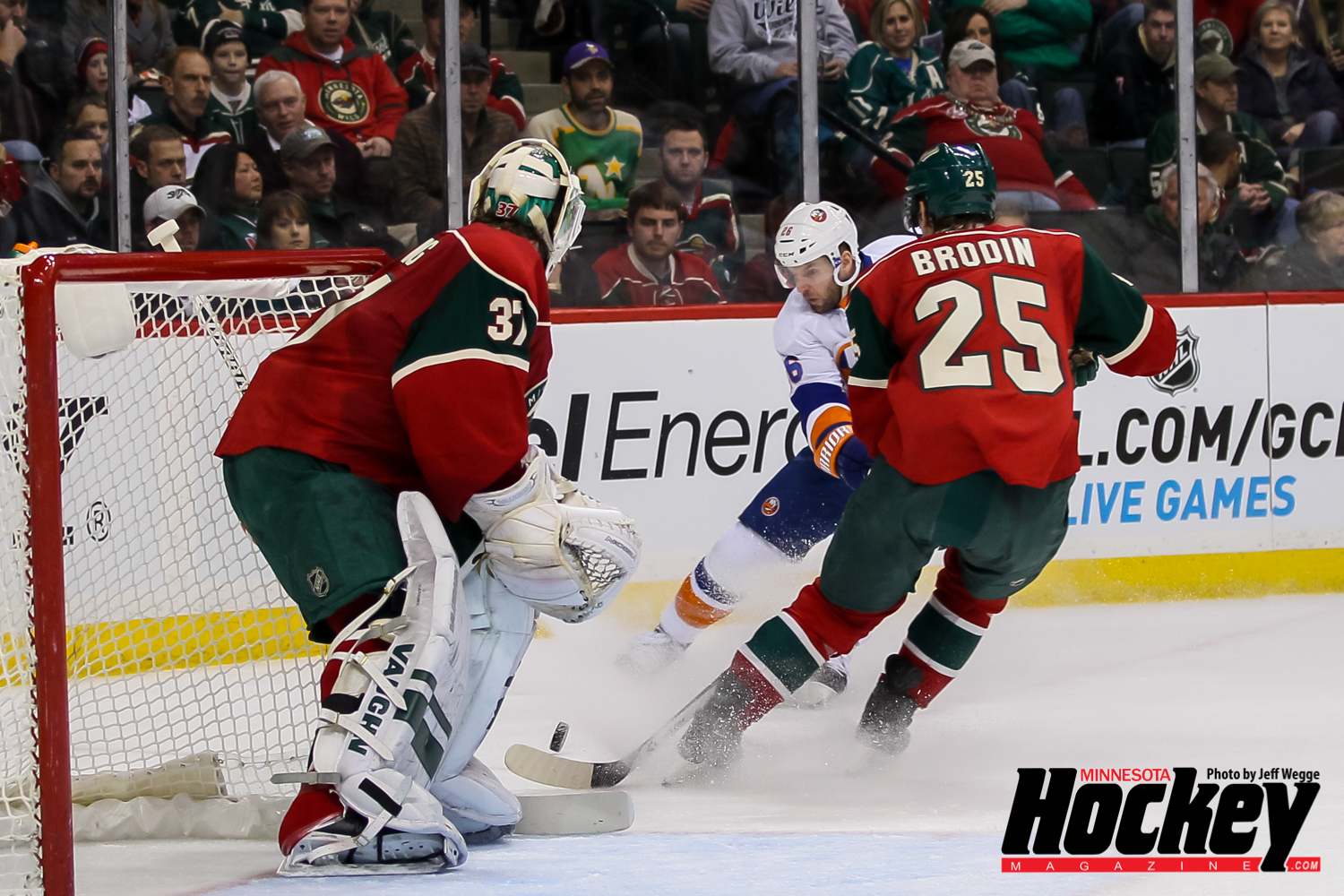 Thomas Vanek takes the puck to the net as Minnesota’s Jonas Brodin defends in front of goaltender Josh Harding in the Wild’s 5-4 loss to the NY Islanders on Dec. 29 at Xcel Energy Center. (MHM Photo / Jeff Wegge)

At this stage of his career, the free-agent former Gopher is not worth the risk.

Before you close out this window and vow to never read my articles again, I hope that I can get you to see my point of view.

First of all, it’s not that I don’t think Vanek is an exceptional hockey player. His lowest point total in a full NHL season is 53 points. He’s been an impact player on every team he’s been a part of from the USHL to the NHL and every team in between (including the Golden Gophers … yes if you weren’t aware he’s also a Minnesotan, kind of).

However, Thomas Vanek is 30 years old which means as good as he is and has been, statistically, his numbers are only going to decrease from here. Take, for example, Dany Heatley. At 30 years old he recorded 64 points in his final season with the San Jose Sharks before being traded to the Minnesota Wild. Since that time he’s never even come close to recording that kind of season.

He’s gotten slower, been relegated to the fourth line and, at times, he was even benched. Heatley made $5 million (base salary) last year with Minnesota. The final year of his six-year, $45 million dollar contract that Ottawa gave him and which has since been passed around between three teams, the last of which was Minnesota.

Daniel Schwartz (no relation that I know of) of the CBC recently wrote an article illustrating this very point. In it he cites a study done at the University of British Columbia of players’ statistics over that last 14 NHL seasons. The study breaks down each position and shows a “significant decline (in forwards) in their early 30s.”

This is not to say that Vanek couldn’t be another Teemu Selanne or Jaromir Jagr. It is to say, however that he should be paid like that and not what I believe he will most likely be asking for.

One would figure he’ll get a few offers of that or more from NHL teams. Which means the Wild would have to pay him in the neighborhood of $7.1 million per year (maybe a little less if they can convince him to take a “hometown discount”) and that’s a lot of money for a guy who’s skills will more than likely deteriorate over the length of the deal.

And then there is the fact that the Wild have a host of veteran and younger players who they will want to pay over the next few season. Before the 2014-2015 season they will have decisions to make on 13 restricted and unrestricted free agents, which include the likes of Nino Niederreiter, Dany Heatley, Matt Moulson, Clayton Stoner and Ilya Bryzgalov.

Before the 2015-2016 season RFA/UFA’s include Charlie Coyle, Mikael Granlund and Erik Haula. While I will not attempt to figure out dollars and cents of future NHL seasons you can see that adding Vanek will make the proverbial pot a lot smaller to try a sign some of the younger players that are coming into their prime.

While Vanek would certainly add another scoring threat and a great one at that, I would argue that is NOT the greatest need for this Wild team. With Zach Parise, Jason Pominville, and others locked up in contracts for years to come and with younger players continuing to grow, scoring is not the biggest issue, a good defense to stop opposing teams is. That will start with some help on defense and end with a franchise goaltender.

At this point we are not sure if Darcy Kuemper is that guy. He showed flashes this season but also had a few concerning injuries. If he is not, then that should be priority number one for the Minnesota Wild. That can be tough since free agent stud goalies are hard to come by, but this would be the offseason to try and find one — and at a value, with guys like Ryan Miller, Jonas Hiller, Jonas Gustavsson and Thomas Vokoun all available. This offseason also happens to be one in which not a lot of teams will be looking for back-stoppers so the Wild could get a good one at a great price.

Frankly, I think that will be money better spent.

Thomas Vanek is a great hockey player, in fact one of the more impactful in the league, but there are other teams that can afford to pay him and not mortgage the future of the franchise in the process. The Wild won the Parise/Suter sweepstakes two years ago and hit the jackpot. This time around, in poker terms, it might be best for Craig Leipold to sit this hand out.