Schwartz: A Shoutout for the Shootout 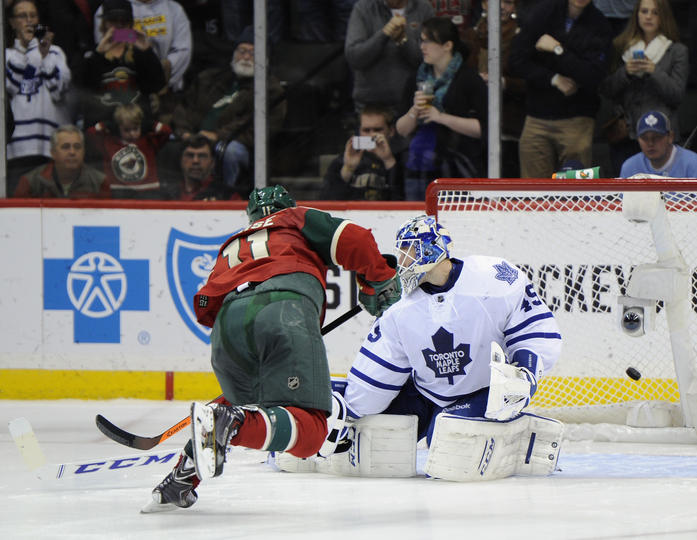 Love them or loathe them, the thrill factor can’t be ignored … 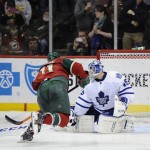 Featured Image:
Zach Parise #11 of the Minnesota Wild scores a goal on Jonathan Bernier #45 of the Toronto Maple Leafs during the shootout of the game on November 13, 2013 at Xcel Energy Center in St Paul, Minnesota. The Wild defeated the Maple Leafs 2-1 in a shootout.
(Photo by Hannah Foslien/Getty Images)

There are few things more exciting in hockey or sports in general than the ice hockey shootout. Literally, it doesn’t matter; college, pro, Olympic, men’s or women’s, if you see a shootout on TV you’re not changing the channel. And if it’s live your eyes will stay peeled.

After the 2004 lockout the NHL was looking for a way to bring the fans back to the game and capitalize on the excitement of the “must win or must lose” mentality of Olympic hockey.

Reaction has been as polarizing as the act itself. Like the puck, you’re either in or out when it comes to the shootout. Some fans love the fact that there will always be a resolution to any given game on any given night (I mean is there anything worse than plopping down $50 to see a tie?! When did a soccer game break out?! (Sorry if you love soccer)). Other fans despise the fact that essentially it becomes a signal of our “everybody wins” society: “Congrats on NOT losing! Here’s a point”.

If you’re reading this article it’s because you seek my opinion or you clicked on the wrong link, either way here is my thought: The shootout is fantastic.

First, I like the fact that teams get a point. Yes it rewards you just for hanging around through an OT period, but in a league where one point can separate you from playoffs or playing golf, it breeds parity. Some years the margin for that eighth spot is tiny. Rarely does that team make it to the Stanley Cup final, so if it’s Columbus one year and Florida the next it’s nice to see other teams get a shot at making a run, getting a “chip and chair” so to speak. Teams and the fan base should get a chance to live playoff hockey.

The caveat to this is the Big Ten’s rule on the shootout, which frankly is ridiculous. Because the NCAA doesn’t recognize shootouts, the Big Ten awards the points for league standings only so the point only counts in YOUR league—which is to say not at all. Even if you win the league you still have to win the post season tourney to get a NCAA bid. So while points help in conference seedings, standings, etc, it does little for the ultimate goal in college hockey; and NCAA title.

The second reason I love shootouts is … ties stink. You know it, I know it, and everyone knows it. No one gives a trip to Disney Land to the guy that tied. We live in a world where good and bad and right and wrong exist and people want resolution. A shootout at least gives you that.

Third, shootouts are that one moment where NHLers and the average hack are almost equal. Listen, I can’t skate as fast as Zach Parise, stick handle like Sidney Crosby or shoot as hard as Zdeno Chara, but if we all get the chance to saunter in 1-on-none against a goalie I at least have as much of a chance at scoring as they do (statistically speaking). That’s what’s so great about it, we’ve all practiced the moves at length on the pond, before and after practice, or with a tennis ball on the drive way and we all know that feeling of skating in with a move in your head trying to beat the goalie. It’s that moment where we can be equal with the stars we look up to.

And finally, shootouts are exciting. They give us amazing moves like, this from Pavel Datsyuk during the lockout. [youtube id=”5h55X3uJU84″ width=”620″ height=”360″]

Guys get creative and inventive and it’s thrilling. Face it, there is nothing more exciting in hockey than seeing a skater vs. goalie whether it’s a shootout or a breakaway. It’s like the NBA finishing off an OT session with slam dunk contest or if the NFL decided a deadlocked game by having a ‘Hail Mary’ contest. They don’t, but hockey does.  The NHL has taken the most exciting and dazzling aspect of its game and give it its own act, it made a killer side dish a main entre.

Shootouts are thrilling and maddening all at the same time. But while you can argue how they should or should not affect the game, you cannot argue their excitement. Like the shootout itself, that argument has no defense.