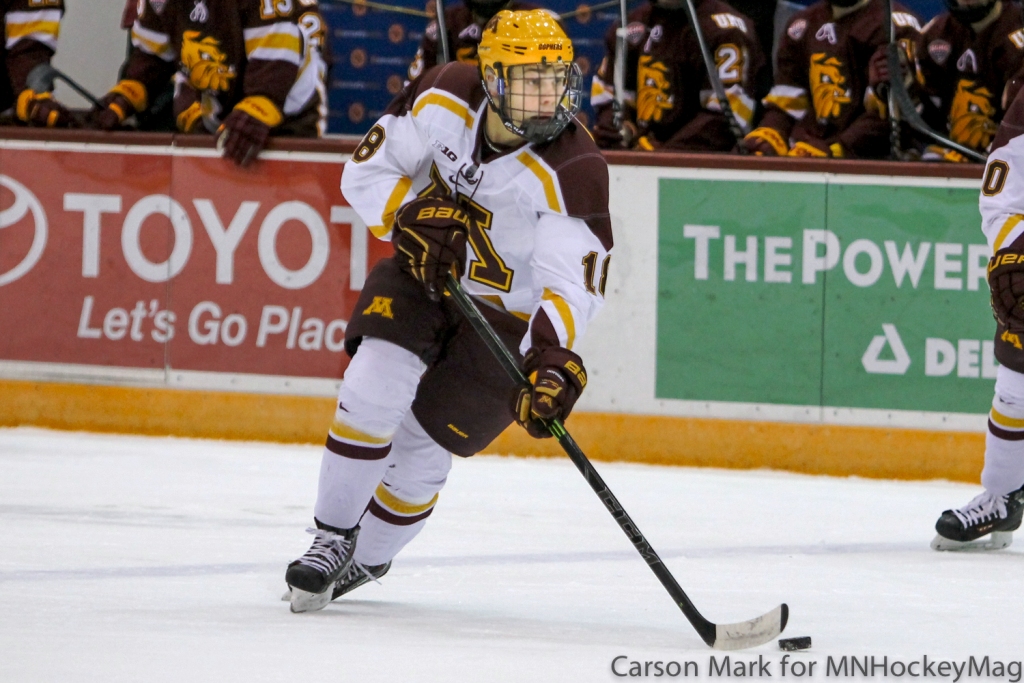 Minnesota freshman F Leon Bristedt is living out a dream playing for Sweden in the WJC but has even higher international aspirations. (MHM Photo / Carson Mark)

The World Junior Championships are taking place this week in Canada and for the 22nd consecutive time and for all but one of the tournaments, Team USA is stocked full of Golden Gophers. But it’s the one non-USA player to whom this tournament might mean the most.

Freshman Leon Bristedt, who is suiting up for his home nation of Sweden this week says wearing his countries color is a huge deal

“It’s a dream come true,” the Stockholm native says. “This is something that you dream of as a kid in Sweden when you’re watching all those great players and they are playing in that tournament and it’s something that I want to do.”

Bristedt is experienced in international play. But this time around is a little different. Bristedt isn’t playing in the Swedish junior system, he’s having a phenomenal freshman campaign here in America. The coaches of team Swedish team have been keeping track of him, showing just how important they believe Bristedt is to Team Sweden.

“Our coach has been doing a lot of scouting and even gone to St. Cloud to see what the atmosphere is like.”

And to see what the style of play is like and how Leon has adjusted to it. Bristedt has been only been playing college hockey for a few months but has learned to change his style based on the American system. So switching back to the style he grew up playing will be a bit of a challenge.

“I’ve been over here for 6 months so going back to Swedish style is going to be a little different,” Bristedt admits. “In Sweden you never give up the puck. Not much chip in, chip out…we really take care of the puck. If we can’t enter the zone with possession then we turn away and go back home and try to regroup.”

His college coach, University of Minnesota men’s coach Don Lucia, is well aware of all that goes into the World Junior Championships and understands the honor of being a part of it. He coached Team USA last year, ironically, in Sweden.

“The best way I can liken it is, two weeks of Super Bowl. That’s how big it is up in Canada,” Lucia says. “Every game will be sold out. It will really be a great environment and a great place to test your level and ability.”

Which is exactly what Bristedt will be doing against his own Minnesota teammates. Fellow Gophers Ryan Collins (his current roommate) and Hudson Fasching will be across from Bristedt playing for Team USA this week. Always the consummate professional, Leon has taken the time leading up to the WJC to help his current teammates learn Swedish slang so they can properly trash talk to each other during the games.

“I’ve taught him some Swedish words that he can use to chirp us,” Bristedt beams quite proudly. “I can tell you I taught him to say ‘fatty’ and some other words I cannot repeat here.”

While he’ll be meeting more than a few new Swedish faces this week, there will be one teammate that needs no introduction, Adam Brodecki. The two have not only grown up playing together, they are from the same hometown and even born in the same hospital room just a month apart, according to Bristedt.

“We went to kindergarten together, went to the same school, played on the same hockey team and now we’re playing for the World Juniors together,” Bristedt smiles. “It’s so cool that I am going to play World Juniors with my best friend.”

Leon Bristedt has a lot more to accomplish in the next few years at the University of Minnesota and this experience will clearly have an impact on him and his play. While the World Junior Championship is a big deal in the United States, the NHL is always the ultimate goal. In other countries, it’s international play like the World Junior Championships. Bristedt has now taken the first step, with great honor and humility. A few more stand out years at the U of M and maybe he’ll reach his ultimate goal.

“The only hockey tournament that is bigger (than this) is the Olympic games.”