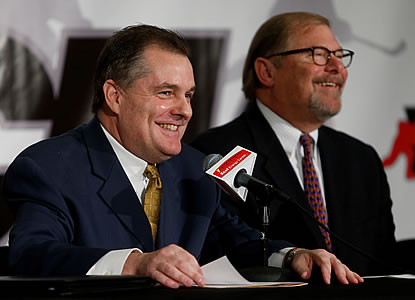 The leaves are turning, the road construction is slowing down and the temperatures are getting colder, which means only one thing; hockey season is about to begin again.

In the college hockey landscape of the Midwest the WCHA had been king for years. The rivalries were second to none and always guaranteed to be both heated and quite competitive. Then two years ago that all changed. Popular teams like Minnesota, North Dakota and Wisconsin left for other conferences and with them went a large Midwest fan base.

It never fails, at least once a hockey season for the past few years I get asked the question: “What happened to the WCHA?”

I usually tell them that it’s still around and that it’s competition level is just as good as the NCHC’s and Big Ten’s of the world, but since they lost some teams that had major interest here in Minnesota it has, in some peoples mind, taken a back seat in the world of men’s college hockey.

Now there is a new man in charge of the WCHA, and he’s very much committed to changing that mindset. The name Bill Robertson will be familiar to most Twin Cities sports fans. He’s been an executive with the Timberwolves and the Minnesota Wild as well as with the Anaheim Ducks.

And in the interest of full disclosure, he is one of my very good friends, which is why, when I heard he was taking over the WCHA I knew that the league was in good hands.

“I have a huge learning curve with everything WCHA and have reached out to so many people in the conference” Robertson admits. “We are really a newer league in some respects with competitive teams and top-notch competition.”

Robertson is a man who understands what is important in life and how to best position his interests for success which is exactly why his first act as commissioner was to move the WCHA headquarters back to Minnesota. Not just because this is where Robertson has the most connections, but because he can remain in connection with his family; his daughter, sister and father still reside in the Twin cities.

Sure, he had other opportunities in the sports world between his time with the Minnesota Wild and the WCHA, but they never fit his perfect criteria, remaining in the Twin Cities.

“Having our offices now based in Edina (Minnesota) will also help our operation from a business perspective and [give us a] base to operate. We are hopeful of increasing league revenues, adding exposure through many new and unique media platforms.” Robertson says. “The WCHA men’s commissioner position seemed like perfect fit and I really wanted the position to be based in the Twin Cities to be a close to my family.”

It also guarantees to be the perfect challenge. Robertson believes in the long-term success of the WCHA on both the men’s and women’s sides, but knows that the majority of fans in this market have allegiances elsewhere. The league is off to a good start, they once again will have the league’s tournament, “The Final Five”, back in St. Paul this year at the Xcel Energy Center and Robertson hopes to continue to increase their visibility.

“The WCHA overall has to do a much better job of showcasing our conference as there is so much confusion in college hockey, in the media, sponsors and fans these days as to which schools are in which conferences such as the WCHA, Big Ten of NCHC,” he says. “There is lots of confusion in the marketplace and footprint of college hockey overall and across the United States. We are hopeful of keeping our conference stabilized and on target to compete for berths in the Frozen Four.”

Exposure is good, but winning is better and Robertson knows this. Last year two WCHA teams made the NCAA tournament and they are hopeful they can increase that number in 2015. They also are looking to increase rivalries – which is what made the old WCHA so great—and that takes the most time when re-establishing a league.

The WCHA already has well-established rivalries but what excites Robertson the most is the rivalries that they have absorbed from other leagues, with teams now a part of the new WCHA.

“We do not have some of the traditional teams that WCHA fans remember from the past, but we are trying to create new rivalries based on the schools we have currently in this conference that also includes several schools from the old CCHA,” Robertson said. “The WCHA has 1/6th of all Division 1 schools in all of college hockey and we also span five different time zones which shows we are impactful in Division 1 college hockey.”

Impactful, but in a way very much inexperienced. However, for purposes of the league’s growth that is not a bad thing. With Robertson at the helm there is promise and potential. His knowledge of hockey, paired with his marketing savvy will give the new WCHA and very strong chance to match the popularity of the old WCHA once again.