Despite plenty of blame to go around, Mike Yeo may take the fall 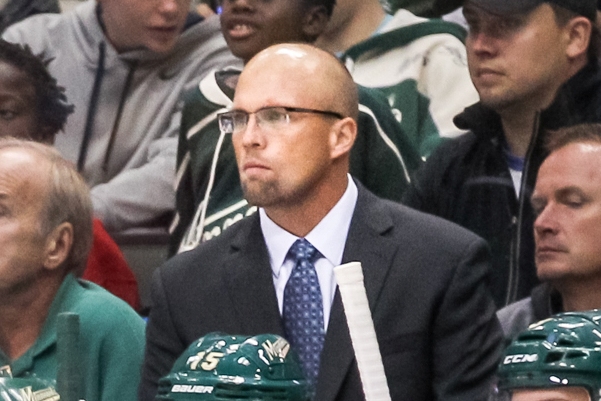 Despite plenty of blame to go around, Mike Yeo may take the fall

A year ago at this time, I wrote that the Wild should NOT fire Mike Yeo. That his system is a good one, that he knows the game and that this locker room still believed in the system Yeo was trying to sell.

A year later with the Wild in a somewhat similar spot, I’m not so sure.

I still believe and know that Mike Yeo is a good coach. He is a phenomenal leader and one of the smartest hockey minds out there. He has grown here as a head coach, he has learned on the job and I have very little doubt that he’ll go somewhere else and be successful. But none of those reasons are ones to keep a coach that has lost his team. And I’m afraid that he has.

I don’t blame Mike Yeo solely. I blame every player that is under achieving, I blame Chuck Fletcher for not addressing the biggest needs this team has had for the past 3 seasons: getting a franchise goaltender. I blame the beer guys for not selling enough to make fans happy—and don’t even get me started on the pretzel guy. Yes, its ridiculous sounding but it’s just as much everyone else’s fault as it is Mike Yeo’s.

But you can’t fire the entire organization. You can only let go of the coach.

Mike Yeo has done everything that he possibly can with the guys that he has. He’s stood by them publicly when they were floundering (Thomas Vanek), he’s challenged guys when he knew they were capable of better (Darcy Kuemper) and finally last week he went “Herb Brooks” on the entire team; screaming expletive’s and making them skate sprints before breaking his stick and leaving the ice.

It was one last desperate move from a coach who had no other card to pull.

But once you pull THAT card, there is nowhere else to go and since that game the Wild have lost three straight. A few guys have gotten the message, but, by and large, Sunday’s game in Chicago featured a Blackhawk team that was exhausted from a long road trip having played 5 games in 8 nights and the Wild, who played two at home and then hopped a 45 minute flight and looked like they’d flown for three days.

When Yeo left practice that day, I wondered how the team would react. I heard a few players say they thought it was “a good thing” and that “the guys got his message. But I heard one player (who I won’t name) say that Mike had “lost it” and that before this he’d been “good” about dealing with the team. Which implies his tirade was bad? To me, that’s dissent in the locker room and as we all know a divided locker room cannot stand.

The team that skated in Chicago on Sunday night was not just divided; they were crumbling and searching for answers. And while Mike Yeo has them and more than likely told them to the team; his advice, logic and knowledge is falling on deaf ears. It’s not his fault that it is, but it’s clear that it is.

But here is my major problem with firing Mike Yeo: A new coach isn’t going to turn this thing around. Sure players that weren’t listening before might start and a breath of fresh air could be a good thing. But this would be the Wild’s fourth coach in the last seven years and the last two have dealt with the same issues. A roster that wasn’t good enough to compete.

The difference is that Yeo was given more and because of it has increased his win percentage each of the first three years he’s been in Minnesota. But there is one key thing that both he and Todd Richards had in common: a lack of consistently good goaltending.

Compare that to the Los Angeles Kings who have had goalies finish with a goals against average under two for each of the last three seasons, two of which they won a Stanley Cup. Goaltending matters in the NHL like quarterback play does in the NFL, you simply cannot win without it.

If the Wild are going to fire Mike Yeo now, in a week, in a month or after the season – if they want real change there has to be more. Yes, get a coach that knows the game well and know how to win, but you MUST get rid of any bad apples in that locker room and find a goaltender who can win more than a few games without having an epic meltdown.

Yup, Mike Yeo’s message may be lost on these players, but in order to make sure the franchise gets the message and goes in the right direction, real changes must occur and it has to be more than just a change in coaching.