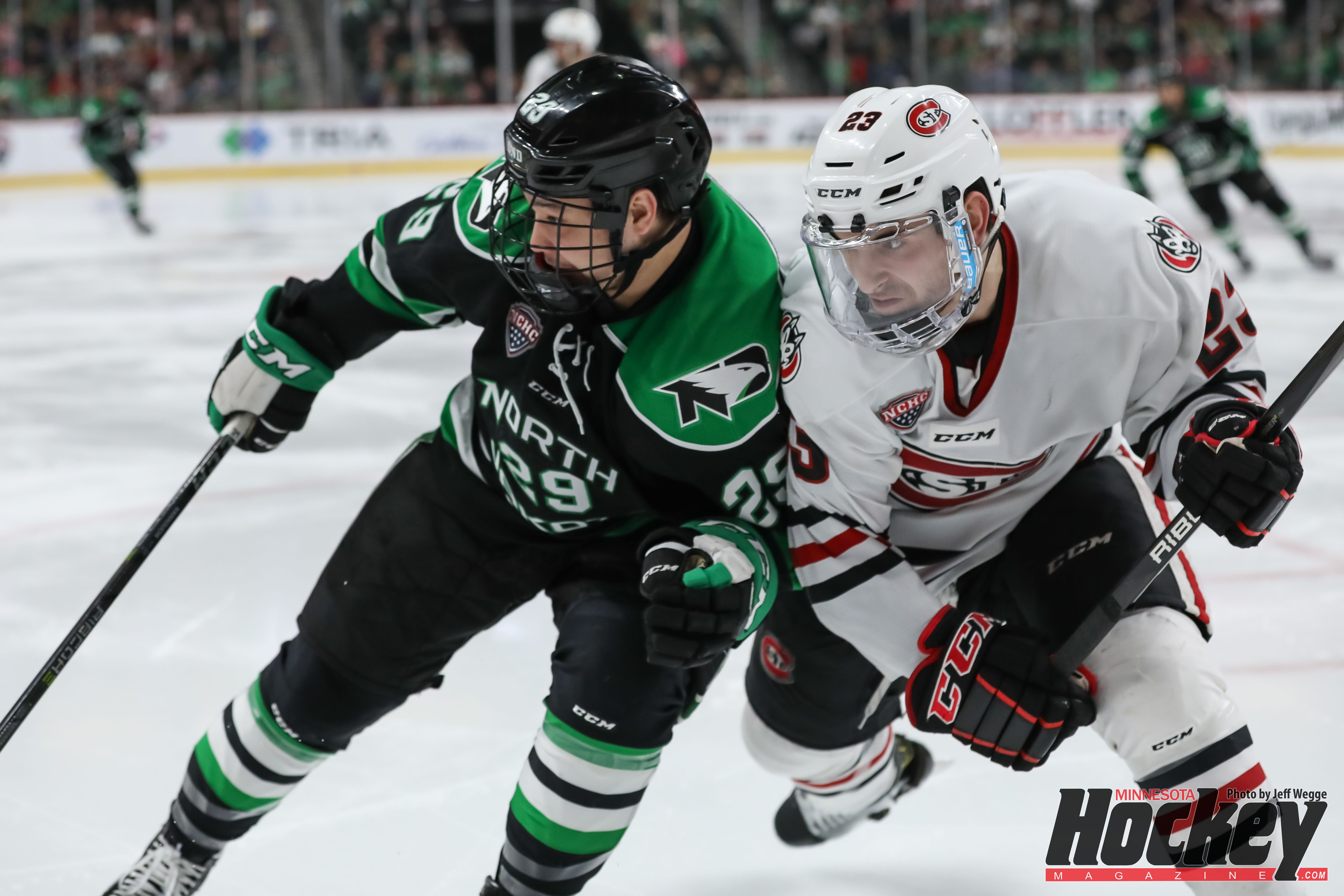 People from top-ranked St. Cloud State had no illusions that they would encounter anything but the stiffest of tests going into their NCHC Tournament semifinal opposite 14th-ranked North Dakota.

Huskies coach Bob Motzko said he laughed out loud when someone from the media asked him before the game if the Fighting Hawks might be extra motivated against the Huskies because they needed a win or two in this tournament to advance to the NCAA playoffs.

“Do you ever not get an intense game from North Dakota?” Motzko said.

Motzko nailed it: St. Cloud required a goal from former Lakeville South High School standout Nick Poehling just 1:47 into overtime to slip past the team formerly known as the Fighting Sioux in the matinee semifinal game Friday afternoon at the Xcel Energy Center.

“The puck came right to me,” Poehling said. “I just shot it, and I guess I got a little bit lucky.” 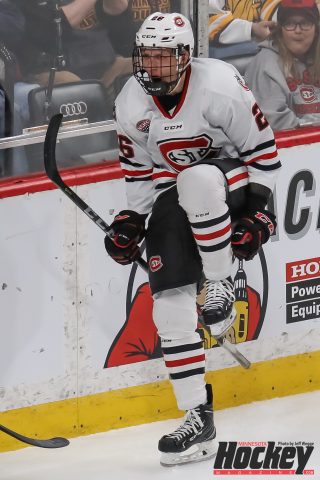 Easton Brodzinski celebrates after scoring a goal to give his team a 2-1 lead over North Dakota at the NCHC Frozen Faceoff (MHM / Jeff Wedge).

The game-winning goal came after a North Dakota turnover allowed St. Cloud State to turn aside a fierce comeback that enabled the Hawks to tie the score 2-2 midway through the third period.

That, too, was no surprise even though the Huskies appeared to be in control  with a 2-1 lead through two periods after getting goals from Patrick Newell and Easton Brodzinski while outshooting North Dakota 21-14.

The Fighting Hawks, staying afloat thanks to a tremendous game by goaltender Cam Johnson, came out for the third period according to junior center Nick Jones with a plan to apply strong pressure on St. Cloud and keep at it.

For awhile, they had the Huskies on their heels.

Motzko wasn’t happy, but he wasn’t surprised, either.

“As well as we were playing, we were on the verge of getting knocked out,” he said.

But he knew advice was uneccessary after St. Cloud State, which had the benefit of winning and losing in its two overtime games against Miami (Ohio) in the first round of the tournament a week earlier, traipsed into its locker room after the third period.

His players knew the score.

“There was no coaching going into overtime,” he said.

Just a costly turnover and it was over in a hurry.

North Dakota coach Brad Berry, whose team is a longshot at best for the NCAA tournament going into Saturday’s third-place game, said turnovers cost the Hawks all afternoon.

“They have a really talented group that can kill you if you don’t take care of pucks,” Berry said.

St. Cloud finished the day with a 34-23 advantage in shots on goal and could have put the game away early if not for 31 saves by Johnson. In the end, even though they had already locked up a berth in the NCAA tourney, the victory has SCSU in the conference tournament final.