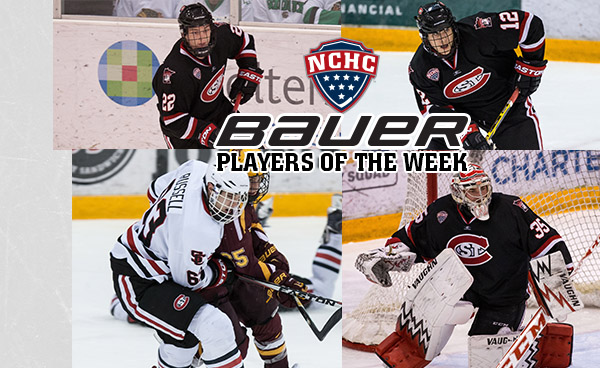 COLORADO SPRINGS, Colo. – The National Collegiate Hockey Conference (NCHC) announced its Bauer NCHC Players of the Week for the week of Jan. 26-Feb. 1 on Monday with St. Cloud State sweeping all four honors. The winners for week 15 of the season are SCSU junior forward Jonny Brodzinski for Offensive Player of the Week, Huskies junior blue liner Ethan Prow for Defenseman of the Week, SCSU freshman forward Patrick Russell for Rookie of the Week and sophomore netminder Charlie Lindgren for Goaltender of the Week. Russell and Lindgren are both repeat winners from last week with Russell claiming Rookie of the Week for the third time this year. Like Lindgren, Prow has now won his honor twice as well this season.

Brodzinski exploded for six points (five on the power play) to lead SCSU to a sweep at Colorado College, tallying four goals and two assists with two goals and a helper in each game. In Friday’s 7-1 win, the L.A. Kings prospect was named the game’s second star after tying a career high with three points and putting seven shots on goal. All of his points came on the power play in the second period Friday, sandwiching two goals around a primary assist as SCSU scored three times in four minutes. The next night he again tied a career high with three points, while being named first star of the game. In the 6-1 victory Saturday, he had four shots on goal while scoring the game-winner on the power play in the second period to break a 1-1 tie, which was his 100th career point. He added another goal in the third period to make it 3-1 and assisted on a power play goal later. Brodzinski totaled 11 shots on goal in the series and was on the ice for all six SCSU power play goals against CC.

Prow was effective at both ends of the ice in SCSU’s road sweep of Colorado College after missing the previous five games with an injury. He handed out six assists in the series, while helping limit the Tigers to just two goals all weekend. In Friday’s 7-1 victory, he dished out a career-high three helpers to tie a career high with three points, assisting on the game’s first goal and then a pair of power play goals later in the contest to extend the lead. He was named the game’s third star Friday. The next night Prow again matched his career high with three assists, setting up the game-winner on the power play in the second period to break a 1-1 tie, while he also assisted on the game’s final two goals. He put five shots on goal, blocked a shot and had a +2 rating in the win as he was again named third star of the game. Prow finished the series with a +3 rating, while helping limit CC to 46 shots on goal in the series and killing five-of-six Tiger power plays.

Russell continued his recent scoring prowess with a two-goal, three-point outing in a sweep of Colorado College. In Friday’s 7-1 victory, he scored the game’s first goal only 1:14 into the game, while putting five shots on goal and posting a +1 rating. The next night, Russell had a hand in the final two goals of the game, scoring the Huskies fifth goal on the power play while assisting on the last goal in a 6-1 win. He extended his goal-scoring streak to four games with the tallies. Russell put six more shots on goal in Saturday’s win, giving him 11 on the weekend, while he was also +2 on Saturday and finished the series with a +3 rating. He blocked two shots in the series, as well.

Lindgren repeated as Goalie of the Week after backstopping SCSU to a pair of wins at Colorado College, surrendering just one goal in each game. He compiled a .957 save percentage in the series and a 1.00 goals-against average, while helping the Huskies kill five of six CC power plays in the series. On Friday, he stopped 21 of 22 shots with the only goal allowed coming on a 5-on-3 power play midway through the third period after SCSU was already up 7-0. The next night, he made 23 saves with the only goal allowed coming early in the game before shutting the Tigers down the rest of the way as he earned second star of the game in the 6-1 victory. For the weekend, he stopped 44 of the 46 shots he faced.