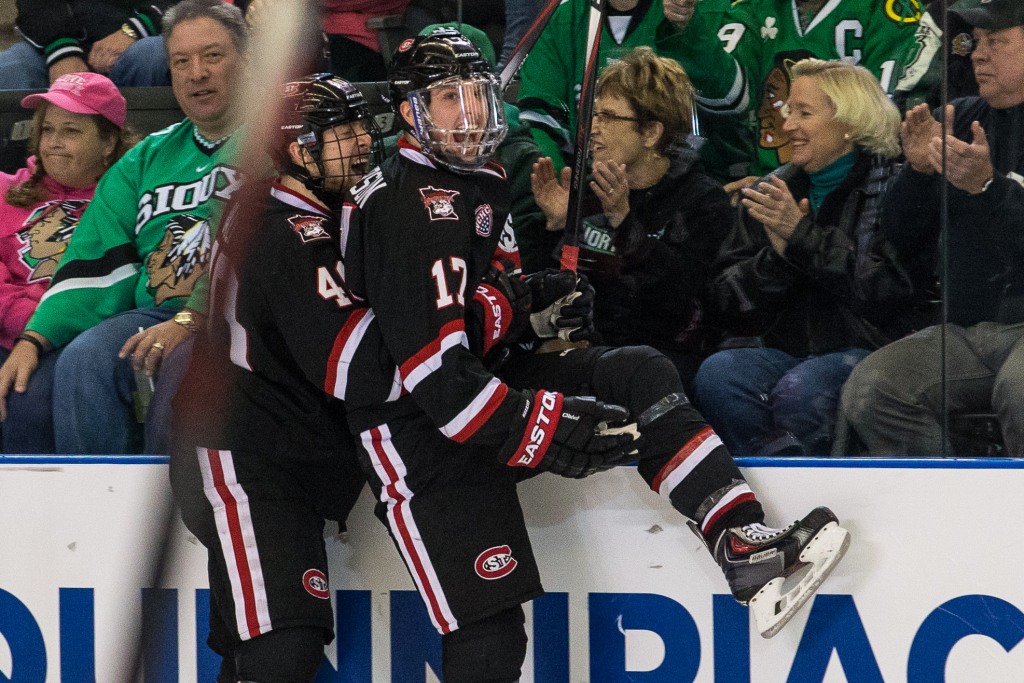 Fargo, N.D. — Charlie Lindgren probably wouldn’t have minded stopping another puck to help his team win the game, after all, he’d done it for the prior 67 minutes.

But waiting for the opposition to commit a costly error worked just fine for Lindgren and St. Cloud State.

Lindgren was fresh off a toe save, a sprawling dive across the crease to block another shot and Michigan Tech had more pressure brewing inside the SCSU zone.

Tech defenseman Riley Sweeney slipped and fell as the puck slid past him at the blue line.

SCSU’s Joey Rehkamp grabbed the puck, got it to teammate Peterson who scored to give No. 3 SCSU the 3-2 win over second-seeded Michigan Tech in the NCAA West Region semifinals Friday evening at SCHEELS Arena.

“It’s obviously huge right now, but we have to just enjoy it for a little bit and then park it and start preparing for tomorrow and be ready to come out at the start tomorrow,” Peterson said. “Whoever we’re playing, Quinnipiac or North Dakota, we have to be ready to jump on ‘em right away from the starting faceoff.”

The Huskies move on to face the North Dakota/Quinnipiac winner at 8 p.m. Saturday at SCHEELS Arena for a Frozen Four berth.

But for a majority of the game, it appeared the other team nicknamed Huskies might be headed to the regional final.

SCSU trailed 1-0 and its best offensive threat, Blaine native Jonny Brodzinski, needed to be helped off the ice and missed the last 15 minutes of the first period.

He returned for SCSU’s only bright spot of the second period, a Kalle Kossila power-play goal at the 1:06 mark on a man advantage that carried over from the first period.

Kossila’s goal was the only recorded shot on goal for SCSU in the second period, but perhaps more fascinating was the fact that the period ended in a 1-1 tie.

Lindgren, the Lakeville native, stopped all 14 shots he faced in the second period and many of them were the kind that can make a fan’s heart stop, and a goalie’s teammates appreciate his efforts a little more.

“We’ve been leaning on him this whole year, really,” Brodzinski said. “He’s been outstanding.”

SCSU carried the play in the third period, outshooting Tech 10-4, and didn’t put Lindgren’s heroics on hold until overtime.

But Michigan Tech broke the 1-1 tie on a goal by CJ Eick off a nice backhand feed from Joel L’Espereance for an easy tap-in by Eick.

SCSU coach Bob Motzko pulled Lindgren with two minutes left after each team took minor penalties with 2:48 left. The extra attacker gave SCSU a 5-on-4 advantage in the offensive zone.

Tech came inches from burying SCSU when one shot hit the post and another from center ice whizzed by the left pipe for an icing call.

“The hockey gods were on our side,” Lindgren said.

SCSU’s pressure had the Tech defense stretched out in the final minutes and goalie Jamie Philips sprawled out to the side of the net, trying to cover the puck.

Patrick Russell got a hold of the puck for SCSU and slid it over to Brodzinski in the left circle and he put the puck on net from the low angle.

“Their goalie didn’t really have the puck and Patrick just kicked out to me on the back door,” Brodzinski said. “The goalie didn’t have time to scramble back over and I think it went off their defenseman’s shin pad and in.”

The goal was his 21st of the year.

In overtime, SCSU needed to lean on Lindgren just a little more. He needed to make a save with his right toes on a bouncy puck and minutes later, he sprawled across the crease to stop another chance.

“Charlie Lindgren. He was MVP of the game, for crying out loud. He was outstanding,” Motzko said. “You throw it at him for holding the fort down.”

Added Lindgren: “I have another game like that in me. Absolutely. Whichever team we play, it’s going to be tough, but absolutely.”

And all the desperation paid off at the 8:11 mark of overtime when Sweeney fell down, and SCSU’s fastest skater Rehkamp grabbed the puck and headed for the Tech goal.

Rehkamp led the 2-on-1 up the left wall and got the puck to Peterson, who finished it from there.

“I didn’t have really a lane to get it back to Rehkamp,” Peterson said. “I was going to try to get it back to him but I tried shooting it and it got blocked and it came right back to me and the five-hole was wide open.”