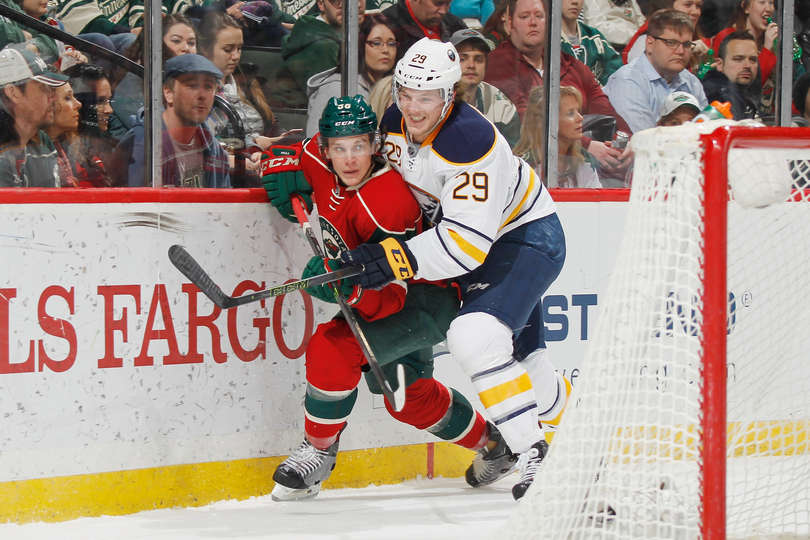 St. Paul – Remember the good days, back when the Wild traveled to Dallas and came away with a 2-1 win over the Stars?

In truth, it was way back on Jan. 9. That victory gave Minnesota a 22-11-8 record. Their 52 points represented the best half-season mark in franchise history.

But oh, how things have changed.

Yes, the Wild still have a cushion in the NHL playoff race. But hopefully, for their sake, in the event of a crash, “cushions can be used as flotation devices.”

Because if the Wild’s difficulties over their past two games are not temporary, this team just might be headed for a crash.

“It’s a humbling league,” Wild coach Mike Yeo said. “A couple of games ago we were feeling pretty good about ourselves. Obviously, not so much today.”

The Wild’s latest bit of inadequacy occurred Tuesday night when the Buffalo Sabres, who came into the Xcel Energy Center with the second worst record in the NHL, grabbed a 3-0 first-period lead and hung on to defeat the Wild 3-2.

“The game was lost there, right away,” Wild winger Erik Haula said.

Haula set up Ryan Suter for Minnesota’s first goal, a short-handed marker in the second period, but the Wild did not score again until the final minute.

This game was unwatchable enough that by then, more than a quarter of the 19,034 paying customers had vacated their seats before the Wild pulled goalie Devan Dubnyk for an extra skater. Thomas Vanek’s final-minute goal only made it close.

This game was not unlike the Wild’s 2-1 loss to the New Jersey Devils Jan. 10. Factor in a 4-3 overtime loss to the Philadelphia Flyers Jan. 7 at the X and the Wild have dropped three in a row at home.

Suter, who said the Wild “took the first period off,” had trouble pinpointing his team’s problems of late.

“We were starting to play the way that we needed to play to build and get ready for the next step,” he said. “It seems we kind of took the foot off the pedal.”

Buffalo had a 1-0 lead on a Jamie McGinn goal before Rasmus Ristolainen and Brian Gionta beat Dubnyk just 20 seconds apart late in the first period.

It was too big a deficit, and Wild captain Mikko Koivu was not happy about it.

“Emotions are high after a loss like that,” he said. “It’s better to not say anything about it right now.”

Yeo, whose team has played eight games within 13 days, said he’s giving the players a day off Wednesday before they gather to practice again. He said the team needs practice, but the players also need to rest their heads and their bodies.

“There’s no excuses,” he said. “We’ve had two practices since Christmas, but again, we’re not making excuses.”

One thing Yeo can be expected to do at his next practice is remind his players to shoot the puck when they have a chance.

“This has been going on for awhile,” he said. “I can’t remember how many two-on-ones we’ve had where we don’t get shots on goal, let alone scoring chances. This is something we’re going to have to change.”

Yeo admitted that players are “a little bit frustrated, a little bit ticked off,” adding that he’s hoping that helps ignite a response.

“For the most part, up until this stretch we were pretty consistent,” Yeo said. “I just look at this last little stretch and it’s not an energy thing – I’m not going to blame that for sure. I think maybe it’s mental.

“But again, there are just no excuses. We have to be better than this. Good teams get through stretches like this and win hockey games still, and we didn’t do that.”