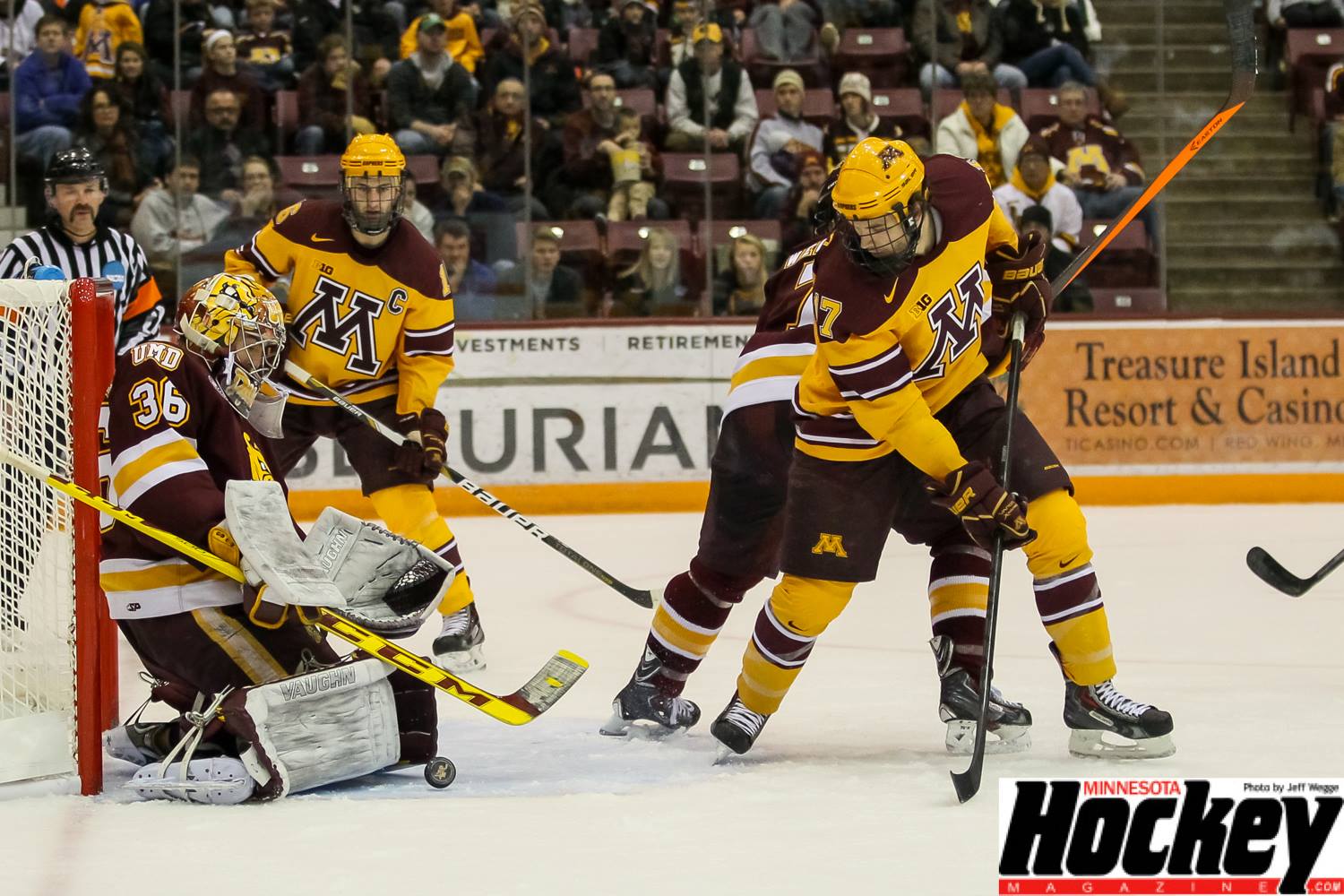 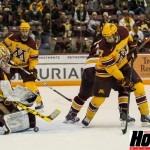 MINNEAPOLIS–Years from now when Seth Ambroz reflects back on his “welcome to Big Ten hockey moment” the story he will be able to tell will be nothing if not unique.

Just 8:15 into Friday night’s first-ever Big Ten hockey conference game at Mariuccia Arena, Ambroz felt the magnitude of its impact delivered by none other than teammate Tom Serratore. After whiffing on his intended target, Wisconsin defenseman Eddie Wittchow, Serratore collided violently with Ambroz as the two converged behind the Badgers’ net leaving Ambroz face down on the ice for a few minutes.

“When Tommy hits, he hits hard and I couldn’t breathe for a while there,” Ambroz said. “I was going northbound on a southbound freeway right there.”

The junior 6’ 3”, 215 lb. forward from New Prague soon recovered and, along with Serratore and fellow linemate Travis Boyd, led Minnesota to a come-from-behind 4-1 win over Wisconsin in the Big Ten’s inaugural contest. The trio combined for four points (2 goals, 2 assists), 11 shots and were a plus-5 on the night.

Not bad for a third line mostly known for its checking ability and playing just its third game together this season. Despite falling victim to Serratore’s miscue, Ambroz says he is having a lot of fun playing with his current linemates who each factored into one of his two goals against the Badgers.

“I feel like we bring a lot of energy, we’re a pretty physical line, and at the same time we’re able to get pucks to the net and they’ve been going in for us,” Ambroz said of his line which has accounted for 10 points (4-6–10) in its three games as a unit. “We cause turnovers and just kind of do a lot of the little things.”

Nearly seven minutes after Minnesota native Joseph LaBate (Eagan) scored the conference’s first-ever goal at 6:31 for a 1-0 Wisconsin lead, and five minutes after his collision, Ambroz tied the game from where he and Serratore met earlier.

Serratore’s sharp-angle shot from the left circle bounced off Wisconsin goaltender Landon Peterson right to Ambroz at the scene of the previous crime. Peterson, who turned aside 42 Gophers shots overall, failed to seal off the post and Ambroz exploited the opening by banking the puck off the back of the knee of the stunned Badgers goalie for his fourth goal of the season.

“That’s a little bit of a hockey IQ shot,” Minnesota coach Don Lucia said. “I’m sure if you ask him he did it on purpose but it was a good, smart play.”

“It kind of seemed like the goalie lost his footing and I wanted to see what happens,” Ambroz said, confirming Lucia’s assertion. “Coaches talk about throwing pucks at the net from bad angles all the time. I just tried it and was fortunate enough to get a nice bounce and put it in the back of the net.”

Wisconsin coach Mike Eaves, whose 267 career points (94-173–267) rank him at the top of the Badgers’ all-time scoring list, knows a thing or two about a scorers mentality and called Ambroz’s goal “a percentage play.”

“He was playing percentages that [Peterson] was off the post, hit him on the back of the knee and it went in,” Eaves said. “That’s a goal scorer’s goal, they play that percentage.”

Late in the game with Wisconsin surging and Peterson on the bench for an extra attacker trying to cut into Minnesota’s 3-1 lead, Ambroz, with Serratore alongside him, fired a shot into an empty Badger net for his second goal of the game. Lucia, too, was playing the percentages.

“That’s the line we wanted out there,” Lucia said. “They all three kill penalties (Wisconsin’s power play was 0-5 with eight shots on Friday), they’re good defensively and, with how young we are up front, they’re our most veteran group. It was kind of fitting for that line to get the open-net goal tonight.