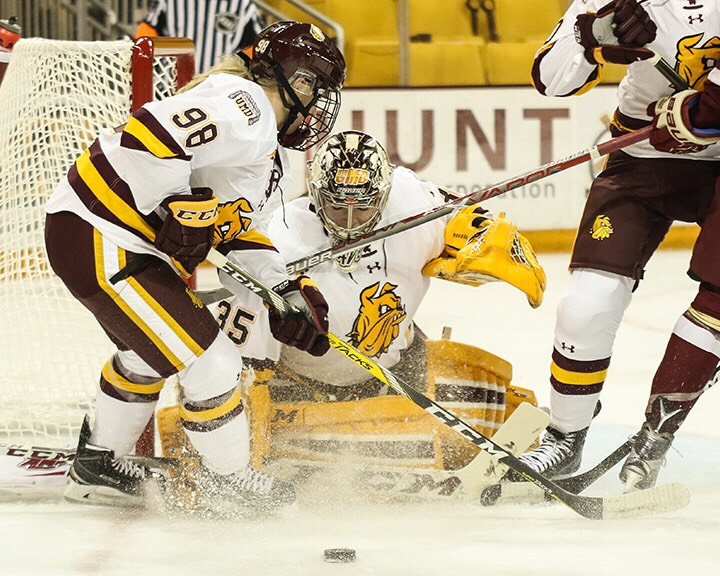 If the WCHA had a Breakout Player of the Year award, the midseason front-runner might be Duluth’s Maddie Rooney. The Andover native may also be the team’s midseason MVP, playing a huge role in Duluth being nationally ranked every week since going 1-0-1 against Boston College in the season-opening series.

Heading into the winter break, Rooney’s .940 save percentage ranks sixth in the nation and third in the WCHA. That’s even more impressive when you note no goaltender in the top 10 except North Dakota’s Lexie Shaw has started every game. And, outside of Ohio State’s Kassidy Sauve, no one has seen as many shots as the 546 Rooney has faced. The closest is Connecticut’s Annie Belanger at 492 shots against. In fact, six of the top 10 have seen at least 103 fewer shots than Rooney.

The height of her achievement grows when compared to her freshman campaign when she split time with senior Kayla Black. That season she posted a 3.18 goals-against average and .899 save percentage in 19 contests.

What precipitated the change? The soft-spoken sophomore chalks a lot of it up to maturity.

“I think getting a season under my belt last year gave me a lot of confidence,” she said after a recent game in Duluth’s AMSOIL Arena. “I’m not really looking over my shoulder this year, competing with upperclassmen. I think I’m definitely more confident this year.” 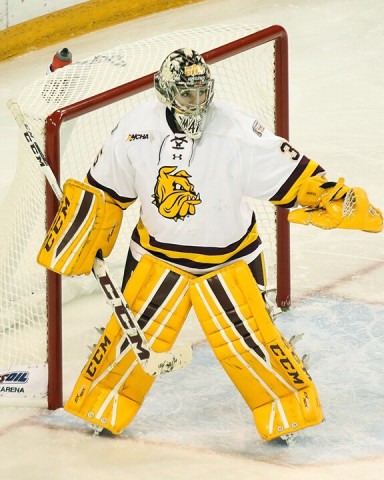 She has plenty to be confident about. Her career has resembled a video game in some ways. She has had challenges placed in front of her, conquered them, and quickly moved onto the next challenge over and over.

After a standout junior year at Andover High School, she moved to the boy’s hockey program for her senior season. She took to the challenge and shouldered a lot of responsibility. “I never really played with a backup,” she recalls.

The next season, she moved on to the challenge of the WCHA. Then, in her sophomore season, she has taken over starting duties and earned an invite to her first USA Hockey senior national team camp. She didn’t make the December Series team, but just getting invited to camp with Team USA is big. The goaltender rotation for the national team is seldom changing and the chance to challenge for a roster spot is significant.

“I think I learned a lot as a freshman. It was definitely a different style of game coming from high school into college,” Rooney says. “I was a little inexperience last year in the WCHA.”

The team clearly feels the difference. They beat the Boston College Eagles and the top-ranked Wisconsin Badgers. They also took the second-ranked Gophers to overtime at Ridder Arena. “I think we feel good about Maddie every weekend,” head coach Maura Crowell said after Rooney stopped 45 of 46 shots to beat the Badgers.

While Rooney deflects compliments, it’s clear she takes advantage of every opportunity placed in front of her. “Playing guys high school in my senior year definitely challenged me. It challenged me to play up to their level and get the speed of the game,” she says. “There are definitely harder shots and I thought that better prepared me for college.

“Also, off the ice was big too. I came in last year maybe not the most physically strong. I’ve worked on that and I think it shows on the ice too.”

Even now, finding a rhythm in a competitive league with a team leaning on her, she’s able to continue seizing opportunities. “We have a goalie coach this year,” she said. “We didn’t have one last year. I think he’s really doing a great job, especially after these games evaluating what I need to work on. Even the small things and I’m taking advantage of that in practice.”

Taking advantage of the opportunities is quickly making Rooney one of the toughest goalies in the WCHA and the Bulldogs are the benefactors. “I think we’ve made a name for ourselves,” Rooney says of the team’s 10-4-2 conference record headed into 2017. “It’s going to carry us through the rest of the season. I’m excited to see how it goes.”