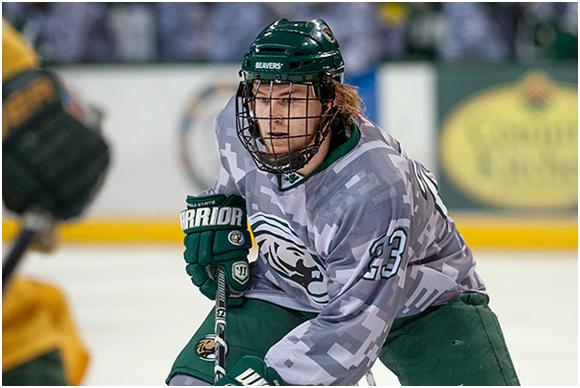 Opportunity knocked and Bemidji State’s Gerbrandt has greeted it with open arms. 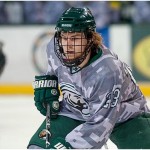 Before the start of the 2013-2014 season Bemidji State was faced with the question of who would step up and lead the team offensively. Twelve games in and the Beavers may have found an answer.

Sophomore forward Markus Gerbrandt has emerged into that role and has helped guide BSU to a 4-6-2 overall record and a second place standing in the WCHA thus far this season. Gerbrandt, who had four goals and an assist in his rookie campaign has doubled his point total from last season.

His eight goals and two assists not only place him first among his teammates in goals scored but his nine points in conference play have him tied for the WCHA lead.

“I’m getting more of an opportunity this year and I’m getting the chance to play more minutes,” Gerbrandt said, “My linemates and I have great chemistry and when you find that chemistry it makes things a lot easier for everyone.”

“I chose Bemidji State because I knew BSU was in one of the best leagues in the nation,” Gerbrandt said, “BSU was also the fist team that spoke with me in person when I was 18 years old and when a team shows interest in you and comes and visits you, it goes a long way.”

Gerbrandt was also named WCHA offensive player of the week after he scored his first collegiate hat trick that helped BSU to a series sweep over Alabama-Huntsville Oct. 25-26.

“Markus has played well,” Coach Tom Serratore stated, “He has a nose for the net and he has shown that so far in the early going.”

Like many hockey players, Gerbrandt is reluctant to mess with what could be considered ritualistic pre-game preparations. But when he does alter them it is based on team performance as opposed to his own individual play.

“If the team is having success, I just like to stick to my same game day routines,” Gerbrandt said, “I start getting ready at the same time before each game, same warm up, same stretches, if we get into a rut then I like to shake things up.”

Bemidji State looks to gain some conference points this weekend as the Beavers host WCHA opponent Lake Superior State Friday at 7:37 PM and Saturday 7:07 PM at the Sanford Center.