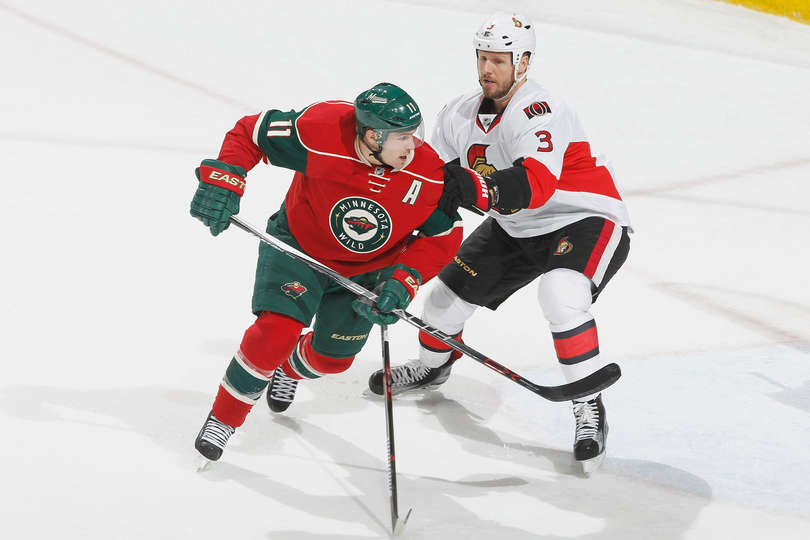 St. Paul – After a season-high six consecutive victories capped by a humongous win over the Chicago Blackhawks, perhaps the Wild were due for a letdown.

“I hope not,” winger Jason Pominville said. “We’re not in any position to have any letdowns right now. We can’t afford that.”

Still, the Wild needed nearly half of Thursday’s game against the Ottawa Senators to muster 10 shots on goal. They came from behind to tie the score twice on goals by Zach Parise and Erik Haula, but the Senators escaped the Xcel Energy Center with a 3-2 victory after getting a fluke goal with 3:57 to play.

“That’s unfortunate,” Parise said of the winning goal, which caromed past goaltender Devan Dubnyk after deflecting off Haula’s skate. “But I think you have to look at the game as a whole. Did we play well enough to win the game? I don’t know.”

They did not, according to coach John Torchetti, who said the line of Mikko Koivu, Charlie Coyle and Parise was his team’s lone consistent line of the evening.

“We didn’t come out with the strongest game,” Torchetti said. “You can’t play with really, one line. We had three lines that didn’t do a good job tonight.”

In addition, winger Thomas Vanek left the ice early during warm-ups and was not able to play because of an upper-body injury, and then Jared Spurgeon blocked a shot by Bobby Ryan on his second shift of the game and was unable to come back.

“That sucks,” defenseman Dumba said. “Spurgeon is a big part of our back end, and whenever you’re playing with five D, it’s hard.”

This game seemed to veer all over for the Wild, who defeated the Blackhawks 4-1 two nights earlier to extend their victory streak to six. Minnesota had seven shots on goal in the first period, came on strong after Parise’s goal midway through the second and then played hit and miss later.

“We just didn’t play a solid 60 minutes,” Torchetti said. “We have a lot of guys that have got to up their ante there. There’s no nights off in this league. We’ve got to be ready to battle, and I didn’t like our battle level.”

Said Parise: “I just don’t think we played as well as we needed to.”

The comeback was heartening to a vocal crowd of 19,032, but a quick whistle eliminated a possible goal by Dumba when it was 2-2 in the third period, and several shifts later Cody Ceci sailed past the Minnesota net, slid the puck in front and it ricocheted in off Haula.

“It’s unfortunate,” Pominville said. “We were able to bounce back and tie the game up, and then they get a fluke goal at the end, which is not fun when you battle that hard to get back into the game.”

Minnesota is down to its final four games and leads Colorado by five points, but missed a chance to open that gap to seven and also pull within two points of Nashville for seventh place in the NHL West.

The Wild get a quick opportunity to turn things around with a game against the Red Wings in Detroit Friday night.

“We have to be better tomorrow,” defenseman Jonas Brodin said.

After Thursday’s game, a letdown would be impossible.