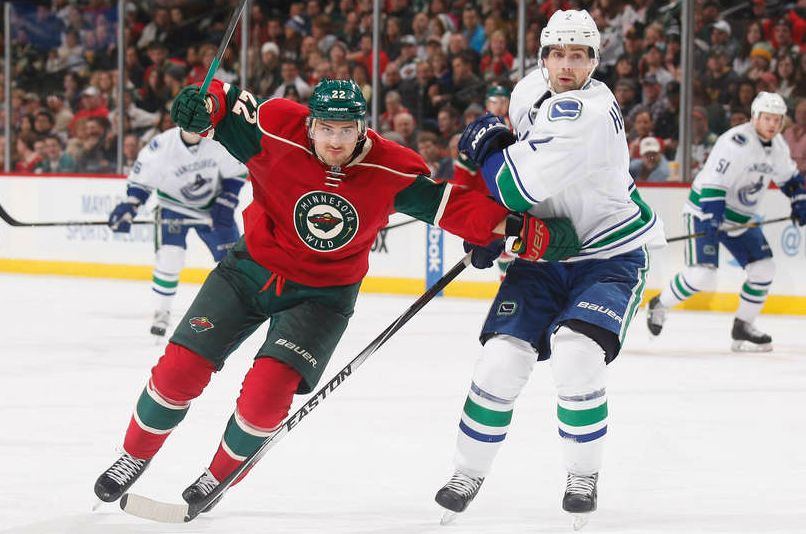 Minnesota’s Nino Niederreiter, seen here fighting off Vancouver’s Dan Hamuis in pursuit of a puck, scored goal No. 16 on the season in the Wild’s 5-3 win over the Canucks on Monday night at Xcel Energy Center. (Photo by Bruce Kluckhohn/NHLI via Getty Images)

Though they may no longer be division rivals, bad blood runs deep, and tonight certainly had that old rivalry feel to it as the Wild topped the Canucks, 5-3, for their sixth win in a row.

It was a hard-hitting, chirp-filled affair and while the Wild walked away with the win — and made up some ground in the playoff picture — the Canucks left a crucial mark as both Ryan Carter and Jason Zucker left the game early due to injury. Wild head coach Mike Yeo noted after the game that both sustained upper-body injuries and will not return to the lineup in the near future.

Playing with only ten forwards, guys stepped up as needed, including Nino Niederreiter who saw a significant up-tick in ice time and made the most of it. Niederreiter gave the Wild a 3-1 lead in the first, firing home a Mikko Koivu centering pass in the slot on his first shift with the jumbled lines.

“When that happens you need guys to step up,” Yeo said. “We had a number of guys step up tonight.”

While Nino stepped up when called upon, Jordan Schroeder made an impression early against his former team. The Canucks were buzzing from the drop of the puck, jumping out to a 4-0 lead in shots on goal. But it was Schroeder who scored first at the 5:05 mark, registering the Wild’s first shot on goal, and swinging momentum heavily in Minnesota’s favor. The goal was the first the former Golden Gopher netted in a Wild sweater and he finished the night plus-2 with three shots on goal and 12:30 TOI.

“It was great,” Schroeder said. “I was really excited, especially to pop one early against them.

“I saw (Charlie Coyle) down the middle and I knew I had a lane to the net. I yelled at him to give me the puck. It was a great play, a great pass, and I was fortunate enough to finish it.”

Overall the win allowed the Wild to keep climbing the ladder in the playoff picture, sitting in ninth in the Western Conference with 58 points, just three behind Calgary in eighth. The Wild get right back at it tomorrow night against the Jets, who currently hold that top wild card spot with 64 points.

“That’s a huge game,” Yeo said. “Now we get to look forward to another huge one tomorrow.”