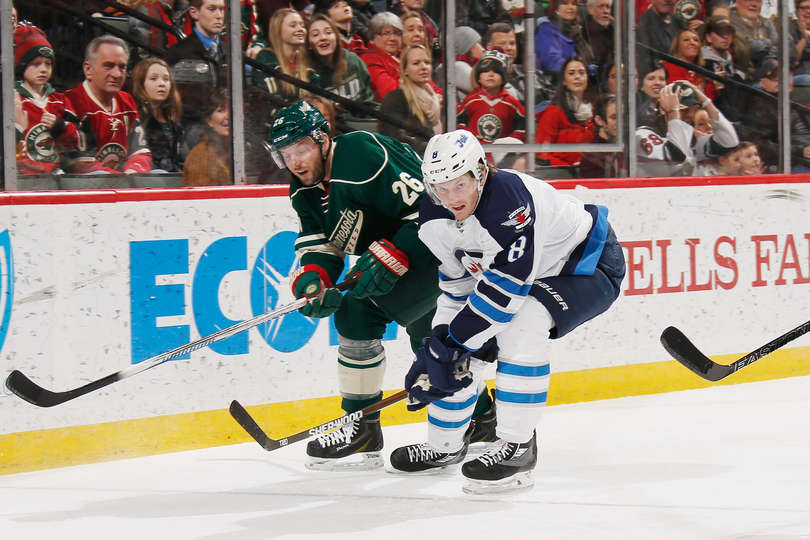 St. Paul – Thomas Vanek offered up this thought to try and find answers for a sputtering offense, after the Wild finished a three-game homestand with its first shutout loss of the season, 1-0 to the Winnipeg Jets (21-21-3) Friday night.

“Sometimes simple is more, especially when we have a few guys who are struggling,” Vanek said, who included himself in that category. “Just get pucks to the net.”

It’s clear the Wild (22-14-3) is a team, with its third consecutive loss, that is struggling to put pucks in the net lately. They’ve scored a total of five goals in the past four games.

“It’s frustrating we’re not scoring,” Zach Parise said. “Offensively, it’s just been not too exciting or not too much fun for us.”

It was the first time the Wild has been shutout this season, leaving Detroit as the only team in the NHL to register at least a goal in every game so far. The Wild’s last shutout came last April, also at the hands of the Jets, in a 2-0 loss in St. Paul.

Friday, former Golden Gopher Blake Wheeler scored the lone tally, just three minutes into the game. He drove the slot and beat Devan Dubnyk on the glove side. That was all that filled the score sheet.

The early deficit aside, the Wild didn’t fold right away, registering 13 shots on goal in the first 20 minutes. But that number dropped to four for the second period and seven shots in the third. They had one last chance to tie it late when Mikko Koivu was hauled down with less than three minutes to play in regulation, for a Wild power play in which it also pulled Dubynk.

It was a game where it felt like it they got one goal, they’d get another, Vanek said.

The Wild also fell to 1-3-0 against the divisional and geographical rival Jets this season.

“It was hanging right there for us,” coach Mike Yeo said. “Just couldn’t grab ahold of it.”

For one thing, giving up the first goal of the game to the opponent is becoming a common trend, Yeo said, which puts his team in “press mode.”

The Wild is 2-4-2 so far this month and has scored just 15 goals during that time. The power play hasn’t cashed in either, with a glaring 0-for-17 stat this month. Not scoring goals with the extra man affects guys, Yeo said.

“It affects confidence, it affects pressure,” he said.

“We have to find a way to create something here. We have to make some adjustments.”

His team has been here before, he added. They’re in a decent place, and “it’s not the end of the world now,” he said. But they need to find their game, their confidence and some goals, pronto. They’re playing playoff hockey, he said.

“I like to think that what we’ve been through in the past will help us get through what’s in front of us,” Yeo said.

With that in mind, the Wild hits the road for a four-game trip, starting Saturday night in Nashville.

“It’s frustrating, but we have to put this one behind us and get ready for tomorrow,” Vanek said.

Jason Pominville played in his 208th consecutive game with the Wild Friday, going back to Oct. 13, 2013. That’s good for third place for most consecutive games played in franchise history, surpassing Andrew Brunette (207).

Ryan Suter tallied six of the Wild’s 24 shots on goal, which ties his second-most in a single game this season. He was on the ice a game-high 27:46.