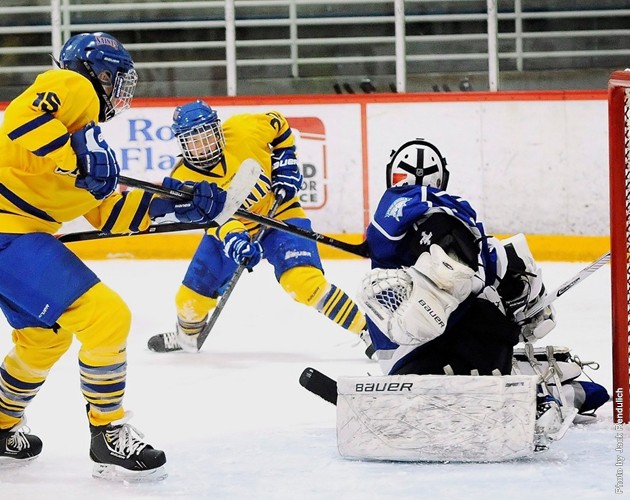 St. Scholastica’s Nina and Isabel Waidacher each recorded eight points in a 10-0 win Friday night over visiting Finlandia.  The eight-point games are believed to tie the records for both the NCHA and the NCAA.

The NCHA record for points by one player in a single game was previously held by UW-Superior’s Mika Sharpe, who accomplished the feat in the inaugeral season of NCHA hockey.  UW-Superior defeated UW-Eau Claire in that contest on December 2, 2000.

Isabel scored three times in the first period to give the Saints a 3-0 lead and bank the pure hat trick.  She added three assists and a goal in the second period, and then scored her fifth goal of the game in the third.

Five goals in one game is good for second on the all-time NCHA list, last accomplished by current St. Norbert forward Henriette Ostergaard in 2010.

Isabel and Nina are two of three Waidacher sisters on the Saints’ roster, all hailing from eastern Switzerland.  Isabel is a freshman, Nina a junior and Monika a senior.

“There’s no question both Isabel and Nina have quite the chemistry with each other,” said St. Scholastica head coach Jackie MacMillan.  “They come from a family where those 3 girls (including sister Monika) all play hockey, the rink in Arosa (Swizterland) is right down the street from their house and the priority for the family has been always been skating and skiing … They’ve grown up together in similar age ranges and they’ve been able to play together quite a bit.”

Isabel and Nina skate on a line with senior Michelle Fischer, whom MacMillan gives much of the credit for the entire line’s success.  Fischer had a goal and three assists in the win.

The line did not take a shift in the third period, and the players only played when their special teams units took the ice.

“(Nina and Isabel) have been working so hard this season and in the preseason,” said MacMillan.  “I think a lot of it has to do with how comfortable they feel with the team and the team chemistry that we have right now.”