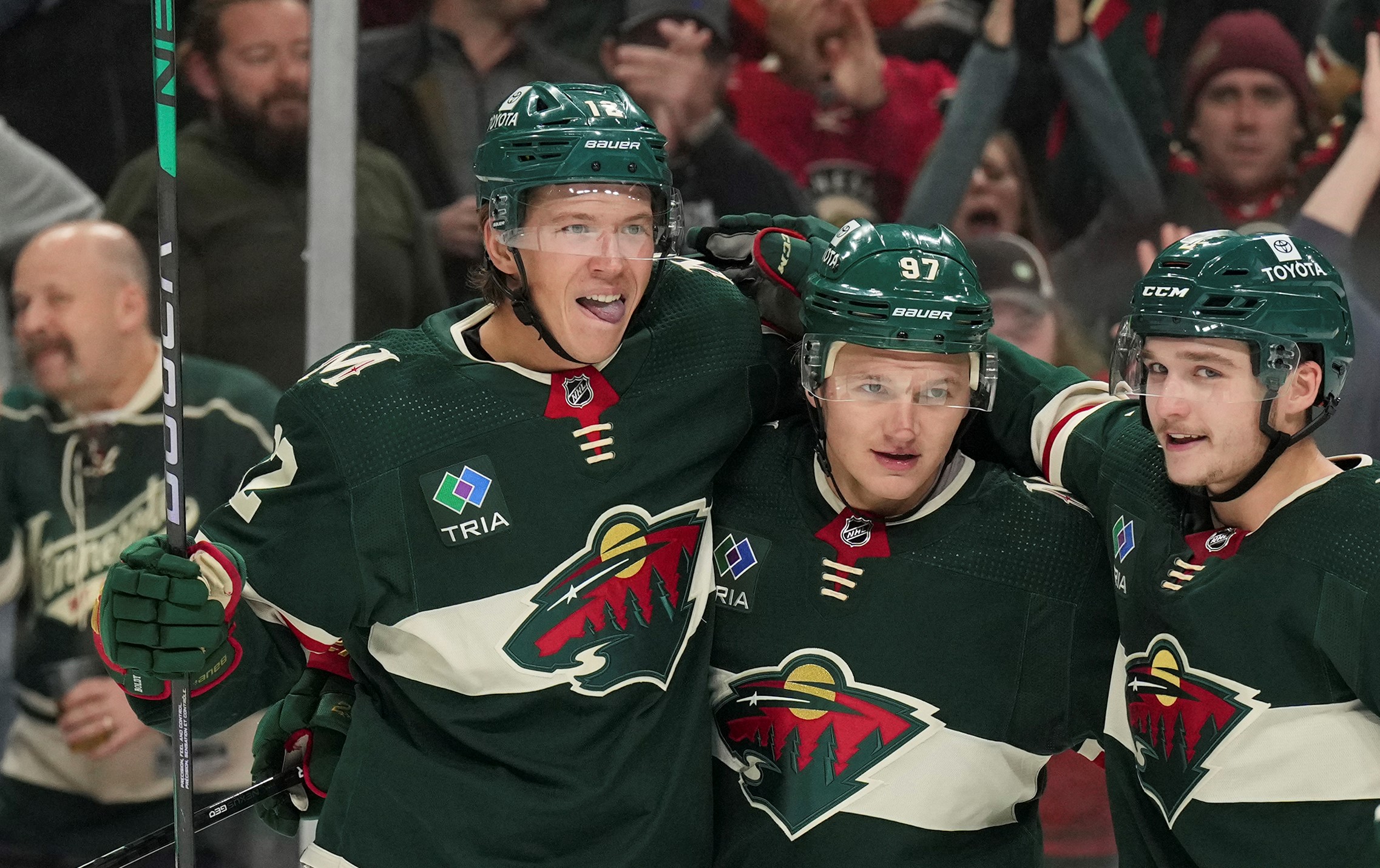 Consistency hasn’t been the Minnesota Wild’s forte so far this season, as indicated by the team’s 9-9-2 record entering Sunday’s game against the Arizona Coyotes as part of the Wild’s seven-game homestand.

The Wild started off the year on a three-game skid while they allowed a touchdown of goals per game. Since then, they’ve won back-to-back games four times. Their November schedule is finished, and the Wild have yet to string together even a three-game winning streak.

Unlike last season when it seemed the entire roster put up career years on their stat sheets, goal production hasn’t come quite as easy for the Wild. Yes, everyone knows Kevin Fiala and his 33 goals and 85 points from last season are gone.

All the more reason for wingers Kirill Kaprizov and Matt Boldy to contribute consistently on offense.

That’s starting to happen, especially lately. Though Wild coach Dean Evason said Sunday that Kaprizov always plays well, even if some nights “he just didn’t have it.”

“But it’s not because of effort, not because of try,” Evason said. “He gives everything that he has every night. He’s going to score his points, but what we like is his grit and his determination.” 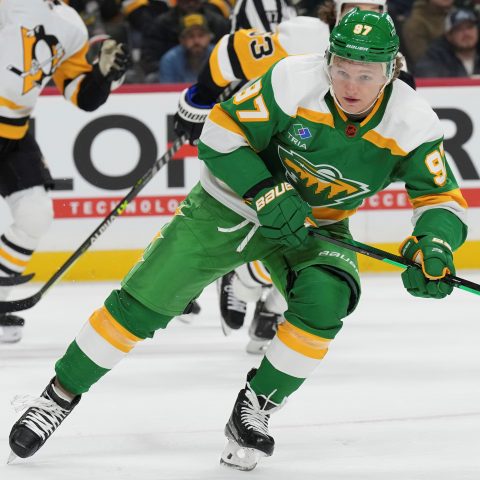 Kaprizov and Boldy each have three-game goal streaks going now. Just prior to that, Kaprizov went five games without a goal (though he finished each game with one assist) while Boldy went through an eight-game goal drought. The Wild went 2-2-1 in the five games when both went scoreless; four of the five contests were one-goal games.

Sunday, albeit against a lowly Coyotes team, Kaprizov connected with Boldy for a no-look pass across the ice that Boldy almost had no choice but to score the goal with a quick shot. That power-play tally gave the Wild a 4-1 lead that they later hung onto for a 4-3 victory.

It was almost a carbon copy of Boldy’s goal – also on the power play, also the final Wild goal of the game – in last Wednesday’s 6-1 victory over Winnipeg. Same pass from Kaprizov, same blast of a shot from Boldy.

“Just be ready for it,” Boldy said. “There’s no pass that guy’s not making through the seam. You kind of see it unfold with just how smart he is, and walking down, he knows you’re there. You’ve got to be ready for it, for sure.”

While the Wild’s line chart has fluctuated this season with injuries and pieces added in and taken out, Boldy has consistently remained at right wing on the second or third line. Kaprizov is a top-line fixture with a few different centers and his chemistry partner Mats Zuccarello on the right wing.

Keeping Boldy and Kaprizov out on the top power-play unit has paid off though. Three of Boldy’s goals are on the power play, while Kaprizov has scored 7 power-play goals. Both players have about half of their points with the man advantage for a Wild power play that’s about middle of the pack in the NHL in terms of production (much better at home than on the road).

On Sunday, Kaprizov scored the first goal of the game in the first period, waiting at the goalmouth to finish off a bang-bang play as Joel Eriksson Ek fed him the puck from below the goal line.

Kaprizov added another assist for a three-point game against the Coyotes to extend his point streak to a career-long nine games with 5 goals and 9 assists in that span. He assisted on Sam Steel’s goal for a 2-0 lead Sunday, giving Kaprizov a streak of assists in eight consecutive games. It matches the franchise record for an assist streak, tied with Jim Dowd from Feb. 27, 2002 to March 17, 2002.

“Just play my game,” Kaprizov said, through an interpreter. “Come to the rink prepared… just play my game and let the rest of it take care of itself.”

Kaprizov leads the Wild in scoring, as it should be, with 13 goals and 27 points. He has 19 points in his past 15 games.

“He’s unbelievable,” said Marcus Foligno. “Every night he’s our best player for a reason. When he’s going, it’s exciting, because if we get secondary scoring along with his scoring, then we’re in for a good night.”

Boldy is definitely some of that secondary scoring. 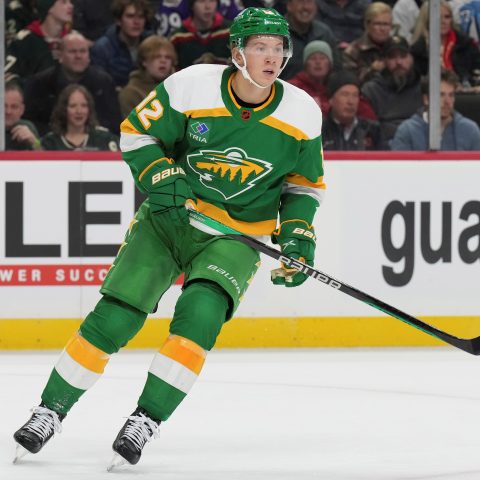 Ever since Boldy, a 2019 first-round pick, scored a goal in his NHL debut Jan. 6, 2022 in Boston, there’s been no doubt he belongs. He scored 15 goals and 39 points in 47 games last season. He tallied an assist in Anaheim, his 60th career game, on Nov. 9 this season, making him the second-fastest Wild player in team history to reach 50 career points, according to NHL Stats. Who was the fastest? Kaprizov, obviously, hitting the mark in 54 games.

In early November, Boldy, 21, went through an eight-game stretch recording only one assist. That stretch coincided with back-to-back shutout losses to Seattle and Los Angeles for the Wild. Boldy said he’s tried to stick to his game and, mentally, not let a downturn affect him too much.

Evason’s noticed Boldy has simplified his game, getting away from trying to make too many passes or execute a perfect play.

“Going straight forward,” Evason said. “I think that that’s something that he’s concentrated on, not only going forward with the puck but with his feet. He’s skated well. He’s getting to the net, and he’s shooting the puck.”

Kaprizov and Boldy top the Wild’s goal chart with 13 and 9 goals each. Boldy, for one, has made it clear multiple times that he cares about the team outcome of a game more than any individual numbers. He scored a pair of goals in the season-opening, 7-3 loss to the New York Rangers and said he’d “give (the goals) back in a heartbeat,” since the team lost.

He offered a similar sentiment on Sunday.

“It’s obviously nice to score,” Boldy said. “I think there’s still parts of my game I want to be better with. Possessing pucks and making more plays. But I think obviously you win the game, that’s the important part. Scoring goals is nice, but it’s nothing too crazy. I’d take that win over a goal any day.”