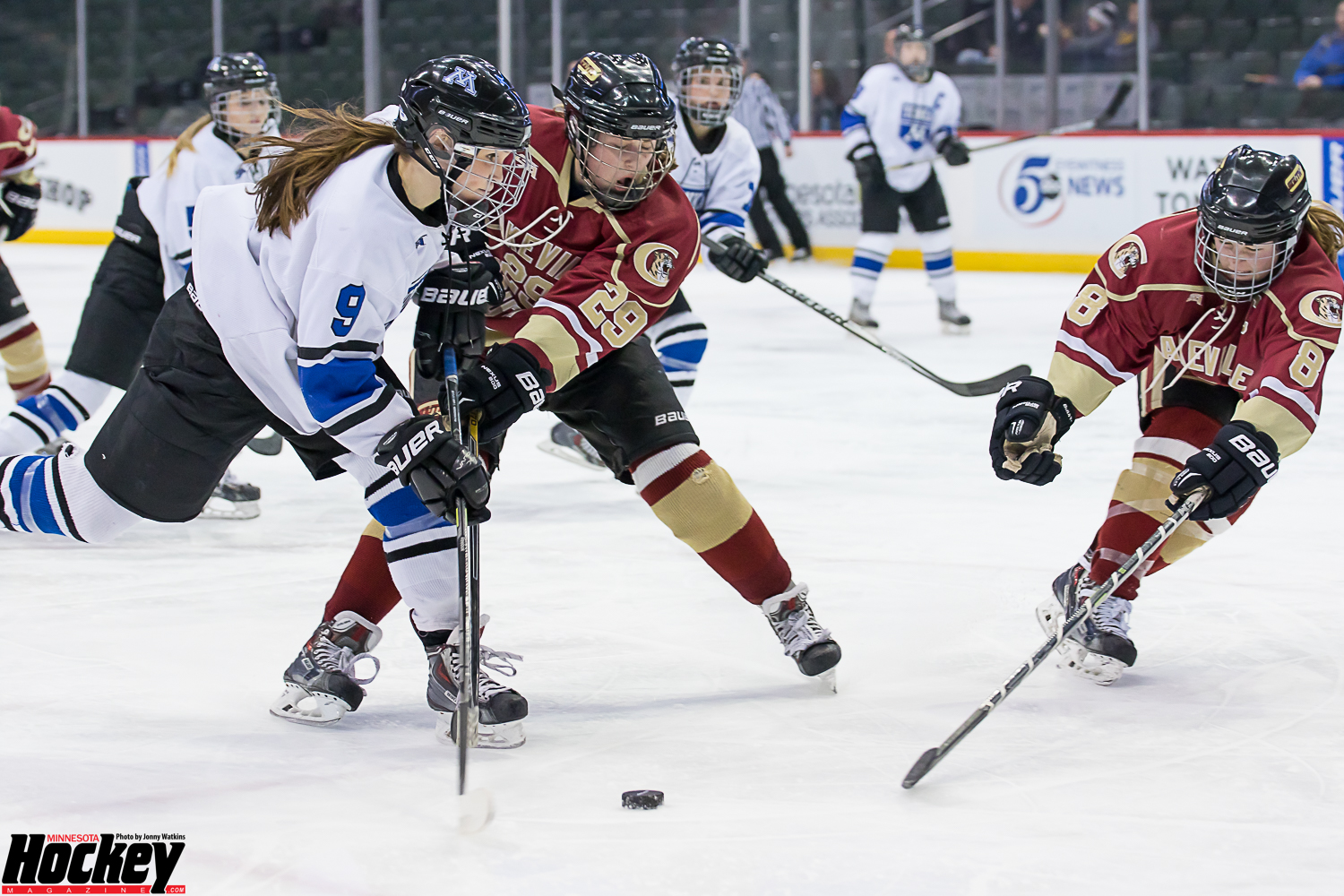 Minnetonka’s Annelise Rice (9) fights to get a shot off as Lakeville South’s Kyah Orr (29) and Kelsey Olsen (8) defend in the Skippers’ 5-1 Class 2A semifinal win over the Cougars on Friday night at Xcel Energy Center. (MHM Photo / Jonathan Watkins)

SAINT PAUL – Lakeville South appeared destined to head to the first intermission of Friday night’s Class 2A girls’ state semifinal matchup with top-ranked Minnetonka trailing by just a goal. But Skippers’ star Kippin Keller quickly reminded the Cougars — along with everyone else at Xcel Energy Center — that periods are 17 minutes long, not merely 16:57.

Keller drove to the net from the left corner on her backhand before tucking the puck between the legs of Lakeville South goalie Chloe Crosby with just 2.1 ticks left on the first-period clock. Adding insult to injury, Keller scored again 1:08 into the second to send the Skippers on their way to a 5-1 win and a return to the title game for the 2013 state champions.

While acknowledging she had no idea how much time was left leading up to her first goal, Keller is aware of the impact her pair of goals 71 seconds apart had on her team.

“I definitely think it got us some more confidence and some more momentum going into the period and ending the period,” Keller said.

Minnetonka goaltender Tatyana Delaittre took it from there, only allowing a late Morgan Morse goal — her fourth of the tournament — to finish with 27 saves.

“Lakeville played an awesome game and they’re a tough team to play against,” Johnson said. “We were just fortunate to get some goals and some bounces and Kippin was a big part of that Taty did a great job of shutting the door.”

A bit of a fluky goal got Minnetonka on the board first just short of the 10 minute mark of the opening period. Camille Von Steinbergs’ shot from the left point was stopped by Crosby but Lakeville South’s Kelsey Olsen’s clearing attempt rebounded off Skippers’ forward Emma Bigham’s skate and into the Cougar net.

“It was just one of those nights where the hockey gods were not on our side,” Lakeville South coach Natalie Darwitz said. “It’s too bad that, the stage we were on, it happened to be tonight. I think if we played them again it’s a different story.”

Awaiting the Skippers is defending state champion Hill-Murray, 2-1 winners over Edina earlier in the evening. The matchup of the past two state title holders promises to be a memorable one.

“Hill-Murray’s deep and they’re talented and we respect them a lot,” Johnson said. “I think it’s going to be a close game, it’s going to come down to who’s making the plays.”