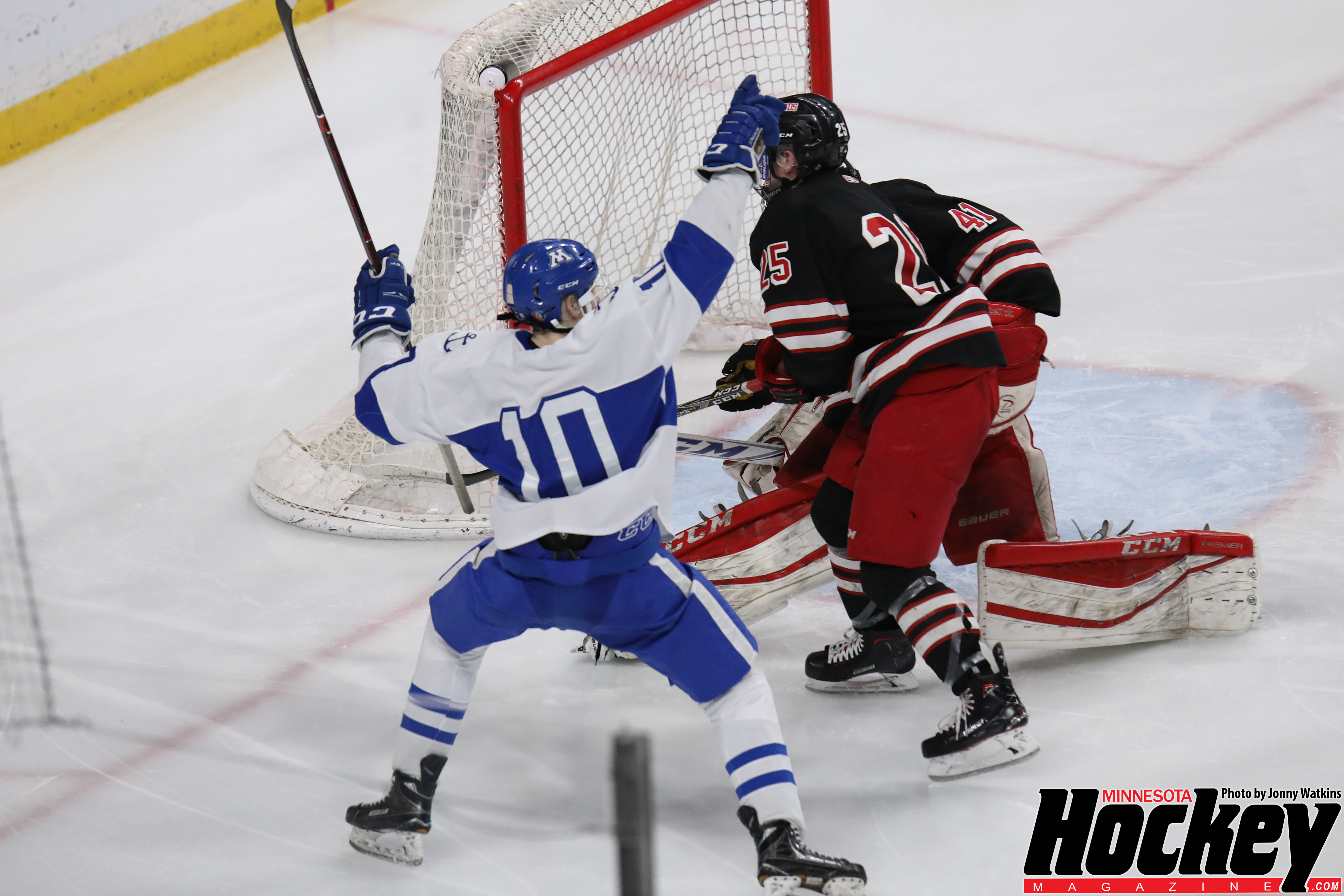 After a historic season for the Minnetonka Skippers, the team reached its ultimate goal of capturing their first state championship with a 5-2 win over the Duluth East Greyhounds in Class AA.

A fast start and a fortunate bounce helped the Skippers hold off the Greyhounds despite Duluth East outshooting Minnetonka 23-14 over the final two periods.

After finishing as runner ups in 2010, third place in 1990 and a consolation championship in 2006, the Minnetonka Skippers finally have their long awaited state championship. Skippers coach Sean Goldsworthy – who is in his first year as head coach – was a member of the 1990 team that finished third, and the start of tonight’s game gave the coach an eerie feeling.

“I played in that third (place), semi-final game in game and lost it,” Goldsworthy said. “We fell behind early, and it felt pretty similar, we were down two zip right away to Roseau. But these guys have conviction. They really believe each in each other, we came back and I really felt we were going to get back in that game and take over.”

Which is why it meant so much for the coach to win the title in his first year.

“To come home and win a title in your first year, I’m pretty realistic I don’t know if that’s going to happen every year.”

Goldsworthy also took time to thank his seniors and reminded everyone else in the room that he hopes this group can stick together and build something special for years to come.

“So maybe follow my lead, we got some good kids. I’m really happy for my seniors. They mean a lot. These kids are special and they’ve blessed me.”

After both teams felt each other out, it was Duluth East who netted the game’s first goal at the 7:11 mark when junior Ricky Lyle took a beautiful centering pass from senior Austin Jouppi and Lyle found the back of the net. The Greyhounds lead wouldn’t last long, though, as they received a tripping penalty and were forced to go on the penalty kill.

Initially, goaltender Parker Kleive made a barrage of saves but Jouppi, who had an opportunity to clear the puck down the length of the ice, elected to just throw it behind his own end line giving Minnetonka more time to hold the zone. Seconds later, Bobby Brink tied things up on a rocket shot from the slot which beating Kleive .

The Skippers continued to buzz after their power play and just over 90 seconds later, senior Matt Koethe streaked in untouched, threading a shot on the short side of Kleive giving Minnetonka the 2-1 heading into the first intermission. Koethe’s goal turned it out to be the game-winner. 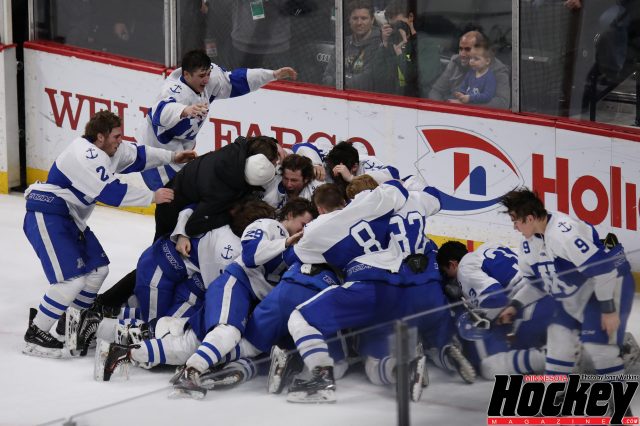 Minnetonka celebrates on the ice after capturing their first championship in school history. (MHM / Jonny Watkins)

Skippers senior Joe Molenaar came into the tournament pacing his team with 29 goals but only having eight assists in 28 regular season games. However, Molenaar took more of a distributing role in this year’s tournament. He assisted on two of the first three goals Minnetonka scored in the championship game and had two other helpers in the games leading up to matchup with Duluth East. Yet, when you have a natural goal scorer like Molenaar, he’s eventually going to cash in. Even when the puck happens to go off his skate and into the back of the net giving the Skippers a 4-2 lead with 14 minutes to play. Molenaar said those are the kinds of bounces that team has earned all season.

“[Grant] Docter made a nice look down low and it happened to go right off my foot,” Molenaar said. “I think with this group, stuff like that seems to happens to us. We are always working, we’re the hardest work of guys I’ve ever been around. I think at the end of the day that’s reason all these bounces go are way because good things happen to teams where everyone is one the same page and rolling together.

Molenaar was also rewarded as the 2018 Herb Brooks Award for representing the values, characteristics, and traits Brooks embodied to keep his legacy alive.

Minnetonka was the No. 1 seed in this year’s tournament going 24-2-2, meanwhile Duluth East was seeded third at 23-2-3. The parity was insanely close and, ultimately, there has to be a winner and there has to be a loser –  which is why Greyhounds coach Mike Randolph gave credit to the Skippers.

“At the end of the day, we lost to a heck of a hockey team,” Randolph said. “They’re a great team, they’re a great champion and I’m happy for Goldy. He’s done a heck of a job there and I’ve got a lot of respect for him.”