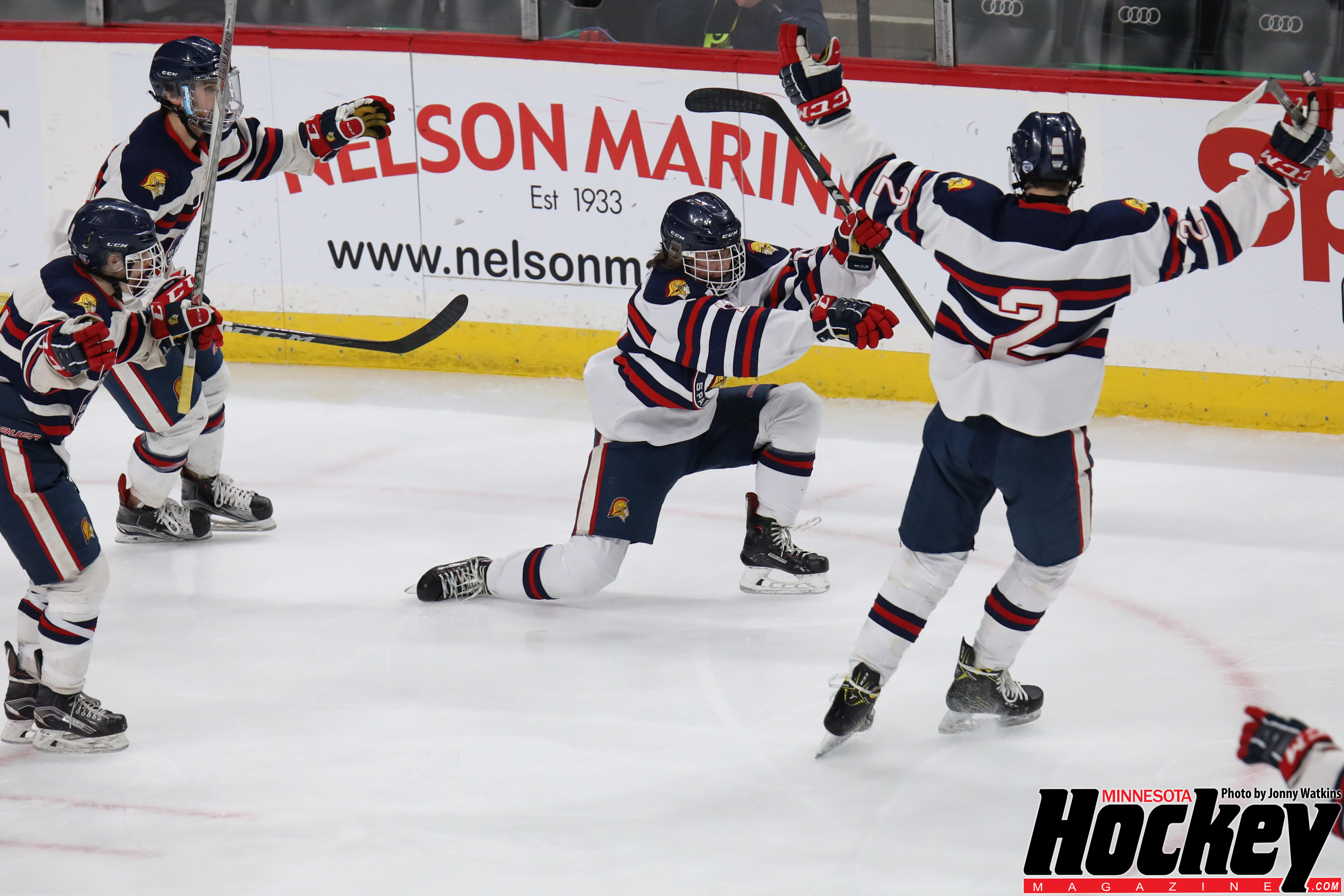 Orono’s Landon Wittenberg celebrates his third-period goal which turned out to be the game winner in the Spartans’ 2-1 Class A state championship game win over Alexandria. (MHM Photo / Jonny Watkins) 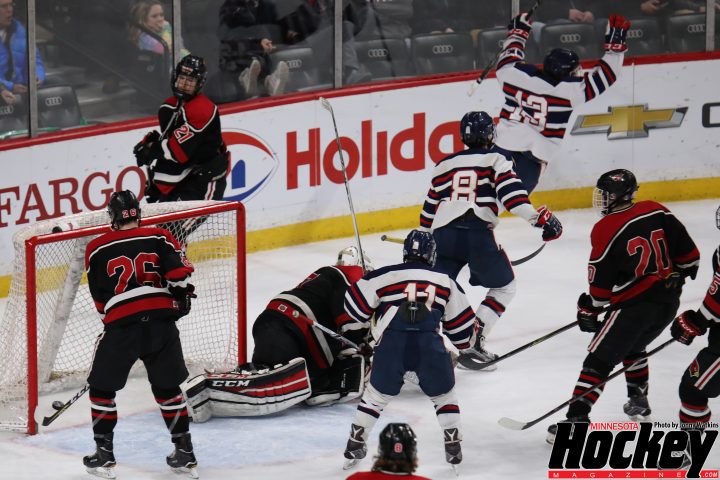 Wittenberg (No. 13) skates away with arms raised after his game winner. (MHM Photo / Jonny Watkins)

Orono junior forward Landon Wittenberg, who wears jersey No. 13, defied his perceived unlucky number to score the biggest goal of his life and his community’s hockey history. Wittenberg’s first goal of the tournament and 11th of the season with 10:43 to play stood up as the game winner to give Orono its first Class A state championship in eight tournament appearances.

A shot from the left point by defenseman Jack Kubitz missed wide left but the carom off the end wall went right to Wittenberg near the right post. Alexandria goaltender Jackson Boline, who lunged at Kubitz’ shot, had no time to recover before Wittenberg banged home the game winner with 10:43 remaining in regulation.

“I was so surprised that the puck just popped right out on my stick and it was just like, no way I can miss this, I just hammered it as hard as I could and left no doubt,” Wittenberg said. “I’d say the boards here are definitely more lively than any other rink we’ve played in, so shooting it wide is most of the time a good play.”

Wittenberg said he wore number nine throughout his youth career but it was taken when he arrived at Orono as a freshman. He took one of the only numbers left and is proud to put it on when he gets the opportunity.

“Everyone knows about Jack Jablonski and I think it’s an honor to wear that number. Every time you put that jersey on you should go out there and kind of think of him and you should work your butt off because he did and he’s done so much for this game.” 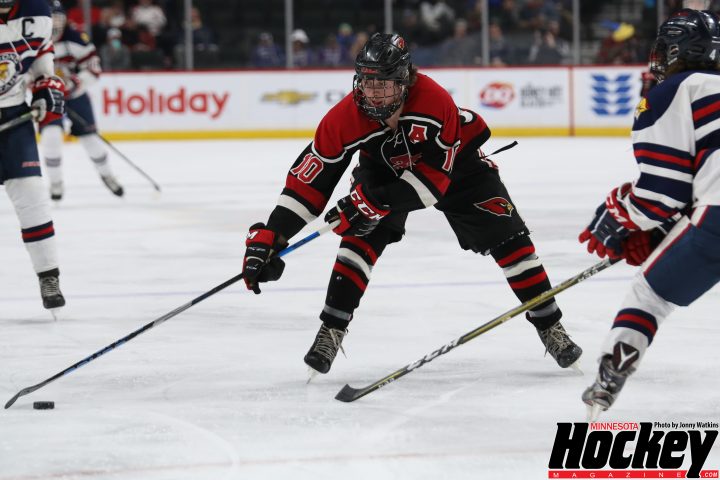 How we got there

Thomas Walker got the Spartans got on the board first at 7:18 of the opening period on a nifty backhand feed from Lucas Jorgenson. Jorgenson carried the puck from the corner to Boline’s left and found  Walker near the right post who buried it for his fourth of the tournament and 22nd of the season.

The Cardinals drew even at the 15:07 mark of the first period when Ben Doherty’s clean faceoff win found Jack Westlund whose quick wrister from the top of the left circle beat Babekuhl high for his second of the tournament and 16th of the season.

Walker took responsibility for the goal.

“He was my guy, I was hustling out there and he shot it right through my legs and I think it kind of screened Evan.”

Alexandria wins special teams battle but not the war

The Cardinals played with fire in the second period but managed to escape getting burned, potentially badly. Alexandria was called for four second-period penalties, two of which overlapped resulting in a 20 second 5-on-3 for Orono near the 16 minute mark.

While the Cardinals managed to hold Orono to just three shots in its 7:05 of power-play time, playing half of the period shorthanded made it tough for Alexandria to generate any offense as the Spartans outshot the Cardinals 10-1 in the second.

“It’s just part of the game,” Alexandria coach Ian Resch said. “When you’ve got to kill, it taxes your top D, your top forwards and your goalie’s stressed a little bit.”

On the other hand, Alexandria’s penalty killers were outstanding in holding the Spartans to 0-for-5 with the man advantage. Orono was fortunate that its failure to capitalize on those man advantages did not come back to haunt them.

“The funny thing is we went and practiced on Thursday and worked on the power play for about a half hour and they were whipping it around and it was great,” Scholz said. “On the big stage, we didn’t quite do it today but they’re resilient, they work hard and they don’t get rattled to often.”

Orono’s seniors, including goaltender Evan Babekuhl who finished with 15 saves, won a Minnesota State Bantam A state championship together in 2015. Three years later, the Spartans are celebrating once again, time as Class A state champions.

“I think that just made the senior group even more hungry,” Walker said. “We tasted a little piece of cake, now we want the whole thing so that was kind of our mindset throughout the whole year.” 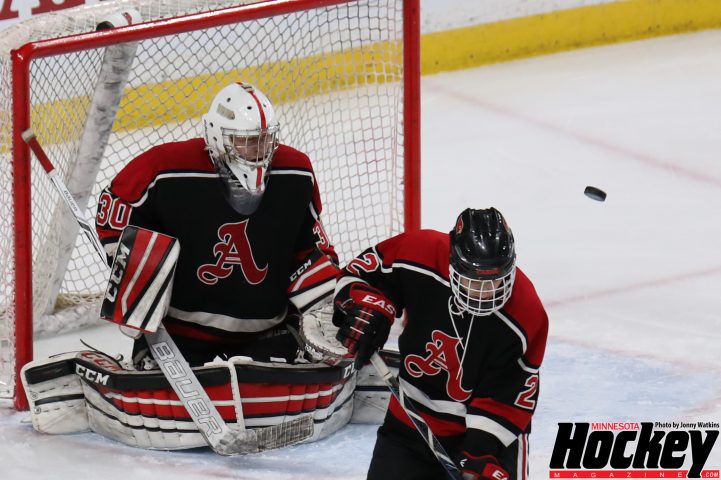 An obviously devastated Boline, who finished with 25 saves, was flooded with teammates consoling him in the crease after the final buzzer. Westlund was one of them and said Boline was the reason the Cardinals were even in the game to the end.

“He had nothing to be ashamed of, he played unbelievable all year, especially in the playoffs,” Westlund said. “Without him we wouldn’t have been in this game tonight.”

Boline, who was named the recipient of the Herb Brooks Award after the game, clearly appreciated the support.

From underdogs to Cinderella story

A the third seed in the Section 6A playoffs, Alexandria scored upsets against two higher-seeded teams to reach the state tournament for the first time since 2011.The Cardinals shut out second-seeded Sartell-St. Stephen in the semifinals and shocked No. 1 St. Cloud Cathedral in the championship game, 3-2.

Alexandria followed that up by beating Thief River Falls for its first-ever quarterfinal win before blowing out top-seeded Hermantown 6-1 in the semifinals.

Resch said he couldn’t be more proud of his underdog Cardinals.

“It’s going to take a couple days but the guys will be able to reflect and realize what they accomplished,” Resch said. “Right now, they’re in the middle of it, it stings, it hurts but they’ll be talking about this and they’ll remember this for the rest of their lives.”