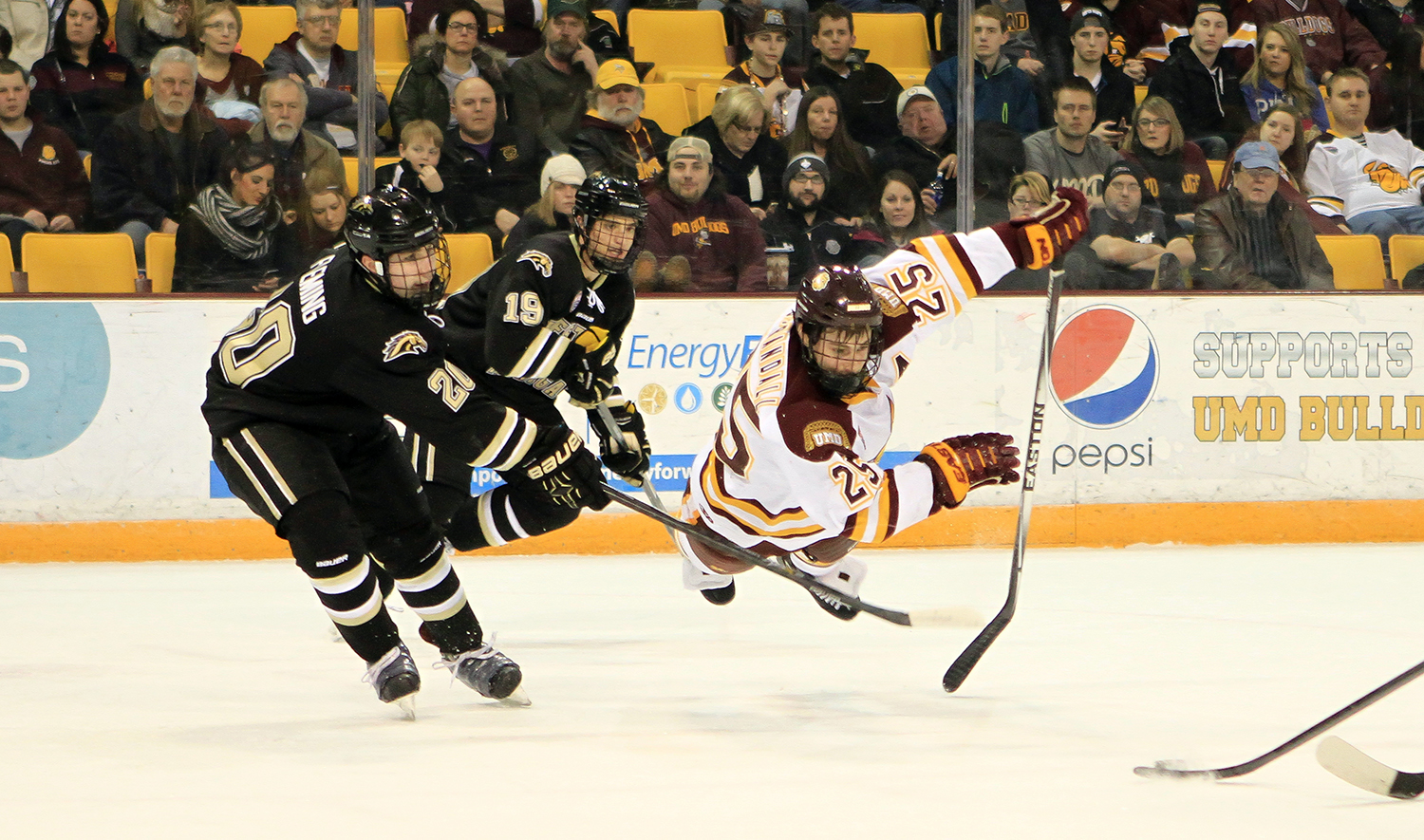 In front of 6,873 fans at Amsoil Arena, UMD’s special teams struggles were exacerbated by a combined eleven penalties.

Without their top scorer, Dominic Toninato, who was suspended for a knee-on-knee hit in Friday’s 2-2 draw, the Bulldogs struggled to get pucks to the net on the power play, tallying only four shots on four opportunities.

“I thought there was some good in both nights, but not enough good for 60 minutes,” Justin Crandall said, assistant captain and Lakeville, MN native.

The senior earned an assist on Tony Cameransi’s gritty third period goal that tied the game at two, but Western Michigan quickly responded with Colton Hartgrove’s second goal of the game, which also served as the game winner.

“We need some more of that,” Crandall said. “Guys [going] to the net scoring some ugly ones.”

In the back and forth contest, physical play kept both teams from getting quality scoring chances.

“You’re not going to get great chances against this team, that’s just how they play,” head coach Scott Sandelin said. “But when you get them, you gotta bear down and we didn’t do that. You have to get your nose in there, and you have to get into the tough areas. We gotta get back to that.”

The Broncos size and physicality kept UMD’s deep lineup from sustaining offensive pressure for much of the game. And when they faltered, goaltender Lukas Hafner stepped up, stopping 25 of 27 shots.

“I thought their goalie was good tonight,” Sandelin said. “[With] this team you have to earn it, and get goals like [Cameranesi] did, where it barely goes over the goal line. We knew it was going to be difficult, they make it difficult on every team.”

Across the ice, UMD freshman goaltender Kazamir Kaskisuo stopped 23 shots, including 14 in the opening period — nine of which came on the power play.

The Bulldogs struggled to execute offensively against Western Michigan, failing to convert on the few opportunities they were given.

“That’s been our biggest downfall the last couple games, we’re getting quality chances but we’re not scoring,” said Crandall.

Helped by the newly formed NCHC, and several similarly physical games, there appears to be a blooming rivalry between the two teams.

“Every weekend with these guys is [a] battle,” said Crandall. “It kind of seems like we take it to them at their rink, and they kind of give it to us at our place, so we’re excited to get a little crack at them at the end of the year.”

Despite the conference loss, the Bulldogs maintain second place in the NCHC and travel to St. Paul, MN next week to face Bemidji State in the North Star College Cup at the Excel Energy Center.

Jimmy Gilligan is a junior studying English at the University of Minnesota Duluth, he enjoys reading and watching the Bulldogs and Minnesota Wild.