Pohl’s position themselves to drive Cretin-Derham Hall girls’ program to the top. 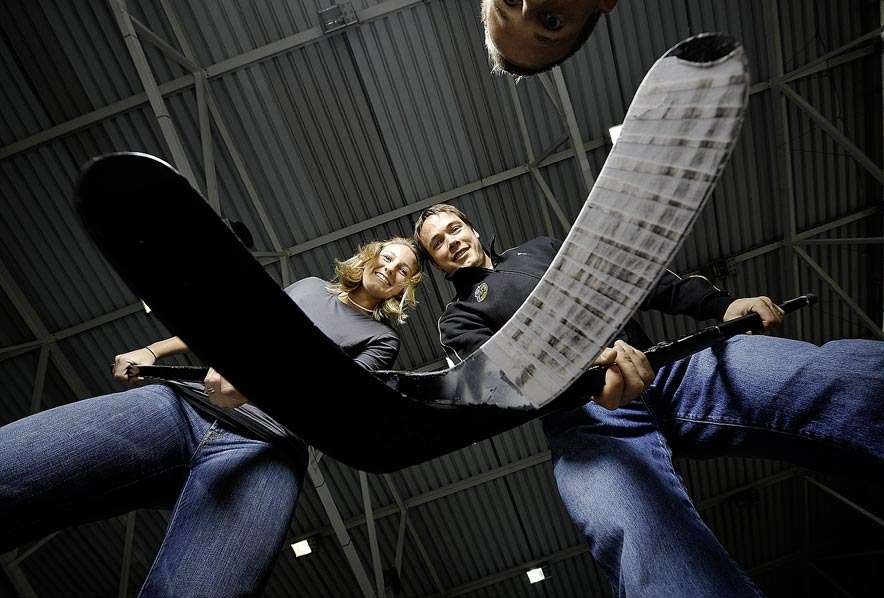 Pohl’s position themselves to drive Cretin-Derham Hall girls’ program to the top.

Few hockey programs – boys or girls – in the state of Minnesota have coaches with the instant name recognition Cretin-Derham Hall’s girls’ program has. During the last five years this staff has slowly built the Raiders’ program back near the level of the state tournament teams CDH had in the 2000’s.

It’s difficult to imagine there are too many hockey fans in the state of Minnesota who don’t immediately associate hockey excellence with the names John Pohl and Krissy (Wendell) Pohl. What the husband and wife team hope you associate them with soon is the hockey excellence of their improving program.

Head coach John Pohl grew up in Red Wing. His father was the head coach of the Wingers’ boys’ hockey program, but John never played for his dad. By the time John was old enough, his father had taken increased roles in the administrative side of the high school and had stepped down as head coach but his dad was a big influence on him nonetheless.

“He would bring us to practice once in a while or we would go to summer camps with him. I just grew up around hockey,” Pohl said. “That was my biggest goal through life to play for the Wingers.”

Obviously his career didn’t end in high school. His many accomplishments include winning a state championship as a junior, Mr. Hockey as a senior, a national championship with the Minnesota Gophers and a professional career that included three years with the National Hockey League’s Toronto Maple Leafs. During his playing career, Pohl spent a lot of time contemplating what he wanted to do once his playing career ended.

“There were a lot of times while I was playing professionally that I would sit around all day and think about what I wanted to do,” Pohl said. “I came to the conclusion that I wanted to be happy. I always looked at my dad and his friends and they always seemed relatively happy with their jobs as teachers. It is such a great lifestyle to have and you can really impact people’s lives.”

Pohl used experiences from the numerous coaches he has played for as the basis for his coaching style and philosophy.

“In terms of X’s and O’s and drills, one of my professional coaches was one of the best I ever had. In terms of staying calm and even keeled I would consider that my college coach and in terms of having fun, keeping everything in prospective and being there for the kids comes from my high school coach (former Red Wing coach George Nemanich).”

With no prior coaching experience – outside of working some camps – Pohl jumped into his first official coaching position as a head coach with the Raiders.

“Being a teacher really helped,” Pohl said. “A high school kid has a million different things going on in their life. They have academics, their social life, athletics; they have so much going on. One of our girls might be down because she bombed a physics test or something. Teaching has really helped with that. There have been some little technical coaching things here and there that I had to figure out: when to pull the goalie, going to two lines, things like that.”

Moving from boy’s to girls’ hockey might have been even tougher for Pohl if it wasn’t for one of his assistant coaches – his wife, former Park Center High School, University of Minnesota and Olympic star, Krissy.

“It is great having a female on staff. Being a male there are some things that girls don’t want to talk to me about. It has been great having her (Krissy Pohl) not only all the expertise she brings in hockey, but she has been in their shoes and she understands some of things they are going through.”

“We have three young daughters so it is tough for Krissy to get to all the practices, but she works with the power play and the forwards. She is a great benefit to our program just having someone the girls can relate to on top of the fact that she can answer any hockey question they might have.”

Being a husband and wife team could lead to unintended consequences, but the Pohl’s have had little or no issues with bringing hockey home.

“I think both of us have it in prospective. It is a way for us to help kids, give back and represent the school. It has been great.”

The change to girls’ hockey for Pohl also included a change in how he approached teaching the game.

Pohl was coming into a program that had success in the past, but had fallen on hard times. Since Pohl and his staff took over the program’s win total has improved nearly every year and last year had the most wins since the 2006-2007 season. Pohl’s priority when he first took over had to do with commitment to the sport.

“To be an elite hockey player you pretty much have to play year round now. I know a lot of people don’t want to hear that and I don’t even like saying it, but we went from one or two girls that would play a lot of hockey to now we have eight to ten that play hockey year round. It is no surprise that we have gotten better.”

All coaches in all sports need to find that balance with kids according to Pohl.

When he gets the players on the ice everything they do revolves around one thing.

“We try to do everything fast – up tempo,” Pohl said. “We don’t spend a lot of time in X’s and O’s. We believe we need to play fast and aggressive.”

One of the challenges CDH and other private schools have is the lack of a feeder program.

“We have a summer camp we open up to any middle school kids who want to play. From a competitive standpoint, we just hope that good players want to come to our school and want to play for us.”

That lack of a predictable pipeline makes putting the program together each year a different type of challenge, but with the assistant coaches Pohl has in place, they have been able to adjust and excel.

In order to take the next step toward becoming a state tournament team again Pohl feels they are on the right path and simply need to keep building the program making it as attractive to the athletes as they can.

On the ice the Raiders should have an attractive team in 2014-15.

“We have an All-State Honorable mention player coming back named Paige Voight,” Pohl said. “She has committed to Merrimack College and so has Anna Boeckers. Our goalie – Emma May – is going to Minnesota and we have a girl who is going to be a sophomore named Jordan Hansen. She is one of the best 15-year-olds in the state.”

If the Raiders’ program can continue to improve behind the core of next seasons’ team and beyond, the Pohl name will be known not only for playing hockey, but for building a Minnesota hockey power.