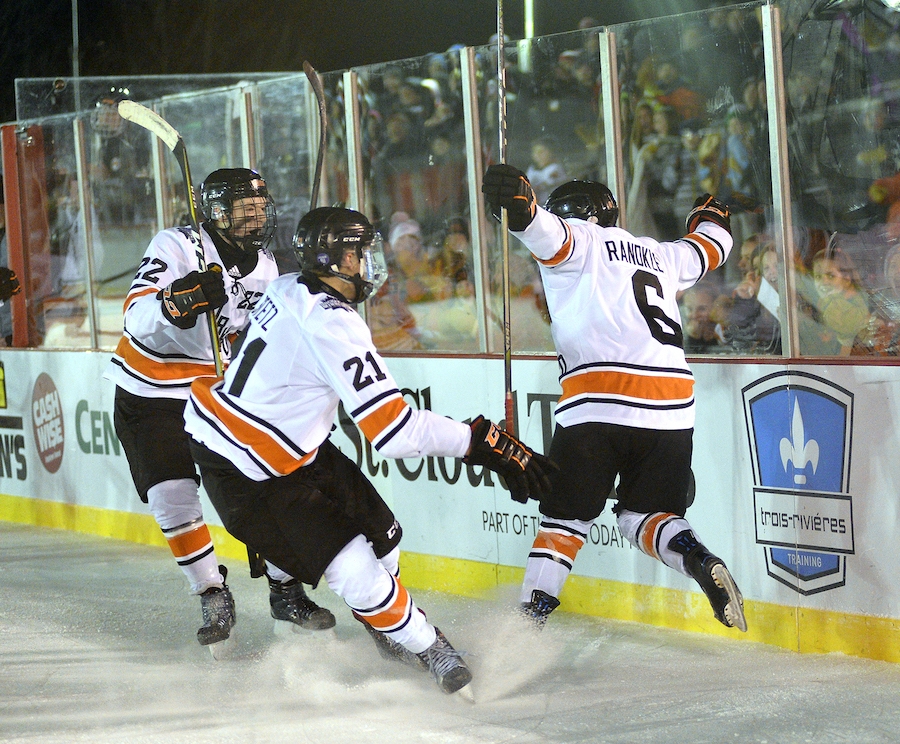 St. Cloud — The Moorhead Spuds and Centennial Cougars capped off an ideal day of outdoor hockey in St. Cloud by treating all who remained to some free hockey on Saturday night in the Hockey Day Minnesota finale at Lake George.

Carter Randklev’s goal with 26 seconds left in overtime lifted Moorhead to a 3-2 win over Centennial after the No. 8 Cougars rallied from an early two-goal deficit to tie the Spuds in a game too good to be decided in regulation.

“I knew the overtime was getting down to the end of it and I just kind of sat out front hoping that the puck would hopefully get thrown out to me and it did,” said Randklev, who notched his 18th goal of the season. “From there I have no choice but to score because, for my teammates and my community, that’s what I try to do for them.”

“He had opportunities, he had chances throughout the game and it was just a deflection or a tip off,” Moorhead coach Jon Ammerman said of Randklev. “For a guy to have a puck like that in that moment and capitalize, what a great experience and, as a coach, you can’t really ask for anything better for a good kid.”

Moorhead jumped out to a 2-0 lead before the game was seven minutes old and carried that cushion into the second period. Cole O’Connell’s goal at 4:08 opened the scoring with 10th of the season while Kyler Kleven popped in a rebound of a Jack Stetz shot for his third of the year at the 10:42 mark. 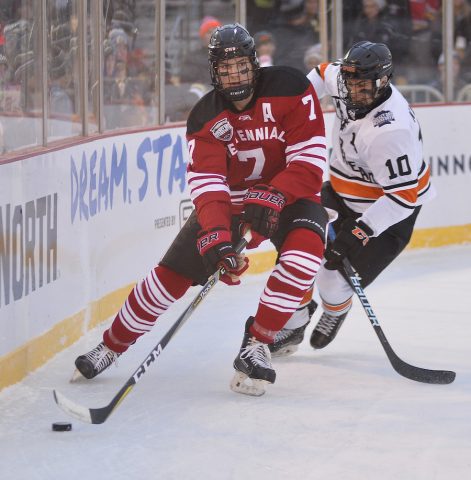 The Cougars bounced back in the second with a pair of special teams tallies to knot the score at 2-2 after two periods. With Centennial shorthanded, William Francis scored his sixth of the year from a sharp angle, cutting the Spuds’ lead in half just 2:42 into the middle stanza.

“That’s a very good team that we played against, they did an outstanding job of making it tough on us especially in that middle period,” Ammerman said. “They took advantage of their opportunities.”

Just over five minutes later, Hayden Brickner scored his ninth of the season on a power play off a feed from Lucas McGregor to draw Centennial even entering what would turn out to be a scoreless third period.

“Our guys played so hard, maybe the hardest they’ve played all season long in all three zones,” Centennial coach Ritch Menne said. “It was just a terrific, terrific atmosphere and we’re unbelievably proud of all of them.”