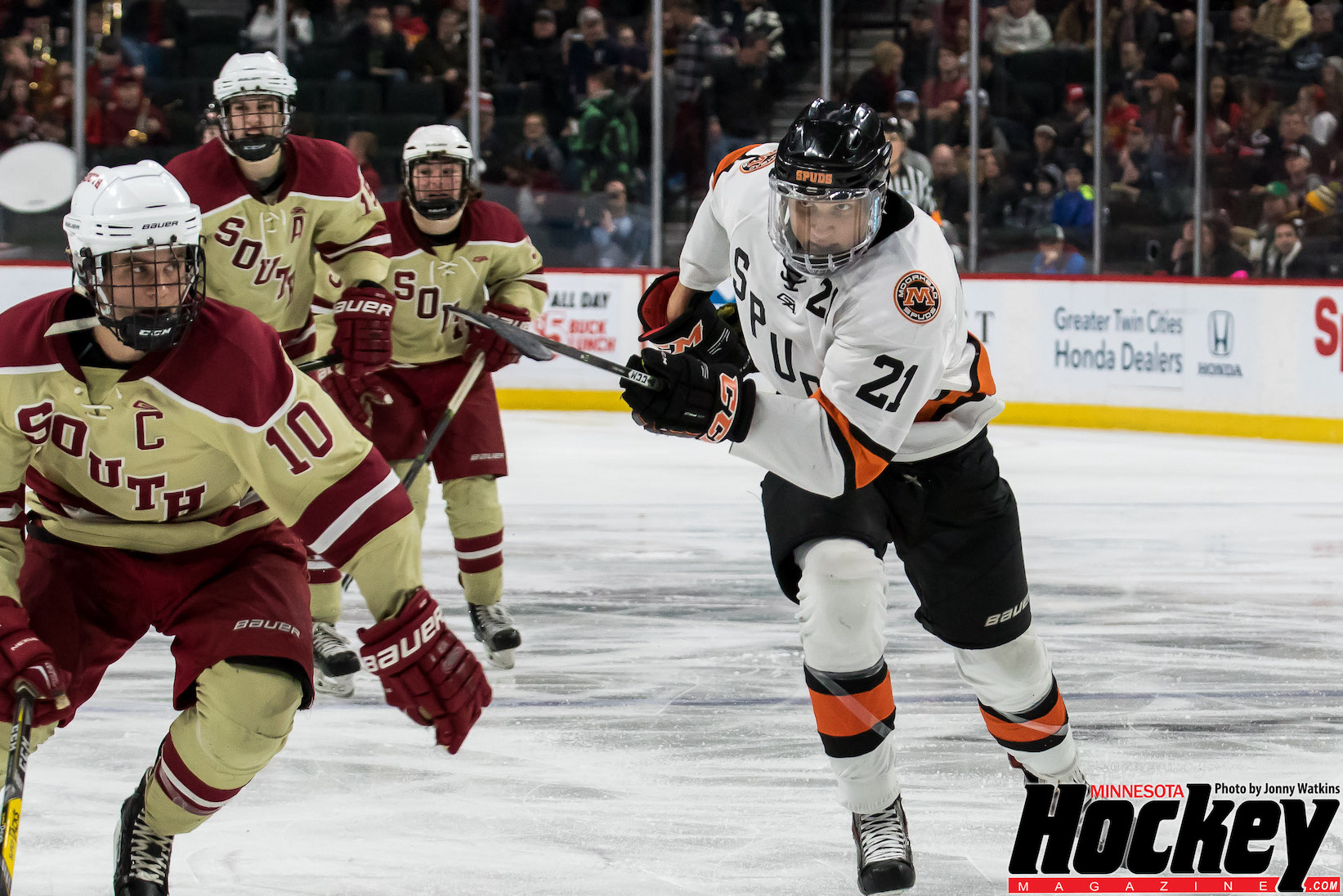 Jack Stetz and the Moorhead Spuds are heading back to the Class 2A state championship game for the first time since 2009. (MHM Photo / Jonny Watkins)

This is not unfamiliar territory for the Moorhead hockey program, but it is territory untraveled by this group of Spuds.

The school has been to seven championship games, represented by a good chunk of the student body and half the town (unofficial number), most clad in orange only to make the trip back up I-94 with yet another runner-up trophy.

But the guys playing Saturday night hardly remember any of that.

“Obviously, they know the history but these are new kids,” said Moorhead coach Jon Ammerman, who played in two championship games.

“We, being the community, haven’t had the opportunity to win one yet, but these are new guys. When you keep giving yourself an opportunity, eventually it will happen.”

The Spuds defeated Lakeville South 3-2 in the first semifinal game Friday and will go for its first championship in its eighth title game appearance Saturday.

“We just want to be the first ones (win the title),” Randklev said. “It would bring us a lot of honor.”

It was South with a 1-0 lead and the advantage in play after the first period thanks to a late Zachary Bauer goal, but the Spuds buckled down and took the game over in the second period. 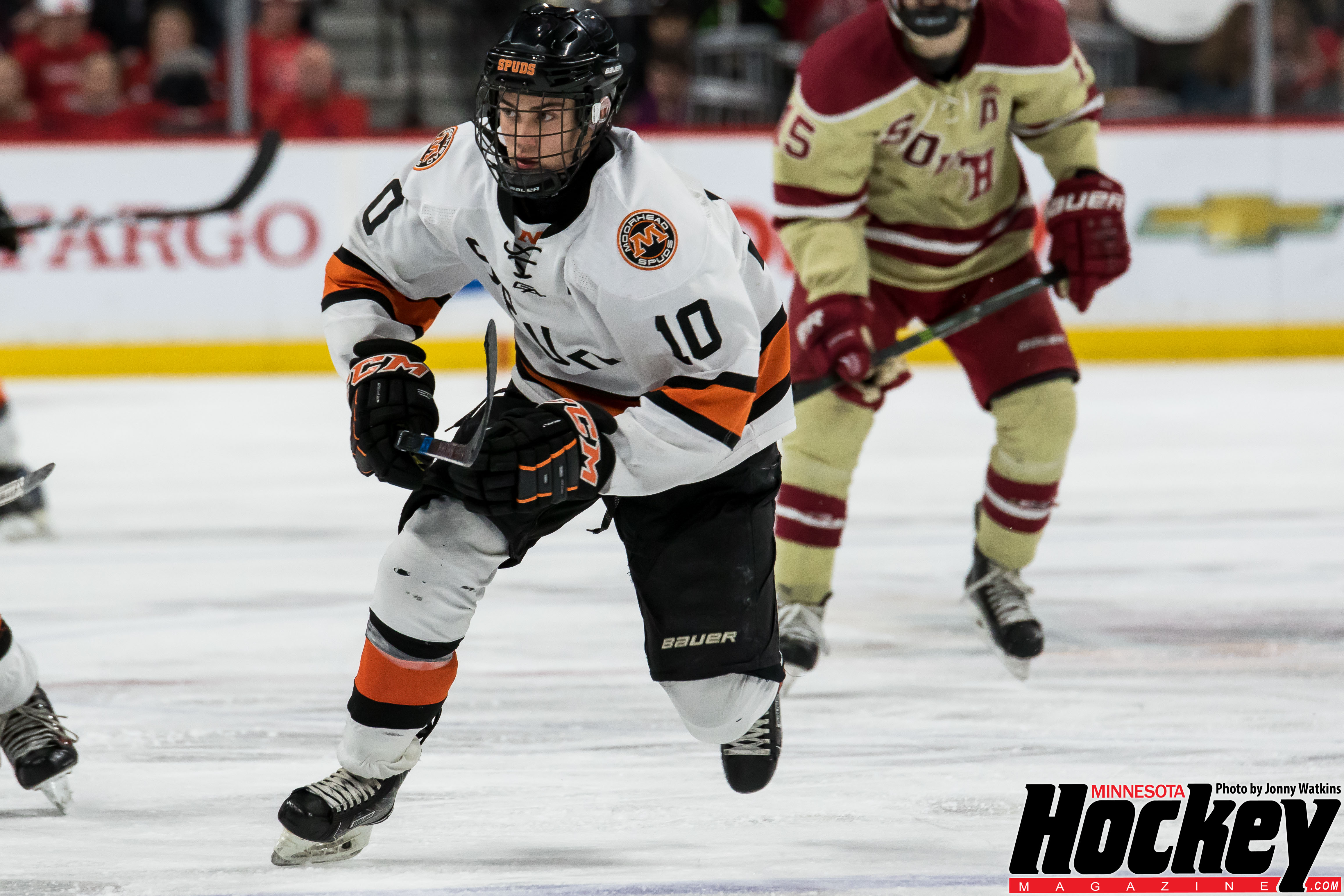 Jack Stetz tied the game for Moorhead 3:24 into the period and Carter Randklev snipeshot from the low right circle five minutes later on the power play gave the Spuds the lead for good.

“The first period was not how we normally play or how we want to start out,” Randklev said. It was Randklev’s 32nd goal of the season and second of the tournament.

Kyler Kleven added an insurance goal for the Spuds early in the third period, but player most deserving of praise in the final stanza was goalie Lance Leonard.

Leonard made 20 of his 39 total saves in the third period.

“Our defense did a great job of keeping (South’s shooters) to the outside,” Leonard said. “I didn’t have to make a ton of difficult, moving, out-of-position saves.”

Leonard’s only blemish in the third was a late goal by Joshua Ess with 1:27 left in the game.

As Ammerman, Leonard, Randklev and Carter Howell took questions after the game, they didn’t know who they’d face in the championship, but on the surface, that didn’t seem to matter.

“I don’t know that we really talk about the other team a whole lot or make adjustments,” Ammerman said as he looked at the three players sitting next to them. They shrugged and nodded in agreement.

Moorhead handled Grand Rapids 4-0 Feb. 11 and didn’t play Eden Prairie this season, but for history’s sake, the Eagles were the last team to beat the Spuds in a title game (2009).

But Ammerman was quick to point out, this group was most likely in the early stages of youth hockey in that game.

“Do the kids know the history of Moorhead hockey? Of course they do,” Ammerman said. “When I was playing, they were like three (years old) and in the 90s, they weren’t alive.

“They’re writing their own history right now and we’ll how that ends.”