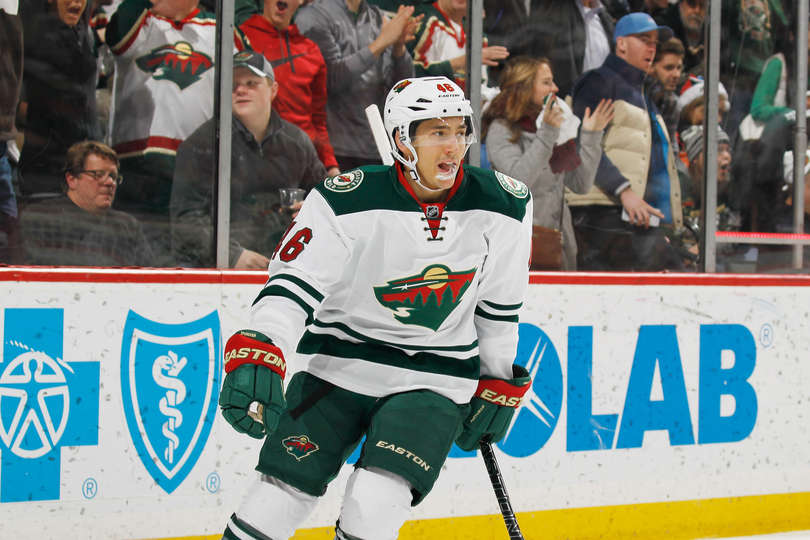 Saint Paul — When Jared Spurgeon got up Monday morning, he probably didn’t figure he’d be getting and giving Christmas gifts before the day was over.

But Spurgeon, who turned 26 less than a month ago, signed a four-year, $20.75 million contract extension with the Wild during the afternoon, then scored a dazzling, unassisted goal to open the scoring in Monday night’s game against the Dallas Stars.

However, a spectacular day for Spurgeon and the Wild unfortunately turned sour.

“A lot of emotions for him, for sure,” Wild coach Mike Yeo commented.

Spurgeon was called for a phantom trip that led to a power-play goal for the Stars to tie the score 2-2 with 1:30 left in the second period. And, as time was running down in the period, Spurgeon coughed up the puck and Tyler Seguin scored the go-ahead goal as the Stars came from behind for a 6-3 victory over Minnesota in front of 19,047 at the Xcel Energy Center.

Suddenly the Wild, who did not lose in regulation between Nov. 27 and Dec. 19, suffered their second consecutive regulation loss with just a game remaining before the Christmas break.

It shouldn’t be cause for panic – the Wild are 17-9-6 after 32 games – but the result removed some of the Christmas cheer from another standing-room-only crowd at the X.

“It’s not the game you want,” Spurgeon observed.

Minnesota led 2-0 through one period plus 14 minutes of the second before the Stars scored four times in less than eight minutes.

“Definitely painful,” Nino Niederreiter said. “I felt like we had a really good first period and the second period we kind of pulled back a little, didn’t play quite as hard as we should have. And then they got a sniff when they got the first goal and they kept going and going.”

Yeo blamed the turnaround on a suspicious penalty against Mikael Granlund for what Yeo called “a clean check.” It put both teams a man short, and another penalty against Mikko Koivu 32 seconds later gave the Stars a four-on-three edge in skaters. The Wild survived the penalties, but any momentum they had was gone.

“It was a different game from that point on,” Yeo said.

Jordie Benn’s shot sneaked past goalie Devan Dubnyk at 14:59 of the second period to make it 2-1, and the questionable tripping penalty against Spurgeon came just 1:33 later, leading to the tying goal.

He was victimized again when Sequin made it 3-2 with 32 seconds left in the period.

Sequin was open and “buried it,” Spurgeon said. “A guy like that, you can’t let him get behind you.”

Even though Charlie Coyle and Niederreiter joined Spurgeon on the scoresheet and snapped out of goal slumps by scoring, the Wild were unable to recover. Niederreiter’s goal made it 4-3 after 10:26 of the third period, but two empty-netters ruined any comeback hopes for the home team.

The result certainly dimmed the mood for Spurgeon, who nonetheless managed to take a look at the big picture and explain why he decided to sign rather than become a restricted free agent after this season.

“You look at the guys in the room,” he said. “Just the feeling we have around here and the commitment the guys have to each other. I think we’re ready to win and I think this year we’re pushing toward that. It’s exciting to be a part of the Wild and I’m just thankful they gave me the opportunity to stay here.”

Yeo tried to also talk optimistically about his team’s future.

“We want to prove that we’re one of the top teams in the league,” he said, noting that although the Wild were unable to do that Monday, “lucky for us, we get another chance.”

The result left the Wild still chasing the Stars, who have a 25-7-2 record, going into Tuesday night’s pre-Christmas finale. And life does not get easier: They entertain the Montreal Canadiens, who lead the Atlantic Division with 43 points.