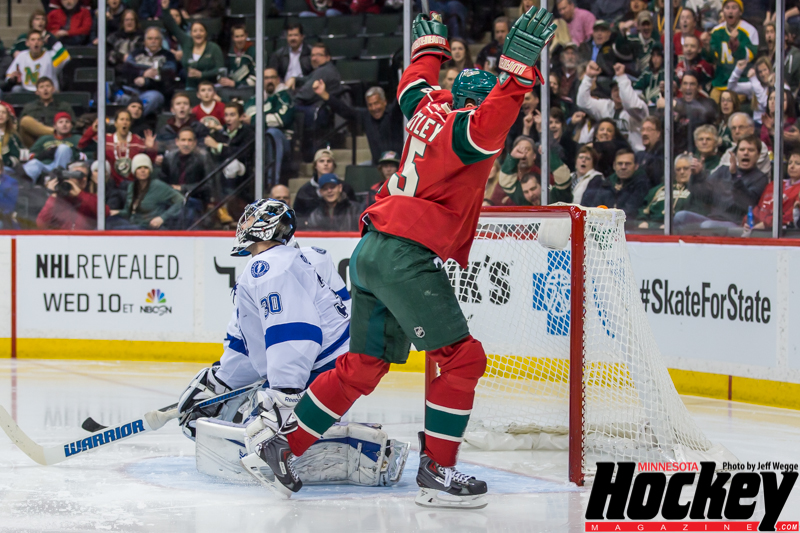 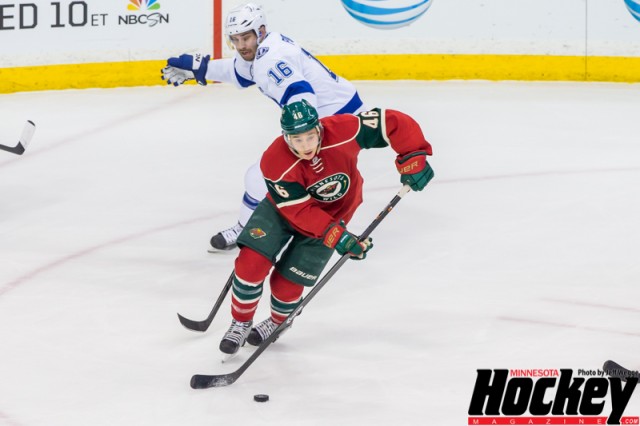 Spurgeon logged 20 minutes of ice time and assisted on both Wild goals in his return to the lineup. Photo by: Jeff Wegge

The Minnesota Wild returned home from a four game road trip for the first of two games before the Olympic break and defeated the Tampa Bay Lightning by a score of 2-1 at the Xcel Energy Center Tuesday night.  The win picked up a critical two points in the Western Conference standings as the race is tightening up and marked the return of defenseman Jared Spurgeon to the lineup who had an impact on the outcome of the game with two assists.

Darcy Kuemper got the nod in goal again for the Wild as Mike Yeo stuck with his young goaltender who was pulled from the Colorado game and allowed four goals in their 4-3 overtime loss at the hands of the Calgary Flames.  Yeo’s move paid off  as the rookie stopped 33 of 34 shots fired at him, including a few big ones during a hair-raising finish that saw the Lighting ring one off the post in the closing seconds of the game as they came hard in a bid to force overtime.

“It’s too bad we couldn’t hold onto that two goal lead that makes it a little bit easier,” Kuemper said.  “We gave that up and obviously, they were going to come strong at the end there and I thought we did a good job to weather them and got a little lucky in the end with the post.”

It was a big test for Kuemper at the NHL level considering he did not get the results the previous two games that he was experiencing during his hot streak.  The young goalie shrugged it off looking to past experiences and said, “I have been in this situation before at different levels.  It was nothing new really, obviously the first time at this level but you just got to treat it the same way and that’s what I try to do and just stick to the fundamentals and things will turn around.”

In his first game back after missing 14 games with a lower body injury,  Spurgeon’s impact was not only felt but needed.  He looked to be in mid season form with his effort as both assists were made on solid plays.

Spurgeon fired a puck on goal toward the glove of Tampa Bay goalie Ben Bishop on a power play in the first period that the goalie couldn’t handle with his glove.  The rebound plopped to the ice in the crease and Nino Niederreiter quickly slapped the puck past Bishop for his 10th goal of the season giving the Wild the 1-0 lead at 16:04.

After a scoreless second period,  Spurgeon carried the puck up the right side of the Tampa Bay zone, the Lighting defense stayed with him and he was forced to stay on the puck as he was checked in the right circle by the Lightning net.  He didn’t give up on the play and found Dany Heatley at the top of the crease for a quick tap in as the Wild winger was racing straight ahead to the Tampa Bay net.  It gave the Wild a 2-0  lead :34 into the third period.

After being off the ice for almost a month Spurgeon was glad to get a game under his belt and a productive one at that.  “It was nice to get it back out there, especially before the break and the team’s been playing great and I was just trying to get in there and make sure I  didn’t ruffle any feathers with the chemistry that’s been going on,” he said.

Marco Scandella was inured early in the first period meaning there would not be any time to ease into the game for Spurgeon as the Wild were forced to work with five defenseman.  Spurgeon picked up 21:!2 of ice time in his first game back and pointed to the forwards back-pressure as the key to making things easier on the Wild defenseman.

Heatley continues to have a hot hand as he now has 11 goals on the season  and has picked up 2g-2a-4pts in his last three games and delivered his second game-winning goal of the season.

The win was a big for the Wild as teams tend to have let-downs in play after long road trips.  Minnesota didn’t allow  that to happen. “There’s always talk about coming off a long road trip and that first home game,” Heatley said.  “Guys were ready to play tonight,  Kemps was sharp, and our PK and defensive game was pretty sharp, and we got timely goal scoring.”

The Lightning struck for their lone goal with just over six minutes left in the game setting up the dicey finish. The win was the 20th on home ice for the Wild this season and earned them two more points in the now tightening Western Conference Playoff race.

Minnesota has another key Central Division game with the Nashville Predators at the Xcel Energy Center Thursday that is the last game before the Olympic break.  It represents another key two points as the Predators are standing in 12th place in the Western Conference just 8 points behind the Wild with one game in hand.

News and Notes:
Tonight’s game was the second of two between the clubs this year.  Tampa Bay won the first match-up by a score of 3-1.  The Wild own a 10-4-2 record all time agains the Lightning that includes a 6-2-0 record at home and 4-2-2 record in Tampa Bay.

Winning at Home
Minnesota won for the 20th time on home ice this season and are 20-7-2 at the Xcel Energy Center and have won 16 of their last 20 home games this year.  Last night’s crowd was announced at 18,454.

Wild Milestones:
Jonas Brodin played in his 100th career NHL game against the Lightning and Mike Rupp 99 career points (54-45-99) is about to hit the century mark in that category.

Minute Munching
An injury to Marco Scandella forced the Wild to play with five defenseman on Tuesday night.  Ryan Suter took on 34:31 of ice-time and it marked the fourth time in five games that he has topped the 30 minute mark.  He has seen the 30-minute mark 28 times this season.  He has earned 33 points (6g-27a-33pts) this year and leads the Wild with 94 blocked shots including two against the Lightning.

Kuemper Steady
Last night’s start was the 11th straight for rookie Darcy Kuemper which continues to add to the club record of consecutive starts by a rookie goalie.  The previous mark was four. He is now 7-3-2 on the season.  The former Red Deer Rebel (WHL) won the Del Wilson Trophy as the WHL’s top goaltender in 2010-11 and is accustomed to taking on a  heavy workload.

Polar Vortex White Jersey Night
Fully embracing the bitter cold and snow filled winter this season, the Wild announced Polar Vortex White Jersey night for the game against Nashville on Thursday night.  Each fan will receive a white t-shirt to create the “Whiteout” effect in the Xcel Energy Center and a Sochi send-off poster that features the five Wild Olympians.