Goals will come for Huskies, but questions remain to be answered in the crease. 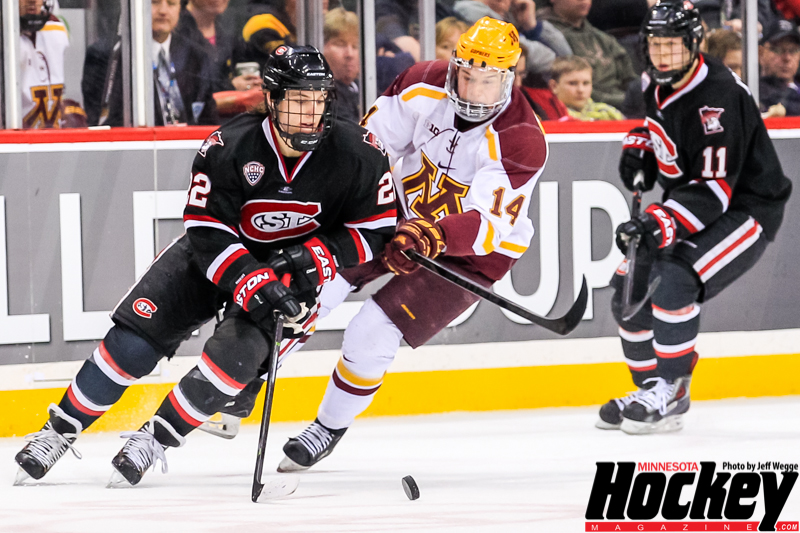 Goals will come for Huskies, but questions remain to be answered in the crease.

After capturing the inaugural Penrose Cup as NCHC regular season champions, Husky fans can and should expect more of the same out of their squad in the 2014-15 campaign. Regardless of losing those who moved on in their hockey careers, the Huskies look deeper and as talented as ever, which will be essential as they approach one of the toughest first six weeks of hockey in the country.

A new, yet recognizable southpaw is assumed to take reign between the pipes after the departure of goaltender Ryan Faragher. While Charlie Lindgren did manage to see ice in ten games last season, tallying a 2.42 GAA, with a .905 save percentage, more time will tell if he’s ready to hold those reigns and there may be a tight leash with solid goaltenders in Rasmus Reijola and Joe Phillippi nipping at his heels.

While Lindgren’s numbers aren’t staggering, a murmur amongst Husky nation began last season, with the desire to see him take over the position as Faragher seemed to have some struggles.

“If you’re going to play at a high level and be an NCAA tournament team you’ve got to have goaltending at a high level,” SCSU coach Bob Motzko said. “Charlie Lindgren and Rasmus Reijola are the candidates right now for the first look at it, and they’re ready for it.”

“Even Joe Phillippi has won everywhere he’s been.”

Scoring goals hasn’t been an issue in for the Huskies in recent history, averaging 3.6 goals per game last season, but with the recent loss up front of Nic Dowd, vacancies at the center position will need to be filled. While the game is now tailored to a smaller player, the Huskies average height of 5’9” might be a detriment once they get bottled up by bigger squads on smaller sheets of ice with less room to work.

Another concern, founded in the second half of last season, is the inconsistent defensive effort. With most blueliners coming back, there is reason to expect better play in front of whoever wins the goaltending battle.

The Huskies’ 2014-15 season got underway with an 8-0 exhibition win over Trinity Western University on Friday, Oct. 4. The Huskies open the regular season this weekend hosting Colgate before traveling to Schenectady, N.Y. for a showdown with defending national champion Union.

Husky fans, though, are already anticipating the Halloween showdown between SCSU and the maroon and gold of the Minnesota Gophers, set to take place at 7:37 p.m.

Why the Huskies will exceed expectations: The team is built around speed and playmaking ability, with half their games on Olympic sized ice the team should be able to improve on last years home record of 7-6-5. The addition of talented freshmen makes for an impressive depth-chart, regardless of the loss of Nic Dowd. Offensive production has never been an issue for the red and black, something that should only increase in the 2014-15 campaign.

Why the Huskies will fall short of expectations: The blue paint. Scoring will not be an issue this season as many of the Huskies’ game’s in the past have turned into an offensive display of ‘can you top this’, but there is reason to be worrisome for the 2013-14 NCHC Champions. The blueline struggled in the latter half of the season, producing a mental stress on netminder Ryan Faragher that was evident in his play between the pipes. In the blue paint this season will most likely be sophomore Charlie Lindgren, a ‘veteran’ of ten games last season. Goaltending will make or break the 2014-15 Husky season.