St. Cloud State rookie netminder contributes on both ends of the ice in debut. 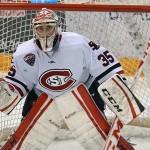 ST. CLOUD—Charlie Lindgren hadn’t had to do anything too spectacular on the first 14 saves he made his collegiate debut against Bemidji State.

Save No. 15 was spectacular.

The St. Cloud State freshman goaltender from Lakeville sprawled from left to right to rob BSU’s Phillip Marinaccio to prevent the Beavers from taking a 3-0 lead two minutes into the third period.

SCSU defenseman Kevin Gravel scooped up the puck and took it to the opposite blue line, fired a wrist shot and scored.

That padded Lindgren’s offensive numbers:  one point through one game.

“I knew the guys needed a big save and fortunately I got there,” said Lindgren, who helped the Huskies complete the comeback in a game that ended 2-2.

“Gravs took off down the ice and got a good shot. That was a big momentum boost for our team there.”

Lindgren finished with 19 saves, but facing a puck-control team like BSU which doesn’t take a great amount of shots, Lindgren wasn’t forced to make a lot of saves.

The first goal Lindgren allowed was a shot from the point through traffic that popped over his right shoulder. BSU’s Nate Arentz beat Lindgren 5-hole in the second period to put the Huskies in a 2-0 hole.

But Lindgren came up with the big save on Marinaccio in the third that changed the tide of the game and it was the only big save he was forced to make through the entire 65 minutes of his debut.

“He was fighting it a little bit and he didn’t have to make many big saves until that two-on-one,” SCSU coach Bob Motzko said. “He gave us a chance and made the big save in the third period on the two-on-one backdoor play. It’s very athletic that he can do that.”

Faragher was thrown into the fire untested when he was a freshman in 2011 after SCSU’s No. 1 goalie Mike Lee got injured in October.

Faragher played 40 of SCSU’s 42 games last season but Lindgren will challenge Faragher for starts more than Joe Phillipi and Rasmus Reijola did in 2012-13 and gives the Huskies a stronger tandem in net.

“I just have to keep working hard and earning my playing time,” Lindgren said. “It was nice to get my feet wet tonight.”

Lindgren was named Dave Peterson Goalie of the Year, an award given to the best American-born goaltender, by USA Hockey in May.

Lindgren, a 2012 Lakeville North graduate who took the Panthers to the Minnesota State High School Hockey Tournament in 2010 and 2011, won 49 games in two seasons with the Sioux Falls Stampede of the USHL.

“I felt really good tonight,” Lindgren said. “It’s a moment I’ve been waiting for a long time. I grew up watching St. Cloud and to be able to come in and play tonight was pretty surreal.

“Hearing those fans and just being on the ice really felt good from the get-go.”