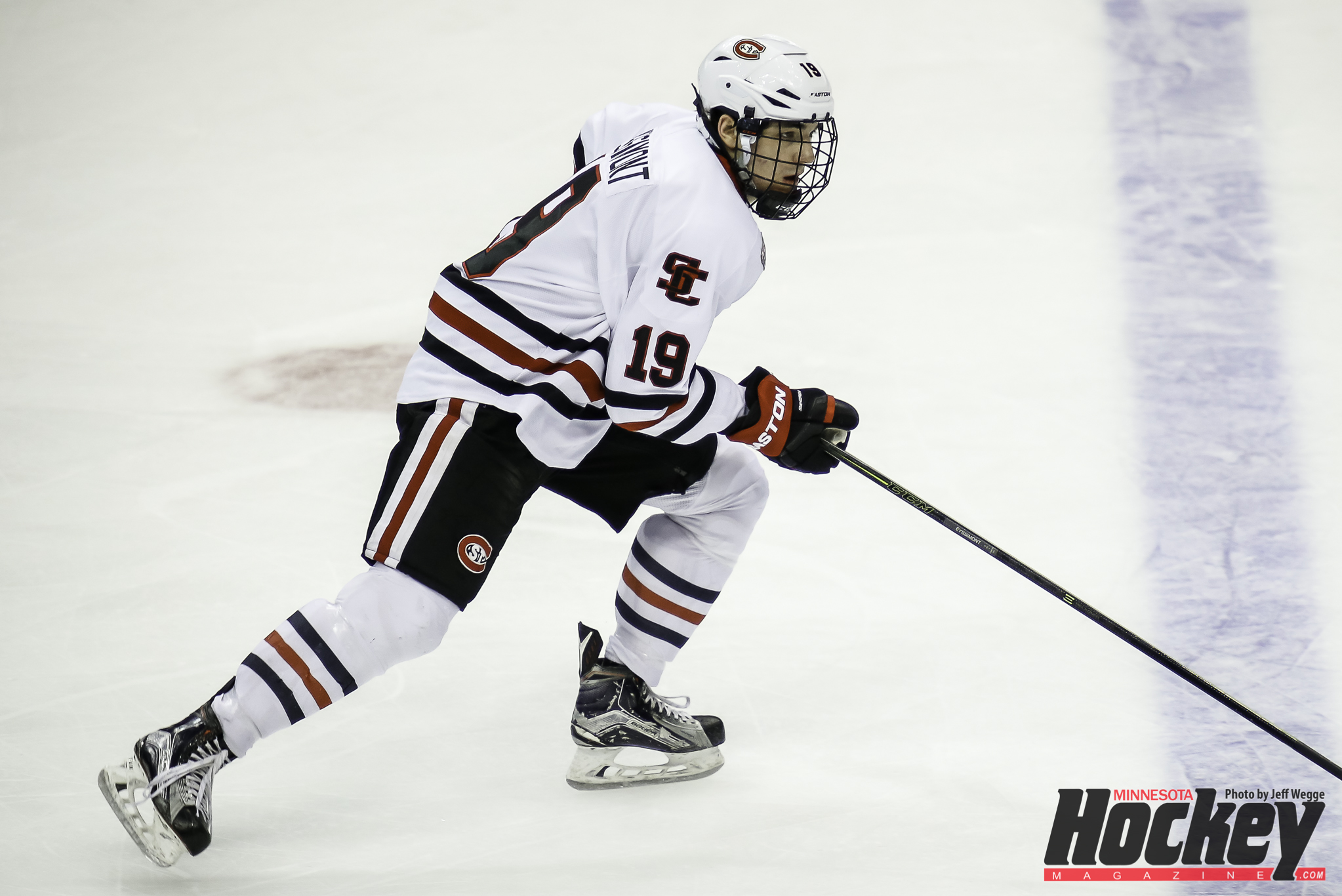 Sophomore forward Mikey Eyssimont will be counted on to build off the offensive success of the second half of his rookie season. (MHM Photo / Jeff Wegge)

St. Cloud State advanced to the NCAA tournament for a fourth consecutive season in 2015-16, but to get back they’ll have to adjust to a new cycle of players fast.

“Everyone always tells me how many guys we lost, and what kind of scorers we lost, but we’ve got plenty of guys who can replace those guys,” Jimmy Schuldt said. “We’ve got two really good defensemen coming in, two really good goalies coming, and I think depth is our strength this year.”

The Huskies expected to lose Ethan Prow, Kalle Kossila, Joey Benik, Jimmy Murray, and David Morley to graduation. They even begrudgingly accepted that their number one goaltender, Charlie Lindgren, was going to move on after his junior season. However, Patrick Russell left after scoring 20 goals, and 21 assists during his sophomore season to sign an entry level deal with the Edmonton Oilers. His early departure meant that Motzko was going to have to replace his entire top six scorers and his number one goaltender for 2016-17.

Last year coach Bob Motzko said he knew his power play before they even suited up, and knew who our number one goalie was when he started planning for the season. The challenge this year is to figure out where all the pieces fit and he’s excited about the opportunity to coach again and the test to figure it out.

St. Cloud State has some incoming talent like defenseman Dennis Cholowski, drafted 20th overall in the NHL Draft by the Detroit Red Wings, the highest ever selection for a Huskies player or commit. They also have Jack Ahcan coming in after being named the USHL Defenseman of the Year last season. And then Ryan Poehling accelerated his high school studies to join St. Cloud State and his brothers a year earlier than anticipated. Ryan Poehling’s 2017 NHL Draft future also looks favorable after getting one of the 29 A ratings assigned by the NHL Central Scouting.

The picture in goal isn’t so clear. Motzko looks for athletes with great character, a track record of being successful, and thinks they have three guys who fit that bill, but the only thing they don’t have is a lot of minutes played in college hockey and they’re going to give them that opportunity.

The candidates include returning sophomore 22-year-old 5’11” David Zevnik, who played at St. Thomas Academy, and joined the Huskies as a recruited walk-on after two years with the Wichita Falls in the NAHL. The new goalies are 21-year-old 6’2” Jeff Smith, a transfer from UMass-Lowell who played three years with Powell River in the BCHL, and 19-year-old 6’0” Zach Driscoll who played at Eastview HS, Austin in the NAHL, Omaha in the USHL, and Penticton in the BCHL. All three goalies played a period in the St. Cloud State exhibition game against Regina.

“We just went through nine years of outstanding goaltending, from Mike Lee to Ryan Faragher to Charlie Lindgren, and that’s a pretty good run–we just got to make sure it’s a fourth run,” Motzko said.

“We’re a young hockey team with a new goaltender, I think we can score goals so that gives us a chance. Now can we keep it out of our net to give us a better chance.”