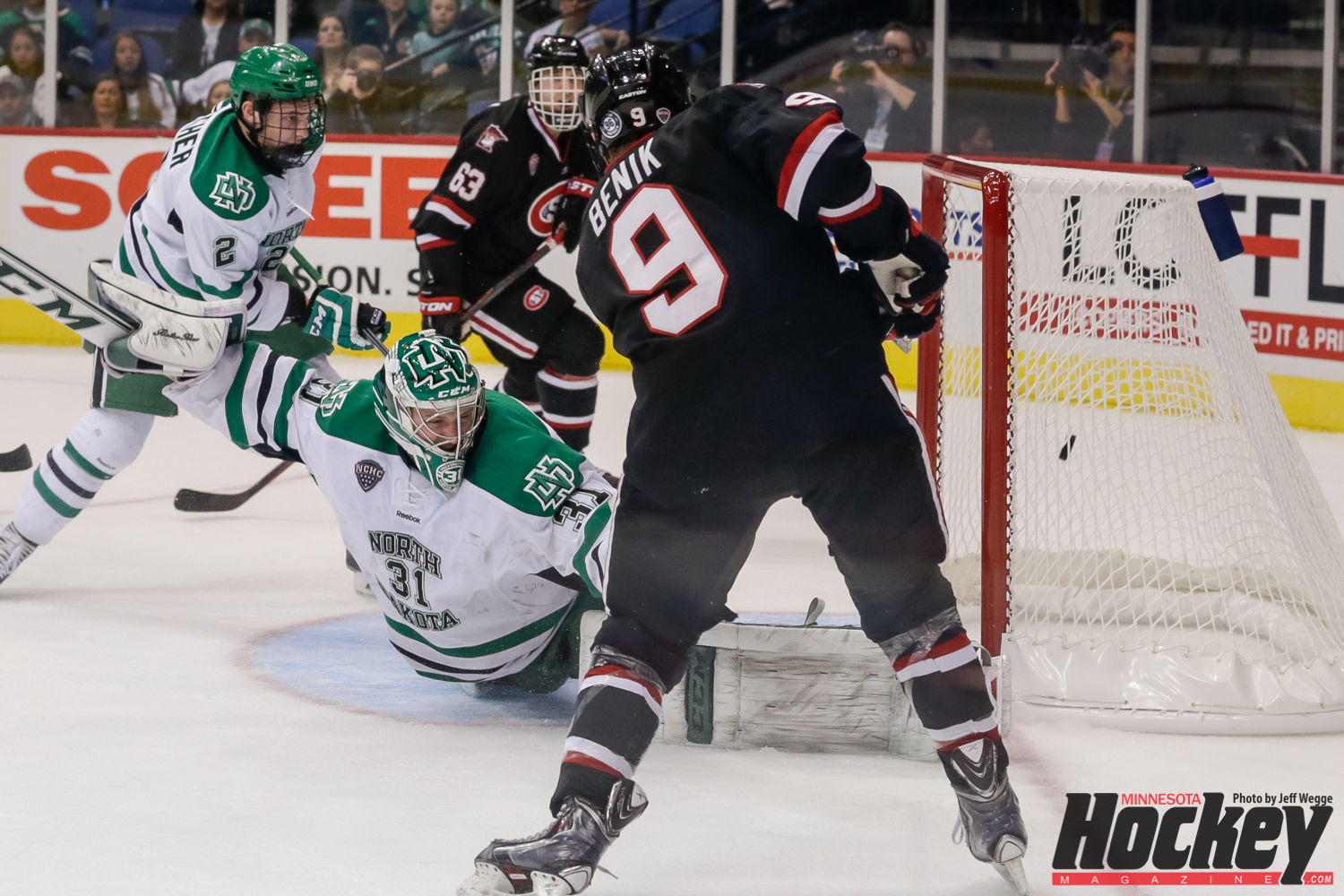 Joey Benik’s goal for St. Cloud State with 5.4 seconds remaining in the first period proved to be the difference in the Huskie’s 3-1 NCHC Frozen Faceoff semifinal win over North Dakota on Friday afternoon at Target Center. (MHM Photo / Jeff Wegge)

MINNEAPOLIS —Twenty-five seconds may not be a lot of time in some cases. Unless you’re a hockey team that used that time to score a couple goals.

That was ultimately all it took for No. 18 St. Cloud State University (19-17-1) to score two goals and upset No. 1 North Dakota (27-8-3) 3-1 in the semifinals of the NCHC Frozen Faceoff Friday at Target Center. The win sends the Huskies to the championship game Saturday.

SCSU looked to be headed into the first intermission down 1-0 to UND. Then the final seconds of the first period changed the course of the game. SCSU went into the locker room with a 2-1 lead that it never relinquished.

Their first goal came with 24.5 seconds on the clock. Junior forward Jonny Brodzinski took the puck around the back of UND’s net, then passed it out front to a waiting David Morley, who buried it for his 17th goal of the season.

Tying the game when they did gave the Huskies some momentum. The result of that swing was almost immediate. They drove the net again and Benik shot a loose puck into a wide-open net as the clock showed 5.4 seconds.

That turned out to be the game winner, as SCSU blocked shots and stepped up defensive play for the next two periods on the way to the victory.

For SCSU Coach Bob Motzko, the task coming into the game was to play a solid first period. That mission seemed to be accomplished on the scoreboard, despite how they knew UND was capable of playing early in the game.

“They (UND) want to come out and dictate it early… and then smother you,” he said. “We have to counter that.”

Even after getting behind, the attitude on the SCSU bench remained positive, according to Motzko, who added that his team is playing its best hockey in the past month or so.

On the other bench, UND Coach Dave Hakstol had his own evaluation of how that final minute of the first period went down.

“Well, it was sloppy,” he said. “We weren’t sharp through a lot of the game. That 25-second time period was real indicative of that.”

UND’s lone goal came from Keaton Thompson on a blast from the point that made it through traffic in front of goaltender Charlie Lindgren. Thompson credited his teammates in front of the net on the play.

“I just tried getting it through,” Thompson said. “The goalie couldn’t even see it.”

Hakstol said his team “turned a corner” with its play in the second half of the game and did its best to tie the game. But SCSU’s “hard and hungry” play was something UND wasn’t able to conquer.

“Playoff time, one goal is, it’s critical,” he said. “It’s a tough deficit.

“We needed to be a little bit better tonight.”

That’s not to say UND didn’t have its chances. They had a few close scoring chances and were pressuring in the final 40 minutes of hockey but to no avail.

UND pulled goalie Zane McIntyre with 1:12 left in the game, and Joe Rehkamp scored the empty netter seven seconds later to ice the win for his team.

SCSU goaltender Charlie Lindgren improved to 18-16-1 with the victory. He made 19 saves against the nation’s No. 1 team.

“He’s been dialed in for awhile for us,” Motzko said.