Hockey Day stage not too big for young Huskies blueliners 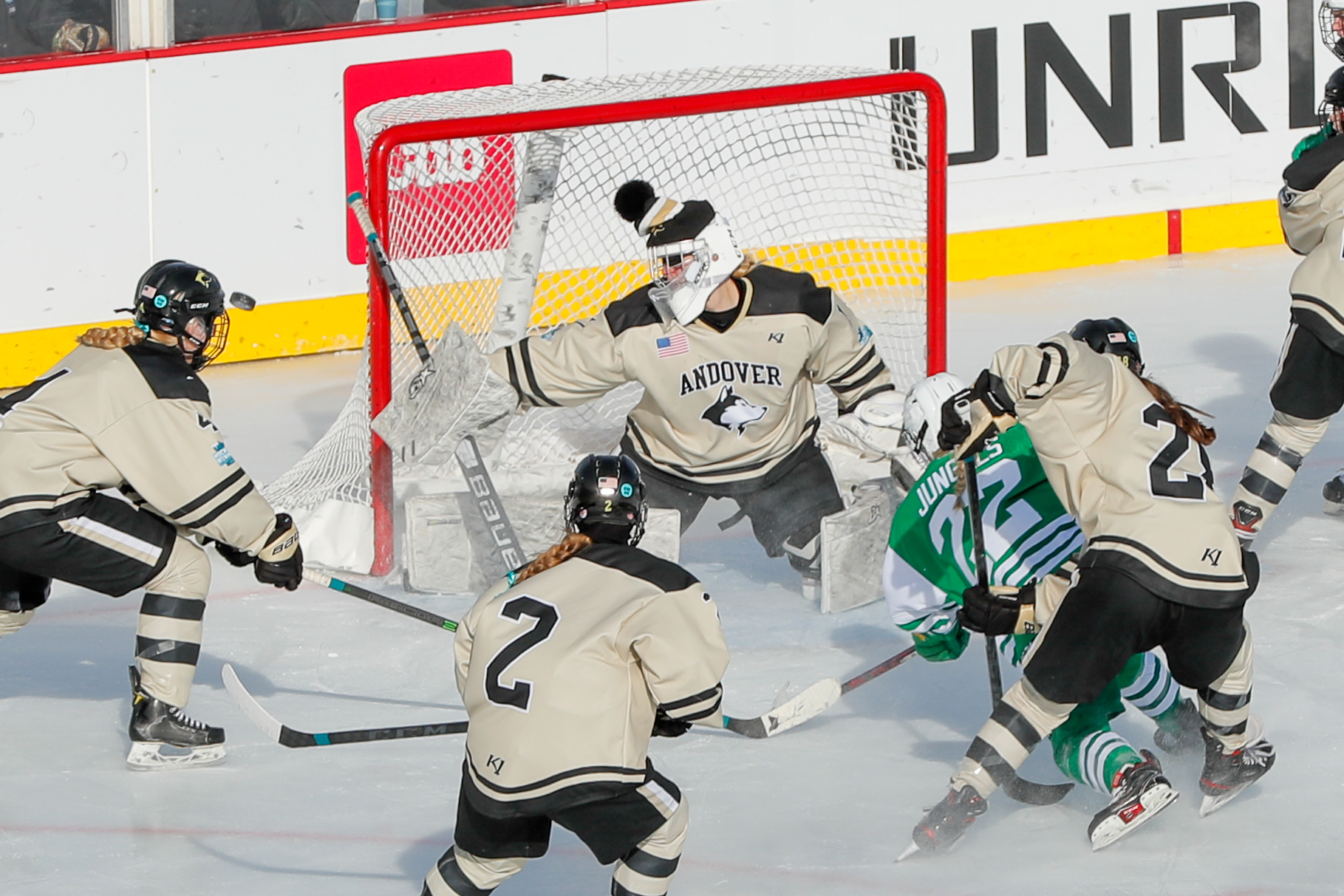 Andover junior goaltender Courtney Stagman got the sunny side of the ice for two of the three periods. To cope, she added an extra accessory to her head besides her mask and stocking hat: A pair of sunglasses.

“(They) really blocked the sun,” Stagman said. “You could see the puck. It was really nice.”

She might consider wearing sunglasses all the time if they help her get the same result as the 4-0 shutout of Edina on Hockey Day Minnesota. Stagman made 24 saves on the sheet of outdoor ice at Blakeslee Stadium in Mankato for her sixth shutout and 17th victory of the season. She earned it, especially when the Hornets made a push in the third period.

The result was a dream come true for the Andover goaltender.

“My dream has been to shut out Edina,” Stagman said. “And the girls really helped me achieve that. They just threw their body in front of the pucks and helped me out as much as they could.”

The defensive corps in front of Stagman is full of young, fresh faces this season. Four of the top-six at the blue line are freshmen – Mackenzie Jones, Avery Kasick, Courtney Little and Ella Thoreson. Merill Delich and Cailin Mumm are sophomores. No matter their age or experience, the Hockey Day “lights” definitely weren’t too bright for them.

“We were just trying to get sticks in front of the net and try and clear them out and not let them get a lot of shots,” said Mumm, the only returning defenseman this year.

The top-ranked Huskies shut down the second-ranked team in the state and a program that’s won four of the past five Class 2A state titles; Andover won the other one, in 2020. The Huskies also shut down one of the top defensive players in the state in Edina senior Vivian Jungels.

So how did the Huskies do it? Simple.

“It’s a different game, an outdoor game,” said Andover coach Melissa Volk. “Pucks are bouncing and stuff, so we just really emphasized on keeping it simple. Clean breakouts to the outside.”

Mumm and Little also contributed to the team’s offense. When Andover took a 1-0 lead eight minutes into the game, the goal came on a crashing-the-net situation. Sophomore Nora Sauer jammed the puck home while Little was credited with the assist.

Only 1 minute, 4 seconds later, Andover doubled its lead with a goal from its dynamic top line. Junior Madison Brown took the puck behind the net and fed it out front to junior Ella Boerger who was left all alone in the slot. She didn’t miss with her quick shot for the 2-0 lead.

As the Huskies kept the puck in the offensive zone early in the second period, Mumm saw an opportunity from the point and fired the puck toward the goal. Senior Sara Kaiser was waiting in front, snuck around Jungels and tipped the puck in. Boerger added an empty-net goal with a few minutes left in the third period to bring her team-leading totals to 21 goals and 44 points this season in 19 games. She has 31 points in her past 11 games.

The Huskies controlled much of the play almost from the start, outshooting Edina 13-5 in the first period. But by the third, Edina pressured more and outshot the Huskies 12-5 as it looked to at least get one puck past Stagman. For Edina, junior Uma Corniea, who leads the state in goals-against average and save percentage, allowed three goals. The only other time she allowed that many this season was in the team’s only other loss, 3-2 in overtime to Minnetonka in the holiday tournament.

Andover preaches mental toughness, and having that aspect to its game paid off with the added element of TV timeouts, which made the game “a grind,” Volk said.

“Then the kids are getting a little fatigued, I would say, mentally, just because there’s so much hype the last couple days,” Volk said. “Just push through it. Obviously, third period we gave Edina a lot of opportunities, but we also pushed through it and did what we had to do to get the win.”

The win, and a shutout of Edina. That’s not something many teams in recent memory can say they’ve achieved.

Since Edina coach Sami Reber took over behind the bench for the 2016-17 season, the Hornets have been shut out two times – both against Andover. Edina’s only loss of the 2019-20 season was the opening game, a 1-0 loss to Andover with then-No. 1 goaltender Amanda Pelkey in net for the Huskies making 25 saves.

In the past decade, Edina was shut out only 11 times including the latest Hockey Day loss. On the flip side, Edina has 11 shutout victories this season alone.

The last time it lost by a four-goal margin in a shutout was the section final in 2013-14, a 4-0 loss to Eden Prairie. That was the same season Reber was a junior for Harvard, in the middle of a career-high 8-goal season with 28 points.

Andover grabbing an early lead and controlling play Saturday was awesome for the team, according to Mumm.

“Very happy with how we played today and glad that we could pop some in the net,” Mumm said.

The Hockey Day Minnesota game was a rematch of the 2021 Class 2A state championship game in which Edina prevailed. But this being a new season, there are plenty of new faces on each bench for the next chapter of this Edina-Andover rivalry.

“To get to play on the big stage with Edina and just showcasing how great the girls’ game is was something we were really, really looking forward to,” Volk said.