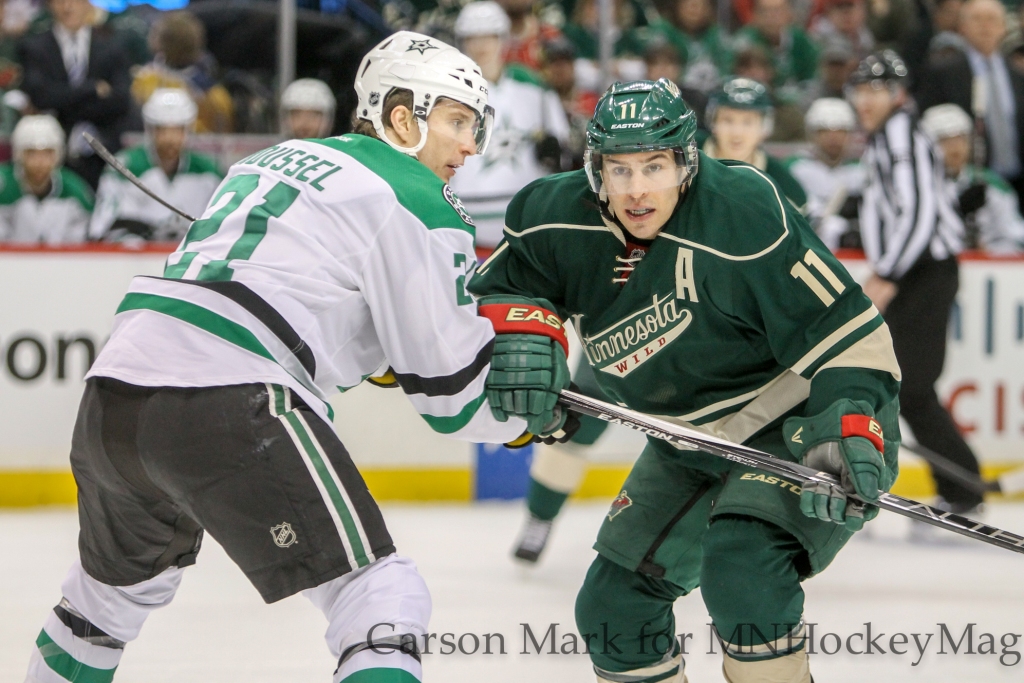 SAINT PAUL – It took awhile for the Wild Sunday night.

But heck, it took awhile this season.

On a frigid February Sunday evening, in front of 18,754 at the Xcel Energy Center, the Wild took over the game with a team-record six-goal third-period barrage to throttle the Dallas Stars 6-2.

And – boom! – they vaulted into seventh place in the NHL’s Western Conference.

The victory gave Minnesota a 31-21-7 record for 69 points, which boosted them to a position that appeared impossibly out of reach just five weeks ago when they stood 18-19-5.

At that point a website that predicts such things gave the Wild a 5.9 percent chance to make the playoffs.

However, a funny thing happened on the way to standings oblivion: The Wild acquired Devan Dubnyk to play goal, then turned around and won 13 of their next 17 games for a 13-2-2 record. They’ve now won three straight and are 11-1-1 in their past 13 games to leapfrog Los Angeles, Calgary and San Jose.

The most-recent time they were nestled among the West’s top eight teams was Nov. 24, when they were tied for eighth with a 12-8-0 mark.

Zach Parise, who scored two goals, admitted that Minnesota’s 39-game stretch outside the top eight had grown a little wearisome, if not worrisome.

“It’s nice to get in there; it’s nice to make a little movement in the standings,” Parise said. “For the longest time we were winning and we weren’t going anywhere. We know it’s a long way to go, but you’ve got to get in sometime, somehow, and it’s nice to be back in.”

With 23 games remaining, the Wild are just two points behind Vancouver and Winnipeg for fifth place in the West, but still lead Los Angeles, Calgary and San Jose by just one point.

“We’ve put in a lot of work and we’ve done a lot of good things. I’ve said this before: We’ve got ourselves back in the hunt. Now we have to take advantage of it.

The Wild had difficulty solving Stars goalie Jonas Enroth and trailed 1-0 through two periods Sunday night, but the home team was definitely at the top of its game over the next 18 minutes.

Defenseman Christian Folin got things started with a slick cross-crease pass to Parise for the tying goal just 1:40 into the third period, and Mikko Koivu’s seeing-eye goal 1:43 later gave the Wild the lead.

Stephane Veilleux, Matt Dumba, Mikael Granlund and Parise added to the offense with four more goals in less than 10 minutes to put this one away.

Granlund had a goal and two assists, Folin had his first NHL multipoint game with two assists and Dubnyk raised his record with the Wild to 13-2-1 with a 1.64 goals-against mark and a .936 save percentage.

And the six-goal surge sent the sellout crowd happily out into the sub-zero cold of downtown St. Paul in a boisterous mood.

The home team had, for at least this one night, vaulted strongly into a playoff picture that previously had seemed more elusive than a 70-degree day.

Got to like those odds a whole lot better than those of a few weeks ago.