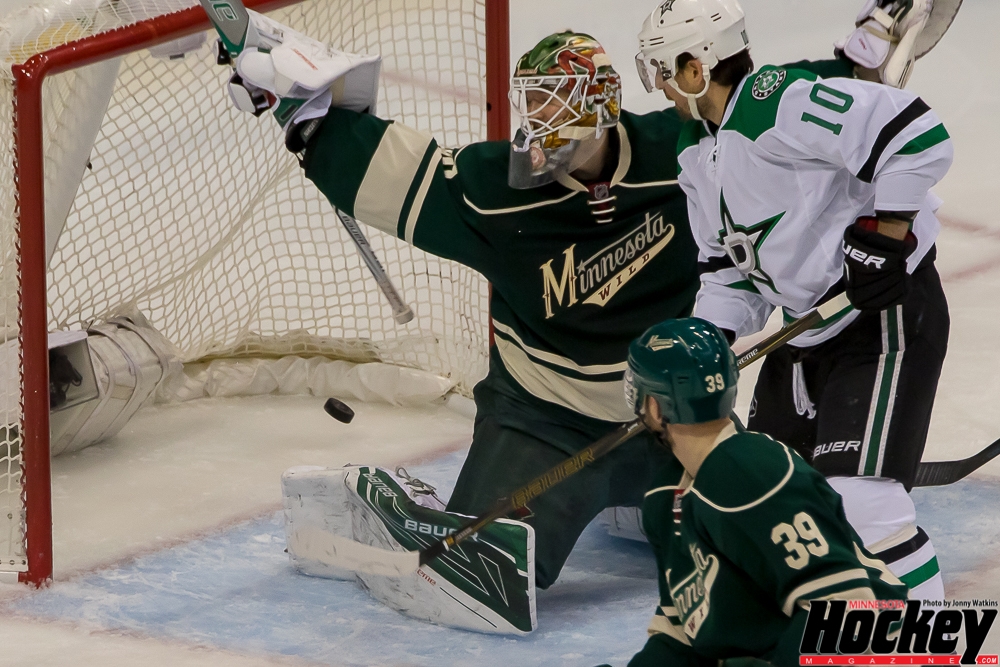 St. Paul – The Wild teased their fans this season.

Some days, they were very good.

Problem is, those days grew fewer and fewer over the second half of the season.

A team with plenty of hype and hope in October ended its play for 2015-16 with a crazy 5-4 loss to the Dallas Stars in Game 6 of the best-of-seven Stanley Cup Playoffs first round Sunday afternoon at the Xcel Energy Center.

After an improbable rally to win Game 5 in overtime in Dallas, the Wild came into Game 6 trailing 3-2 in the series but vowing that anything was possible.

The visitors took control with three first-period goals and the wound-up crowd of 19,310 — pumped even higher by pregame tributes to Prince – resorted to booing the home team off the ice.

It went to 4-0 through two periods, and what was anticipated to be a boisterous crowd became as silent as the Wild offense.

Then the Wild exploded for four third-period goals, only to lose when the Stars’ fifth goal of the game hopped into the crease under goalie Devan Dubnyk, who dropped and carried the puck into the net.

Another fluky goal for Dallas.

“Seems like there was one every game,” Dubnyk said. “It makes you feel sick to have to lose a game and a series on a bouncer like that.”

Like the final month of a hot and cold regular season, there were outstanding moments for the Wild.

“It was fun. It was a blast,” interim coach John Torchetti said. “But we didn’t get the job done.”

Now the Wild head into a summer of question marks as restless fans wonder what will re-kindle that excitement that so often rose and vanished. A new coach will almost surely be hired, but according to reports from the Twin Cities beat reporters, the job of GM Chuck Fletcher is safe.

Who will be playing for that new coach?

Collectively, this team was less consistent than undercooked oatmeal.

“That was an issue for us this year,” Dubnyk said. “It’s something we’re going to have to work to avoid.”

That inconsistency was visible up and down the lineup from Matt Dumba, Charlie Coyle, Jason Pominville, Jason Zucker, Dubnyk and even Zach Parise – who was reportedly severely hampered off and on by an ugly back injury.

With Parise and Thomas Vanek sidelined for the playoffs, there was little argument that Dallas came into the series with the better talent. But inspirational play from the likes of Erik Haula, Nino Niederreiter and Mikko Koivu sometimes made up for that.

Unfortunately, not enough other players rose to the occasion.

Zucker was among those, although he had a golden chance to erase some of that.
Instead, he lost the puck at the corner of the goal after Stars goalie Kari Lehtonen cleared it right to his stick shortly after the Wild had pulled within 4-3.

“Got to bury that,” an unhappy Zucker said. “There’s no excuse.”

Zucker, who had no goals in six playoff games, also went without a goal over his final eight regular season games. Counted on to score this season, he finished with 13 goals in 71 games.

“He’s got to have a way better year next year,” Torchetti said.

Admittedly, the Wild are mostly a team of grinders. Koivu, Parise and Ryan Suter each topped 50 points, but Parise’s 25 goals in 70 games led the team in that department. Pominville, counted along with Zucker to score, had 11 goals before scoring four in the playoffs. Justin Fontaine, Ryan Carter, Chris Porter, Jarret Stoll, Nate Prosser, Marco Scandella, Jonas Brodin and David Jones are not exactly offensive threats.

Dubnyk produced a 2.33 goals-against average during the season, a number that mushroomed to 3.34 during the playoffs.

Mikael Granlund and Jared Spurgeon, who scored two of his team’s goals Sunday, continue to play well, but neither is likely to ever lead selections for an all-star game. Mike Reilly, Christian Folin and Darcy Kuemper have potential, we have been told, and you can see it at times.

But this team needs a consistent threat to put the puck in the net.

Vanek has that capability – so did Fletcher acquisitions Dany Heatley, Martin Havlat and Petr Sykora, among others – but the question is whether Vanek is past his prime.

On Sunday, after 40 minutes, it didn’t seem to matter that neither Vanek nor Parise was around as the Wild stormed back to resuscitate what was the largest crowd of the season.

The fans got pretty loud.

“They revved it up in the third period,” Torchetti commented. “I couldn’t hear on the bench.”

However, a review of what could have been the Wild’s fifth goal late in the third period showed the puck still barely touching the goal line, a decision that went against Minnesota and allowed the Stars to hold on for the victory.

The result was an empty feeling in the Wild dressing room, according to Koivu.

“It is too early to look at the whole season right now,” he said. “There are a lot of things we’ve got to learn, and a lot of good things we can take with us and move forward.”

Minnesota’s four-goal rally was the lone consolation. Instead of ending on a totally sour note, the Wild concluded their play amid thoughts of, “If only …” An up and down season ended on something of an “up” note.

“The way we worked in the third period,” Dubnyk said, “I was proud to be back there and a part of that and watching these guys. They have no quit.”

That part, at least, has been consistent.