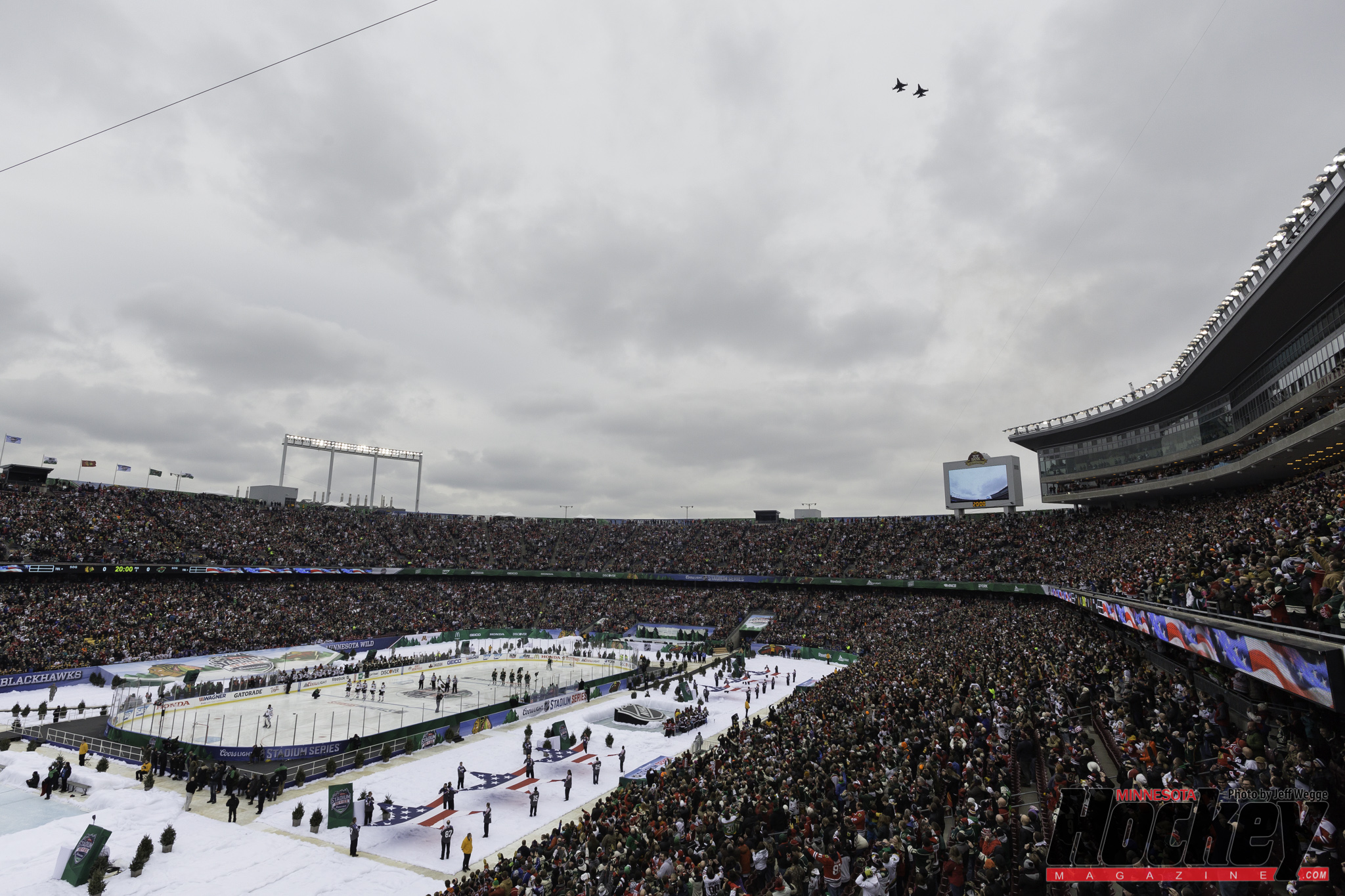 The snow falling Sunday afternoon at TCF Bank Stadium reminded the Wild winger and Minnesota native of the early mornings and late nights he spent learning to skate as a youngster. At one point, he looked up in the stands and noticed a group of kids sporting White Bear Lake jerseys, conjuring images of his youth and high school hockey days. And the University of Minnesota marching band’s rendition of “Back in Black” as the Wild entered the NHL Stadium Series rink had Carter thinking back to his two seasons of college pucks (nevermind that he spent them in Mankato).

“It was awesome,” said Carter, who had a goal and an assist in Minnesota’s 6-1, outdoor drubbing of loathed Chicago. “In the third there we got up, what was it, 5-0 or something like that, 6-1, and I sat back and said, ‘This is pretty cool.’”

Devan Dubnyk tried to tune it all out. But afterward, he stayed on the ice awhile to take it all in.

“During the game, you don’t get a chance to look around and realize the atmosphere and the size of the stadium that you’re in,” Dubnyk said. “I try not to look around to much in (the) Excel (Energy Center). I think if you look a little too high, sometimes you get a little startled by how many people are actually in there. Today was another one of those days I waited till the game was over to have a good look around.”

Matt Dumba couldn’t wait that long. The scene, the snow, the fireworks, the flames shooting skyward during player introductions — it all engulfed the 21-year-old defenseman. The adrenaline proved useful, as his rebound goal off a Carter breakaway and ensuing open-ice hit on Andrew Desjardins set up an afternoon in which the Blackhawks had zero answers for the woebegone club they’ve knocked out of the past three Stanley Cup playoffs.

“It’s kind of overwhelming,” said Dumba, sporting thick triangles of eye black under his eyes, which he said were inspired by Ray Lewis. “I was excited all day. Right when I got on the ice, I just had this energy. I just wanted to use it the right way.”

Many of the 50,426 that paid top dollar to witness Sunday’s spectacle waited years and years for it to come to fruition. The NHL powers that be finally awarded the State of Hockey one of its made-for-TV affairs that burst at the seams with nostalgia, and a team that saw its coach shown the door a little more than a week ago delivered.

But this party featured more than just the headlining act.

On a day dubbed Hockey Day in America by the league, USA Hockey and broadcast provider NBC, tailgaters lined the lots surrounding the Golden Gophers’ football stadium, some slapping pucks across the concrete and into miniature goals. The Spectator Plaza on Southeast Oak Street brimmed with Wild and Blackhawks sweaters — from the special-issue Stadium Series threads worn by players Sunday to more off-color homages, including a pair dressed as Steve Hanson and Ogie Ogilthorpe from “Slap Shot” — Coke-bottle glasses and afro wig included. Bookended by giant inflatable tabletop hockey players, the beer garden in front of Mariucci Arena was packed leading up to the opening faceoff. So was the Buffalo Wild Wings next door.

When the gates opened, they lined the concourses of this 52,525-seat stadium. It was only the second of 17 outdoor NHL games to not sell out, but the decibel levels didn’t lend much evidence to that shortcoming. Other than an F-16 flyover after Jazmine Sullivan’s national anthem rendition, and Cheap Trick’s first-intermission performance, the day’s loudest cacophonies came from steamed-up Wild fans.

And if you thought 18,000-plus singing Joe Satriani’s “Crowd Chant” after goals or chanting “Craw-ford” at the Chicago netminder was loud, try more than double that.

“They did a great job,” Dumba said of the fans, “and we put on a great show.”

So did the crew that installed and maintained the event’s makeshift sheet, according to players. With the ice lined by potted evergreen trees, gargantuan team, league and sponsorship insignia, and an auxiliary rink for youth teams, there was plenty of pomp and circumstance to go around. Apple Valley goalie Taylor DeForrest, who made 111 saves in a game earlier this winter, was honored alongside Minnesota hockey legends Aaron Broten, Neal Broten, Dave Christian, Phil Housley, Jamie Langenbrunner and Reed Larson, the University of Minnesota’s women’s hockey team and Wright Homes/FHIT, winners of the 2016 National Pond Hockey Championships open division, during the second intermission. Other participants in Saturday’s alumni game featuring past North Stars, Wild and Blackhawks greats were on hand, too; victorious coach Lou Nanne was still wearing his letterman-style North Stars jacket from the day before.

Truth is, the Wild have been in need of such a distraction.

Only eight days removed from coach Mike Yeo’s firing, Minnesota (27-22-10) won its fourth game in a row after dropping eight straight and three of 19 to start 2016. With goals from six different players, 31 saves from Dubnyk and three points apiece from Erik Haula and Jason Pominville, the Wild coldcocked Western Conference leader Chicago (38-19-5) in their most dominant performance of a season gone awry thus far. Concern still hangs heavy, even with Minnesota currently a point out of playoff contention, and players have said they’re largely responsible for Yeo losing his job.

“I think it’s up to them,” said interim coach John Torchetti, still unblemished since his call-up from Iowa to replace Yeo on an interim basis. “It’s not me. That’s the bottom line. Once you make a commitment as a teammate and your other teammates see you play at that level, then it’s up to myself and then the other players to hold everyone else accountable to that style of play.”

Suter brought his young son Brooks to the press-conference podium Sunday. As the pair got up to leave, and fans beyond the TCF Bank Stadium walls headed for their vehicles or Dinkytown watering holes to cap the weekend, a reporter asked for Brooks’ favorite part about Minnesota’s long-time-coming outdoor extravaganza.