Panthers stay together and are perfect, veteran coach takes note 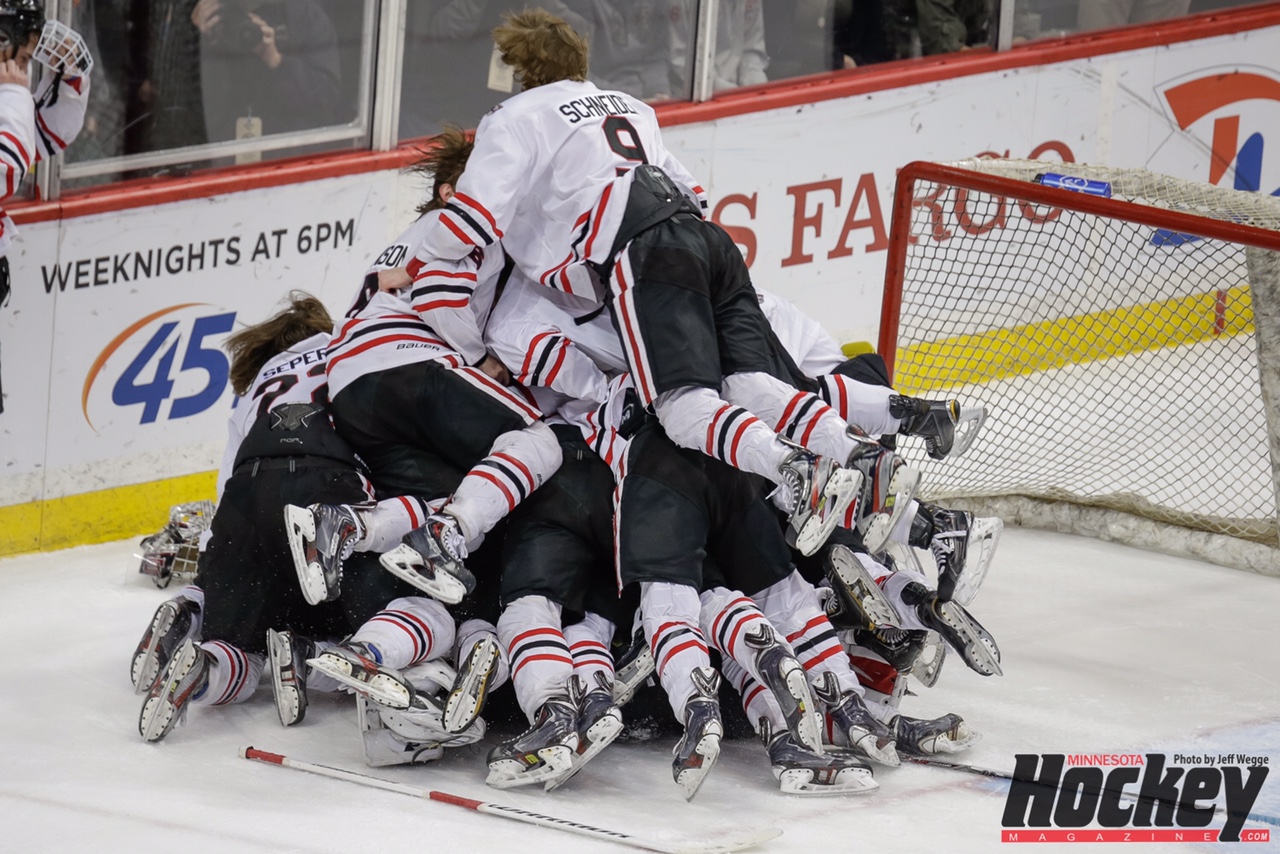 Panthers stay together and are perfect, veteran coach takes note

The Lakeville North Panthers opened the 2014-2015 season with seven NCAA Division I college athletes, six for hockey and one in baseball.

They closed it by collecting their gloves, sticks, and helmets that littered the Xcel Energy Center ice after capturing their first-ever state high school hockey championship as the remaining fans from a record state final session crowd of 19,495 filtered out of the building.

Labeled as a state title contender from the season’s opening faceoff, Lakeville North went bell-to-bell in posting a perfect 31-0-0 record, capping the season off with a 4-1 win over Duluth East in the Class 2A championship game.

It is a team Duluth East coach Mike Randolph, a strong proponent of high school hockey, issued a direct statement to in an acknowledgement of how impressive the Panthers were this year and how valuable the Minnesota High School Hockey experience is to a player and team.

It was a message levied to all that have been tugged on by outside forces to move to other leagues and teams.

After the final question had been asked in his post-game press conference, Randolph pulled the microphone back toward him saying, “I just want to make a comment about Lakeville North.”

He began his unsolicited comments by saying Lakeville North reminded him of the Eden Prairie team that beat the Greyhounds in 2011 and talked about his visit to the Eagles’ locker room after Kyle Rau scored the game winning goal against his team in the third overtime period.

Randolph was referring to his well-covered congratulatory moment when he applauded the likes of Rau and his teammates for sticking together and playing for each other and their community. Randolph’s team stuck together too and it was a gesture of respect from the long-time coach who has perspective on high school hockey and its impact on players, including the winning Panthers.

“Kyle Rau stayed in school, a bunch of them stayed in school, and this is a repeat example of kids staying in school, staying with their buddies and they will cherish that moment for the rest of their life,” Randolph said. “It’s a credit to those kids that they stuck together and the target was on them all year and they went undefeated and they are a true champion.”

He went on to say how much the Panthers gained as players and a team seeing their goal through, and in doing so are the first team to win 31 games without a loss or a tie.

“It’s an example that kids don’t have to leave early,” Randolph explained. “Those kids will have great college careers.”

He has a living example of that himself in his son Jake, who starred on his Duluth East teams, stayed in school with a number of players, played a season in the USHL for the Omaha Lancers while lighting up the scoreboard, and is currently third in scoring for the University of Nebraska-Omaha.

“They are great hockey players and did not lose a thing [by not leaving],” Randolph said of the Panthers. “In fact, they gained a ton by playing in this tournament in front of the big crowds. That’s a credit to them, sticking to their communities, sticking to their families, and they will always remember it so you don’t need to leave.”

The image of the Panthers standing arm-in-arm at the blue line during the awards ceremony was powerful image to what it means to be a team and sticking together to compete in high school hockey.