Stepping Up His Game 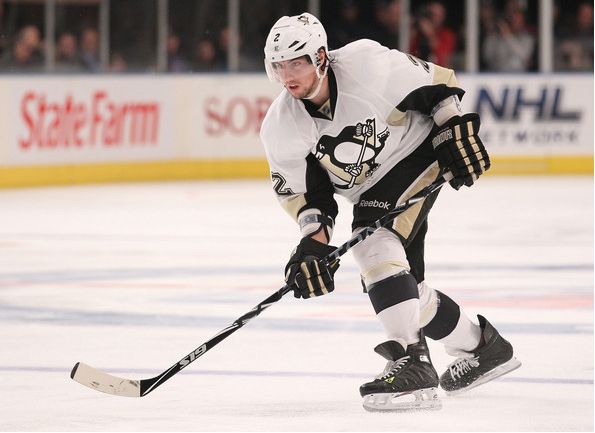 Much to the Penguins’ delight.

Playoffs aside, Niskanen is nearing the end of a career year which could not have come at a better time for an injury-riddled Penguins squad which recently became just the third NHL team to ever eclipse the 500-game mark in man-games lost to injury.

That the Pens have managed to reach the 50 win plateau for the third time in team history is a minor miracle considering the quantity and quality of players missing significant action this season. Niskanen’s role in Pittsburgh’s success cannot be overlooked and hasn’t been by his teammates.

“He’s been thrown into kind of a quarterback role on the power play for a chunk of the season and playing a lot more minutes against teams’ top players,” Penguins captain Sidney Crosby said. “He and a lot of our D have been thrown into different responsibilities and they’ve responded well. He just seems to get better with each season he’s played here.”

The slew of injuries and illness, particularly to Penguins’ defensive stalwarts Kris Letang, Brooks Orpik, Rob Scuderi and Paul Martin, thrust Niskanen into a bit of a role reversal as a leader on the Pens’ defensive corps.

In fact, Nisaknen played a stretch of games in December which left him as the lone veteran amid five rookies forming Pittsburgh’s top-six blueliners. Wild fans may recall the time frame coincided with Minnesota’s trip to Pittsburgh on December 19, an uninspired 5-2 loss to the Penguins a night after Niskanen logged a career-high 29:44 against the New York Rangers in Madison Square Garden.

“We’ve had the injury bug bad this year, more than any other team, so I was forced into kind of a leadership role,” Niskanen said of his increased responsibility. “I’ve always been the youngest defenseman on the team so it was a really good challenge. I think I kind of took it and ran with it.”

One of those rookies is 19-year-old Olli Maatta, who Niskanen has been paired with much of the season and has taken under his wing. He recalls how much he looked up to and appreciated what veteran mentors such as Sergei Zubov, Mattias Norstrom and current Minnesota Wild assistant coach Daryl Sydor did for him and is simply paying it forward.

“He’s been a huge factor for our team,” Pittsburgh coach Dan Bylsma said of Niskanen. “From a guy who was supposed to be traded away and not going to be on our roster, to a guy who’s been our top defenseman this year, without a question, not just offensively but defensively as well, it’s been huge.”

With Orpik, Martin, Letang and Scuderi locks as the Penguins’ top-four defensemen and a host of blue line prospects in waiting, Bortuzzo’s cap-friendly deal left the Virginia, Minn. native—with a cap hit of $2.3 million this season in the final year of a two-year contract—appearing as the odd man out and trade speculation ensued.

Niskanen, who led Virgina/Mt. Iron-Buhl to its first-ever trip to the Minnesota State Boys’ Hockey Tournament in 2005, was aware of the buzz surrounding his potential departure and admitted it became both a cause for concern and a source of incentive.

“Coming into the year I was probably penciled in as a third-pairing guy and a lot of people thought I was going to be on the move, so some things were up in the air,” Niskanen said. “I really like it here so I was worried a little bit and I think it did motivate me.

“I came into camp with kind of an attitude that I was going to prove that they needed to keep me because I really wanted to be here this season.”

Bylsma took note and, looking back, now scoffs at the idea that Niskanen was on his way out.

“Last summer I heard a lot of (long pause) pundits say he was going to be traded and not be back,” Bylsma said. “I don’t know if he bore a little bit of an edge because of that talk but he came in, had a great training camp and started off great with our season.”

I came into camp with kind of an attitude that I was going to prove that they needed to keep me because I really wanted to be here this season. – Matt Niskanen

That great start served as a catalyst to an outstanding season for Niskanen as the former Minnesota-Duluth star has posted career bests in goals (10) and points (43) and is a plus-32 while playing all 79 games to this point in the final year of a two-year $4.6 million contract.

While those numbers should earn Niskanen a significant raise this offseason, they’re a far cry from the 15 points and minus-15 he put up in 2009-10, his final full season with the Dallas Stars, the team which drafted him in the first round (No. 28 overall) in the 2005 NHL Draft.

After posting 61 points in his first two seasons with the Stars playing alongside Zubov, Norstrom and Sydor, Niskanen’s production dipped once his mentors departed as he wasn’t ready for the burden placed upon him.

Upon recording just six assists in 45 games played in 2010-11, Niskanen was shipped to Pittsburgh, along with forward James Neal, in exchange for former Gopher defenseman Alex Goligoski on Feb. 21, 2011. Niskanen says the trade was the best thing that could have happened to his career.

“At that time I needed change of scenery and a new set of eyes on me,” Niskanen said. “I wasn’t in the plans anymore there so it was nice to get a fresh start. I obviously hit the jackpot coming there. As it turns out I think it was a pretty good trade for us.”

His long-time teammate, and one-time trademate, has had a front-row seat to Niskanen’s maturation as a player.

“I think from the day he got traded, he’s been a changed guy and a changed player,” said Neal who scored 40 goals in his first season in Pittsburgh. “He’s showed how good he is and how good he can be. He’s been great for our team and given us a big boost.”

Niskanen agrees his overall game has come a long way in the past couple seasons and says there is plenty of credit to go around for that.

“The coaches have been really good, they’re really detail-oriented here, which I think has helped me a lot,” Niskanen said. “Part of it, too, is just the culture here. You have some elite talent that works really, really hard and they’re always looking to get better.