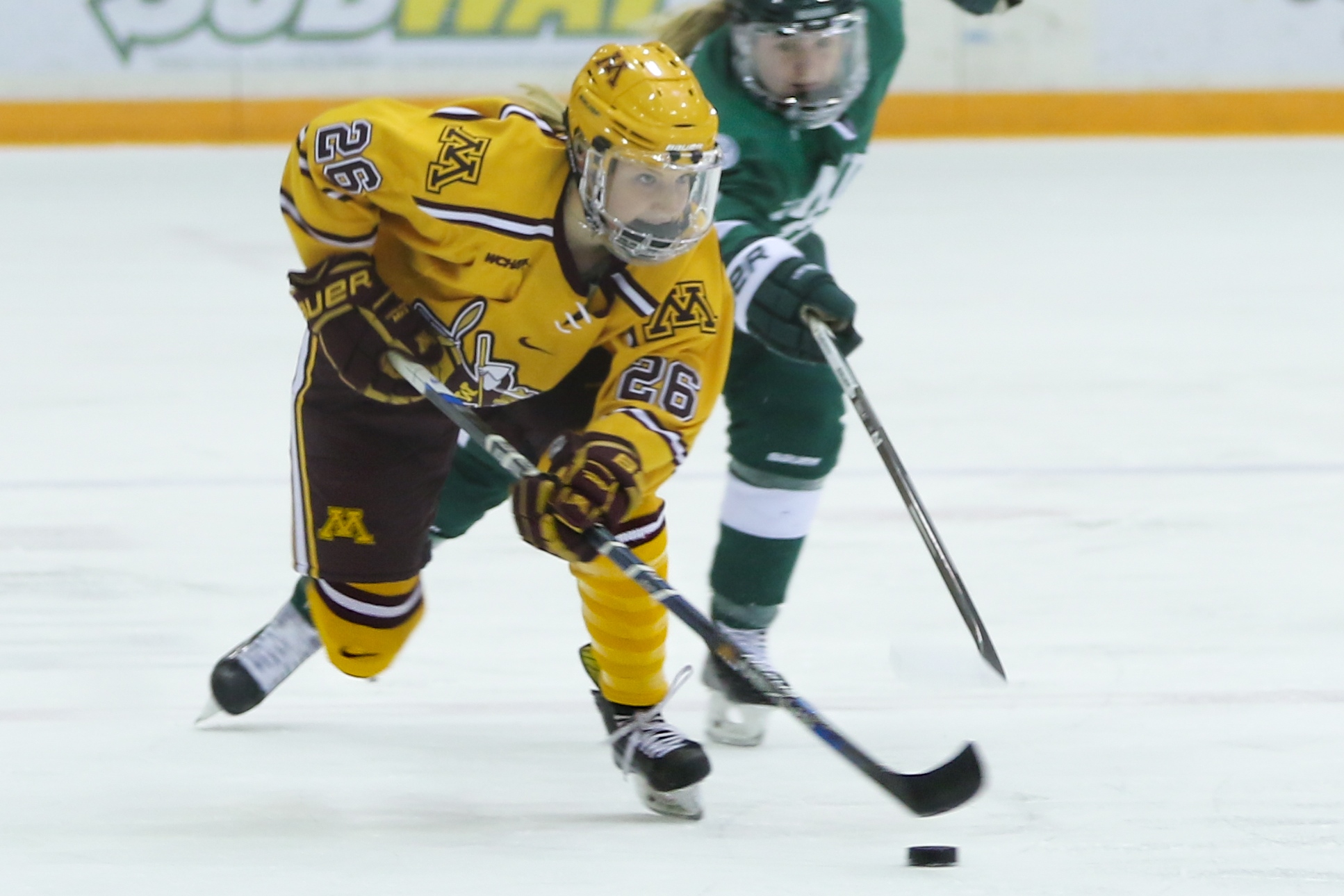 It’s difficult to imagine how a player gets more in the spotlight than the Gophers’ Sarah Potomak was last year when she scored the overtime goal that sent Minnesota to the national championship. But that’s the case for Potomak, who scored three goals and five points as a rookie in the NCAA Tournament.

The sophomore is now taking center stage in the absence of two of the biggest stars to ever wear maroon and gold, Hannah Brandt and Amanda Kessel. It’s been talked about ad nauseam, but that’s a testament to the impact those two had on the program.

The shoes that need filling are large and it will take a team effort, from top-line upperclassmen Dani Cameranesi and Kelly Pannek to freshmen Lindsay Agnew and Alex Woken. Yet, just one year into her collegiate career, Potomak has the potential to be the difference-maker Minnesota needs.

In some ways, the season started relatively quiet start for Potomak, who put up just one goal and four points in her first four games

Last season, her 1.42 points per game ranked eighth in the nation and her 54 points were the eighth most ever by a Gopher rookie. The team needs Potomak to build on that performance as lines start to coalesce and the team looks to quell some slow starts.

That extra offense is especially important in a conference rife with outstanding goaltending. Ann-Renee Desbiens and Brittni Mowat are two of the best in the nation. Young netminders like Ohio State’s Kassidy Sauve, Duluth’s Maddie Rooney, St. Cloud’s Janine Alder, and North Dakota’s Lexie Shaw are all off to strong starts. Meanwhile, though the season is young, the Gophers are averaging just 3.2 goals per game in conference play. That’s a good step down from last season’s 5.14.

Since Minnesota’s Oct. 14-15 series against Minnesota-Duluth, Potomak has seen an offensive explosion. She leads the nation with 18 points in 10 games, scoring a game-winning goal in half of those contests. 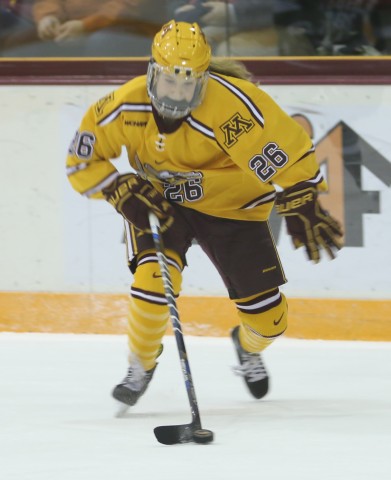 Coach Brad Frost started the season with Potomak at center. It was an experiment. If she could work there, it had the potential to give the Gophers depth that would be difficult for opponents to handle. While Potomak has played center previously for the Canadian national team, it was the first time she’d been given that responsibility with the Gophers.

But in an effort to ignite some offense against Duluth, Frost moved her to wing on the top line with Cameranesi and Pannek, a trio that spent a bit of time together last season when Brandt was injured.  It was the start of Potomak being able to focus on offense and it’s paying dividends for the team.

“I just really felt like we needed to get some scoring, from [Potomak] in particular,” Frost said of reuniting that line. “The first few games we were more of a balanced lineup. We tried to get our top players together here with Pannek, Potomak, and Cameranesi. It seemed to pay off.”

It made the roster top heavy, but it certainly had the desired effect. In her first weekend after the line change, Potomak garnered WCHA Player of the Week honors.

“It felt good. I thought that me and Kelly and Dani blended really well together,” Potomak said after an Oct. 28 win over St. Cloud State. “Center is more of a defensive responsibility. So, when I’m playing wing, I find that I’m more open to producing offense, especially with Kelly as a center. She’s so good there. It makes it easy.”

Lines continue to be tinkered with, but like recent seasons, if you have a top-line powerhouse, things start to sort themselves out.

“You know, in the past, you’ve had Hannah Brandt and Amanda Kessel, so it’s been pretty easy to figure out,” Frost said after an opening weekend tilt against Lindenwood. “Let’s put anybody with them and we’ll go from there. Well, we don’t have Hannah and we don’t have [Kessel], and quite frankly we have a multitude of forwards who are very talented, so a lot of people are getting some different opportunities.”

Potomak has risen to the challenge of her sophomore year in the early going, again proving herself to be an adept skater at both ends of the rink and capable of providing clutch goals. “I don’t feel any additional pressure [this season],” she says. “I just think that there’s an expectation that I show up every day. I’m not a freshman anymore and I know what to expect. I’m just going to do my best to lead the freshmen and contribute everything I can.”