Jackson Cates’ OT winner has Ponies playing for a trip to state. 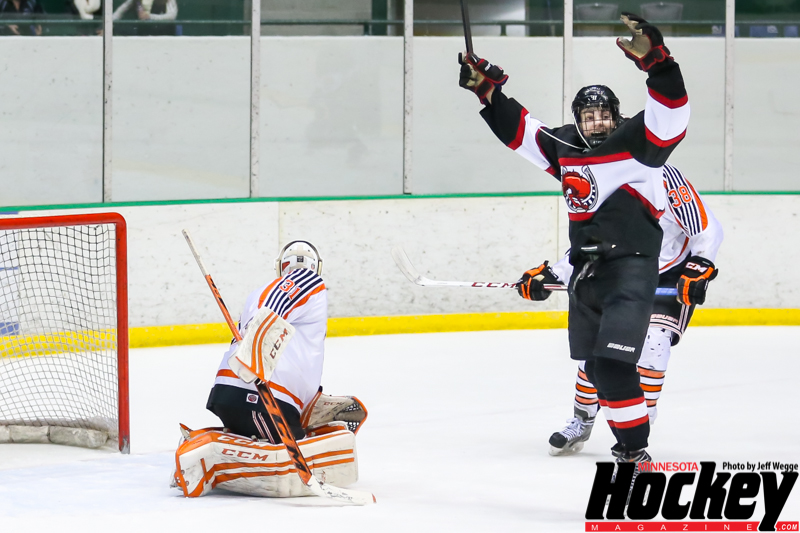 Stillwater’s Jackson Cates raises his arms in triumph after scoring in overtime to beat White Bear Lake and send the Ponies to the Section 4AA final. (MHM Photo / Jeff Wegge)

With Hill-Murray’s 5-1 win over Roseville earlier in the evening, the stage was set for the Pioneers to face bitter rival White Bear Lake in the Section 4AA finals on Friday night.  The game would mark the final edition of the nearly annual clash between the two east-metro powers at the State Fairgrounds Coliseum before its ice rink melts for last time.

But Stillwater sophomore Jackson Cates drew the curtain down on that encore performance when he deflected the puck past Bears’ goalie Chase Gorman 3:10 into overtime to lift the third-seeded Ponies over No. 2 White Bear Lake 2-1 in Tuesday’s second semifinal matchup. The Ponies and the Pioneers meet at 8:30 om on Friday for the section title.

Sam Sagissor fed Pony defenseman Jon Peterson at the left point and he threw it toward the Bears’ net where Cates got a stick on it for what he called “the biggest goal of my life.”

“I saw the puck go out to Petey and I was just standing in front of the net alone, he shot it, I tipped it and I just felt it going in,” Cates said.

“I’d say that’s OT, but that’s how we play just kind of in general,” Stillwater coach Matt Doman said of the manner in which the winner was scored. “We want pucks there, we want bodies there and I think at most levels if you can do that you can have success.”

Stillwater’s persistent defensive pressure stymied the Bears’ potent offense, holding White Bear Lake to just 13 shots on goal in the process. The pressure extended into the Ponies’ offensive zone where a fierce Stillwater forecheck created turnovers and offensive opportunities, forcing Gorman to make 31 saves and give his team a chance to reach the extra session.

That the Ponies were able to hold the Bears to so few shots came as no surprise to Sagissor or his coach.

“We’re a good defensive team, we can block shots and we knew that’s how we’d have to play if we were going to beat them,” Sagissor said.

The game was scoreless after two periods but that quickly changed in the third period when Devin Cates fed Jack Manning at the doorstep for just his fifth goal of the season but second of the postseason. The goal served to inspire the Ponies who outshot the Bears 11-1 in period’s first eight minutes.

But Sagissor’s interference penalty at 11:38 gave White Bear Lake’s power play, 0-for-3 to that point, another chance and the Bears capitalized. Junior Brady Anderson notched his 12th of the season 1:10 into the power play to tie it giving the Bears hope for a comeback.

But Doman said the goal was in no way an indication Stillwater’s grip on the game was beginning to slip.

“I thought we were in control of the game so I didn’t want to change much about how we were playing or things we were doing to have success,” Doman said. “We just had to try to stick to our guns.”

“We want to make plays but, ultimately, we want pucks to the net and we want traffic in front,” Doman said. “If we can make a good play, yeah we want to make a play, but if we keep it simple and we’re hard to play against we’re tough to beat.”