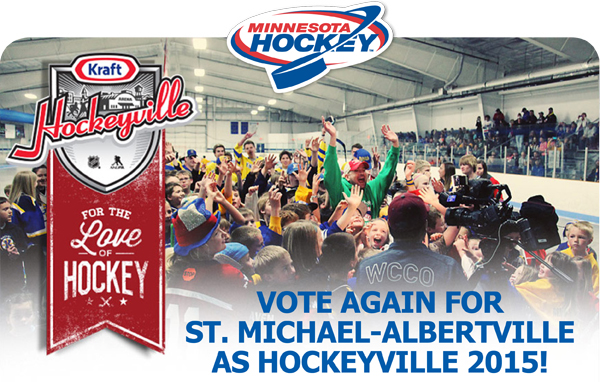 America’s Most Passionate Hockey Community Will Receive $150,000 for Arena Improvements

St. Michael-Albertville (STMA) has advanced out of the Top 10 in the Kraft Hockeyville competition to find America’s most passionate hockey community. STMA is now among the final four communities remaining, and is up against Decatur, Illinois as the two look to make it to the finals of the competition. The second round of voting opens at 11:00 PM tonight, April 20 and closes at 10:59 PM on Wednesday, April 22 at 10:59.

Players in the STMA Youth Hockey Association (STMAYHA) play at STMA Arena in Albertville. With more than 500 players, STMAYHA is one of Minnesota’s largest associations with only one local rink at its disposal. In advancing to the top four in the contest, STMA now qualifies for $40,000 in arena upgrades. The winning community of the Kraft Hockeyville contest will have the honor of hosting a 2015-2016 NHL Preseason game in their community, a live broadcast from NBCSN and $150,000 toward upgrading their local rink, courtesy of Kraft.

“This contest has been such an amazing experience for the STMA community, and we are so thrilled that they have advanced to the semifinals,” said Minnesota Hockey President, Dave Margenau. “The Minnesota Hockey communities have a way of coming together and I believe this truly has become an effort that everybody in the State of Hockey is getting behind. So keep voting and let’s get STMA to the final round!”

STMA was one of 1,400 communities that were originally nominated, and was named one of 10 finalists for the distinction last week. The 10 finalists were selected on criteria that reflects the community’s passion for hockey, community spirit and creativity/originality. STMA’s video submission can be found here.

“This has been an amazing run for our community, and we hope we can keep it going,” said Josh Opiola, president of STMAYHA. “This past week has brought the St. Michael and Albertville communities even closer together and you can feel the buzz all around town. We want to thank everyone that has gotten behind this effort and ask that they keep it going so we can get this much-needed reward!”

There are multiple ways to vote. Voters can visit the website www.krafthockeyville.com and follow the links and instructions to vote; call 1-855-255-5975 and follow the instructions to vote; or use a two-way text-messaging capable device and text the word “Albertville” to 35350 to vote. Each eligible voter may vote fifty (50) times per method per day during each Voting Phase.

Supporters of STMA hockey have also set up a website with information about the contest at www.VoteSTMA.com, and a Facebook Event site with voting reminders and instructions.