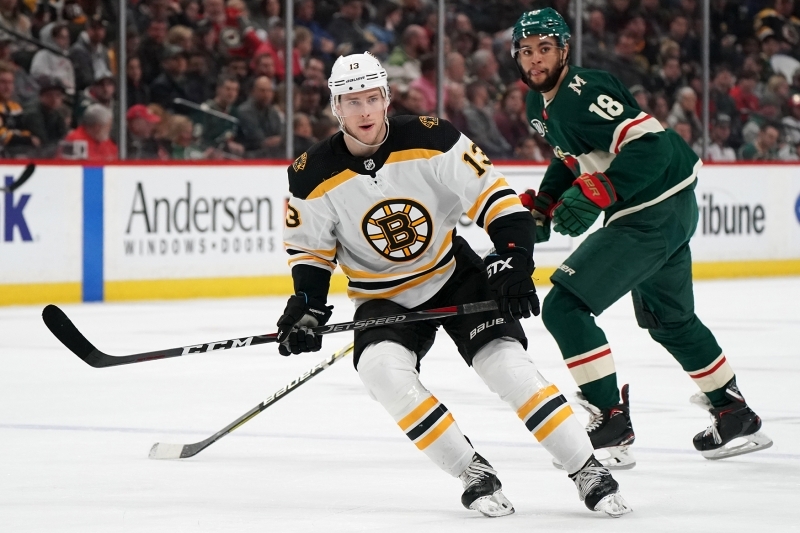 Minnesota’s Jordan Greenway keeps tabs on good friend, and former teammate, Charlie Coyle of the Boston Bruins during what became a 3-0 loss to Boston in the Wild’s final home game of the 2018-19 season on Thursday night at Xcel Energy Center. (MHM Photo / Rick Olson)

St. Paul — When it comes to Boston slang, “wicked” is a word that might come to mind. But there’s a different “W” word that former Minnesota Wild and current Boston Bruins forward Charlie Coyle kept repeating the past couple of days: Weird.

“It’s just a weird thing,” Coyle said of his first game back at Xcel Energy Center since being traded in February. “The trade happened so fast, and you don’t get to say ‘bye’ to everyone. I had to just get up and go.

“So just to see everyone and catch up a little bit, it’s obviously a weird thing… playing against your old friends, teammates.” 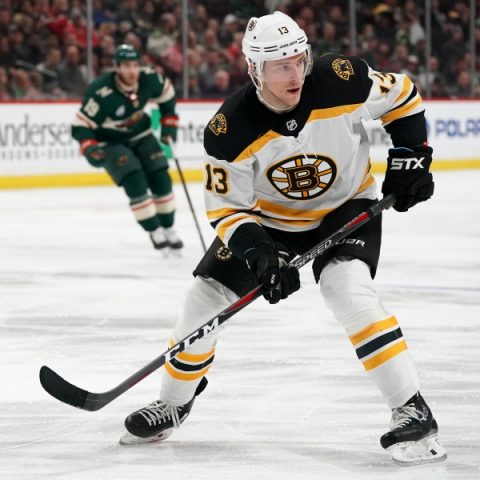 Coyle made his first return to Minnesota to face the Wild as an opponent Thursday night. With a playoff spot already locked up for the Bruins (49-23-9) sitting with 107 points in second place in the Atlantic Division, they came in and shut out the Wild (37-35-9) by a 3-0 margin. It was the seventh shutout of the season on home ice for the Wild.

Though Coyle didn’t factor in to any of the scoring, he registered two shots on goal in the game and got the video-tribute treatment along with a warm ovation from Wild fans during the first period.

Coyle was traded to Boston on Feb. 20 for youngster Ryan Donato. Both are Massachusetts natives and have worked out together during summers, said Coyle, who added that Donato is “a great kid” with a lot of skill.

Simply looking at the small sample size of points during the rest of the 2018-19 season, the Wild came out ahead on the trade. Donato came into Minnesota firing on all cylinders with points in his first five games in a Wild sweater, including an overtime winner for a 2-1 victory over St. Louis in his Xcel Energy Center debut Feb. 24. Donato has 4 goals and 16 points with the Wild in 21 games (10-15—25 for the season).

Contrast that to Coyle’s slower start in Boston, skating pointless in his first seven games with the Bruins. However, he scored a nifty shootout goal in his Bruins debut, a 2-1 shootout loss to St. Louis. He has just 2 goals and 4 assists in 20 games with his new team (12-22—34 for the season). For the most part, he’s starting to find his groove with the playoff-bound Bruins, Coyle said.

“It’s a hard thing to play consistent every single night and do the same thing,” Coyle said. “Points will come. I don’t think you focus on points too much as long as the team’s winning.

“He’s a guy that you always wanted a little bit more from him,” Boudreau said. “You always thought there was more in him.”

Hockey minds know there’s a business aspect to running teams and making trades. No doubt there are all kinds of factors. It’s abundantly clear how much his teammates and Boudreau wanted to keep him around Minnesota.

“Charlie’s one of the best kids you’ll ever meet in your life,” Boudreau said. “He was perfect as far as personality.

“A solid person and a great player to have on your team.”

Coyle appreciated the kind words but was also quick to throw credit toward the Wild organization.

“You’re in such a good environment,” Coyle said. “They kind of set the standard right away. I just follow suit.”

Coyle skated with a variety of teammates in Minnesota this season, including Zach Parise, Eric Staal, pal Jason Zucker and Jordan Greenway, another close friend. 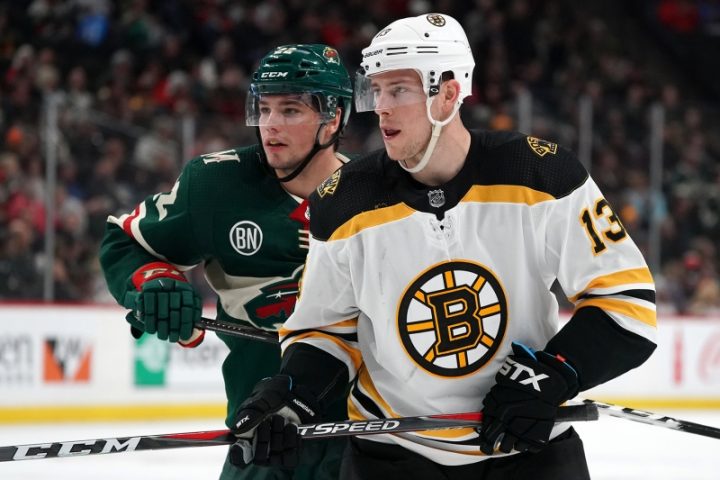 “We had a pretty good relationship, so being able to play against him will be fun,” Greenway said after Thursday’s morning skate.

The two still talk and help each other with their games, Greenway said, adding that it was special being able to go out for dinner and hang out with his former teammate. Greenaway also declared he wasn’t “going to take it easy on him” once the game started.

“I’m going to give it to him,” Greenway said. “I told him that last night.

“He’s scared. He backed down a little bit.”

He was part of the string of six straight playoff appearances for the Wild, with 15 points in 44 postseason games for the Wild. Now he finds himself in the playoffs for a seventh consecutive season, even though his old friends are out.

“It’s a weird thing,” Coyle said. “You start your year with them, and you always plan on finishing the year, you don’t plan on getting traded. You want to make sure you do what you can to help your team and get to the playoffs, and all of a sudden, you get taken from that.

“You always hope the best for (the Wild). I want them to succeed.”