The Streak is Dead 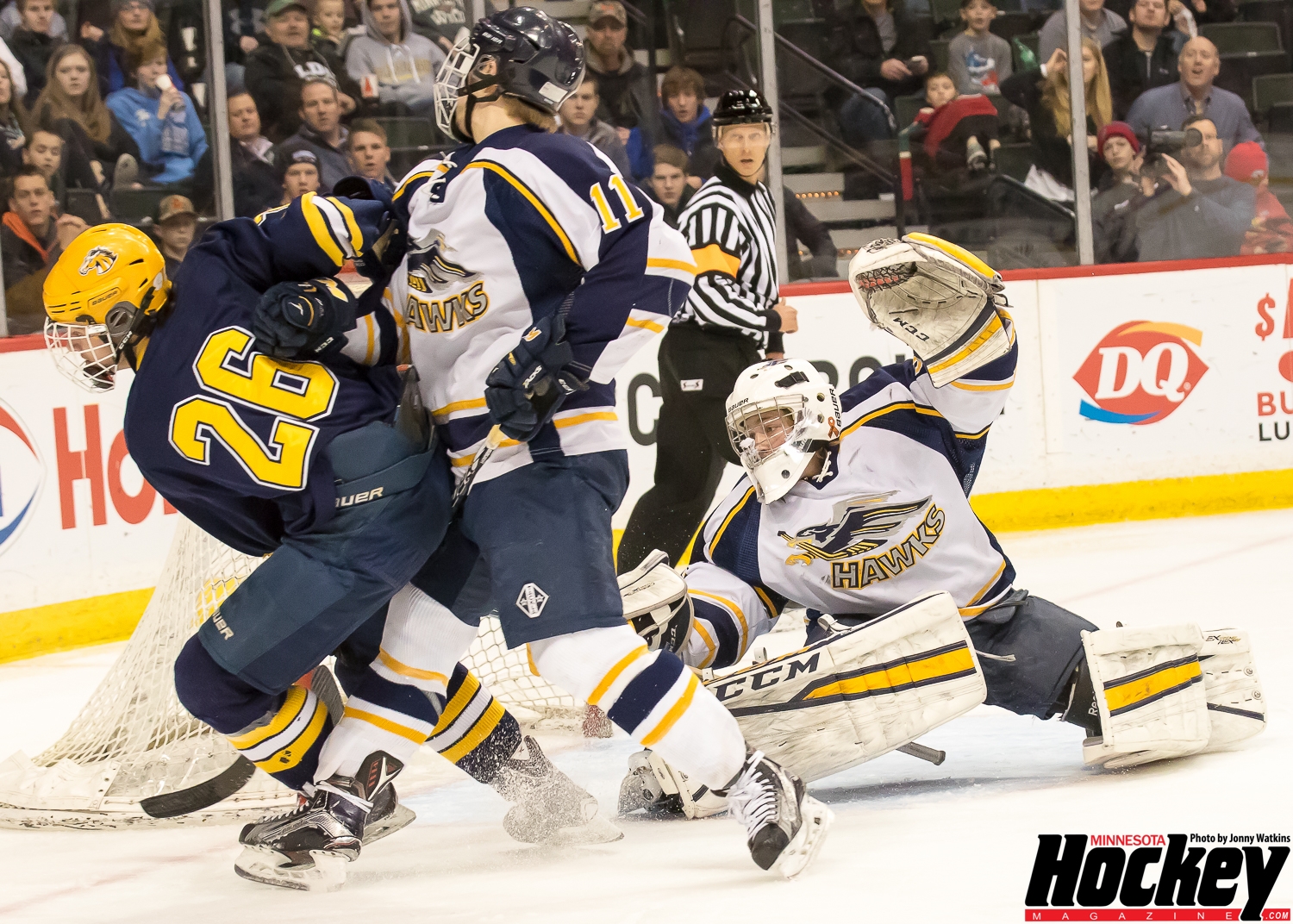 Hermantown goaltender Luke Olson blanked the Breck Mustangs 5-0 on 23 saves to backstop the Hawks to its first Class 1A state championship since 2007 on Saturday afternoon at Xcel Energy Center. (MHM Photo / Jonny Watkins)

St. Paul — Somewhere on the streets of St. Paul is a homeless monkey who once called Hermantown coach Bruce Plante’s back home.

Plante’s Hawks put an end to a six-season stretch of Class 1A state tournament runner-up finishes on Saturday afternoon in a resounding manner with a 5-0 win over the Breck Mustangs at Xcel Energy Center.

The sound of the final horn brought with it a mixture of excitement and relief for Plante, who hasn’t been able to escape the constant questions about when his team would finally skate away with a title. He jokingly admitted he was afraid of what would have happened to him if Hermantown had lost yet another state final.

“They’d have probably taken me out of here in a straight jacket or something because I just didn’t know if I could handle another loss in this game,”Plante said. “It would’ve pushed me over the edge.”

Hermantown’s Cole Koepke and Ryan Sandelin each had a goal and two assists and goaltender Luke Olson stood tall on the season’s biggest stage, shutting out the high-octane Mustangs with 23 saves.

It was only appropriate that Hermantown’s streak of disappointment would end where it began, facing the Breck Mustangs in the Class 1A championship game. The Mustangs beat the Hawks 2-1 in 2010 to win their second consecutive state title.

What wasn’t known at the time was it would be the first of four heartbreaking one-goal losses for Hermantown during the streak, including matching 5-4 overtime defeats at the hands of St. Thomas Academy in 2011 and East Grand Forks in 2015.

So the pressure has been mounting on the Hawks with each trip to St. Paul but Hermantown senior captain Wyatt Aamodt said the players tried their best not to worry about it too much.

“We obviously felt it,” Aamodt said. “But we figured if we could jump on them early and pop a couple in and just keep rolling, we’d be fine.”

He was right and he personally saw to it as the first period approached the 10-minute mark.

Aamodt made a great play at the left point to hold the zone and get the puck to Sandelin who fed Koepke in the slot. His quick shot deflected off a Breck defender’s stick over Mustangs goaltender Linden Olness’ shoulder.

Less than three minutes later Hermantown took a 2-0 lead when Koepke and Sandelin combined on a gritty forecheck effort leading to Sandelin feeding Jesse Jacques who buried a shot from the left circle at 12:40 of the first.

Plante said this team was motivated by the streak rather than in fear of it and the players showed no sign of nerves prior to the game.

Breck turned up the pressure on Hermantown late in the first period with near misses by Dalton Weigel and Mitchell Machlitt in the final two minutes, but the Hawks weren’t done yet.

Hermantown’s Brendan Baker chased down a dumped puck below the goal line and fed James Lindberg who snapped a shot from the bottom of the left circle just inside the far post.

“It was a great play by Baker to get it back to me,” Lindberg said. “I just saw a little hole up top and I figured you might as well go for it, it’s the state championship game.”

If there’s such a thing as a back-breaking goal in the first period, that was it.

“3-0 is a lot better than 2-0, you know how they say a two-goal lead is the worst thing in hockey,” Lindberg said. “And to get that three nothing lead that was a big pick-me-up after that.”

Logan Judnick added a second period goal and Sandelin notched a shorthanded tally in the third to provide the final margin.

Olson was outstanding, especially in the second period when he made nine saves including successive right pad stops on Weigel and Will Torgerson near the six minute mark. He also benefited from Tyler Scott’s shot clanging off the left post with just under seven to go in the middle stanza.

“Luke’s never let us down one time this year,” Aamodt said. “Every big game, you know, he’s stood on his head for us.”

Plante said Olson has not had a bad game in two years in the Hermatown crease.

“He’s just calm and he’s cool and when he gives up a bad goal he gets better,” he said.

For Plante, the win is one of the greatest moments in his hockey life.

“The first time we went to state was awesome and when we won the state in ’07 it was great because it was the first time our program had ever done that,” Plante said. “But with all these six times in a row, and all the mounting stuff that goes on with that and a lot of things that get said and what not, I just wanted it over with really. These Kids took the bull by the horns and grabbed it and went with it.”