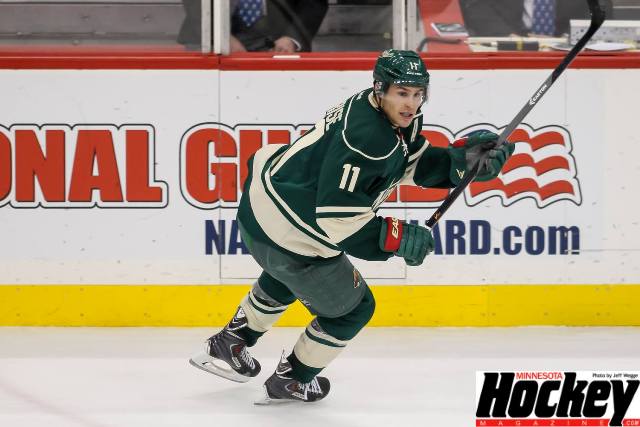 SAINT PAUL – Facing Winnipeg at home Sunday afternoon, Minnesota played its third game in four days and, with how the Central Division showdown turned out, at times Sunday felt like three different games.

Fortunately for the Wild, the finish saw the home team extend its winning ways for another day.

Marco Scandella returned from a bout with the mumps to score a dream-like first career overtime goal 1:01 into the extra period and Minnesota defeated the Jets 4-3 to earn its third straight win. Winnipeg nearly played spoiler against the Wild, which coughed up a three-goal lead over a five minute stretch in front of 18,808 fans at Xcel Energy Center.

A fast start gave way to several shorthanded stretches, which in turn became a frenzy to save face and two points from a third-period free fall against the Jets. Some stretches were full of fast skating and highlight-reel goals. Others had hatred stamped on them. Both teams went through a range of emotions fitting for geographic rivals.

“You have to win games different ways and today we found a way to win. That’s what matters,” said Minnesota coach Mike Yeo Sunday following his team’s victory.

The Wild went 8-for-8 on the penalty kill against Winnipeg in a game that featured 48 minutes of penalties. While special teams made a major difference to an already tired team that had to kill three separate two man advantages, so did a pair of fresh faces that hadn’t been in action recently.

Both Scandella and Zach Parise were highlighted by Yeo pregame. Both made an impact in their return to the lineup. Parise, missing the previous five games with concussion-like symptoms, admitted he was adjusting back to game speed. The Wild forward stated his case for being missed early with a pair of first period goals despite all that.

Neither went off his stick.

Following Nino Nieddereiter’s nifty stickwork on the power play to score his eighth goal 2:07 into the first period, the Wild forward added to his scoring lead with a goal that went off Winnipeg forward Blake Wheeler and past Ondrej Pavelec. A large visiting contingent of blue and white jerseys making the way south to the “State of Hockey” capitol, which was previously noisy pregame, spent the following 40 minutes silent.

Parise notched a second after crashing the net and having Jared Spurgeon’s shot go off his body into the net.

“They’re both good skill plays,” Yeo said. “What I like about Zach is when you see the end result there are things leading up to that are the reason he scores those goals as well. He doesn’t take shortcuts.

“We talked about doing something before the game, draw it up on the board and then you see that first goal go in because he does exactly what we’re talking about. That’s leadership.”

Jets coach Paul Maurice pulled Pavelec, who made 8 saves on 11 shots, after the first period facing a 3-0 deficit for Michael Hutchinson. He was able to stem the tide for Winnipeg.

Penalties did the rest with 14 separate infractions called in the second period. Ryan Suter was called four times for penalties Sunday – two more times than he had all season – and the flow of play which the Wild had slowed to a trickle. Tempers were short for both teams. At the same time Minnesota spent much of the middle frame killing penalties and being at a disadvantage, which eventually caught up to the team.

“Not a lot of games you see teams kill off three 5 on 3 penalties. It doesn’t happen. The PKers did a really good job,” Parise said. “They blocked shots, they cleared the puck when we had a chance to and that’s the biggest thing. We pressured at the right times.”

The Jets were only able to muster three shots on goal in the first period, but matched that total and more with three goals in a 4:52 span; resuscitating life in the building for fans of both teams.

Michael Frolik started the barrage that sent Minnesota goaltender Niklas Backstrom from shutout to the showers 5:55 into the third period. Evander Kane cut the lead to 1 from behind with his second goal of the season while Andrew Ladd tied the game at 3 with 9:13 remaining in regulation.

“We’re a resilient group here. We worked hard and we didn’t break. That’s the most important thing,” Scandella said. “We still had confidence on the bench playing our game even though they were coming after us and making a push.”

Darcy Kuemper replaced Backstrom, who made 19 saves, for the remainder of the game. Yeo stated the move was for momentum since Minnesota had already used his timeout. “You’re looking for anything to do,” he said.

Kuemper made three saves in relief. The post was also his friend with Winnipeg twice being unable to get a bounce for the go-ahead goal. Minnesota had several chances as well – Parise came close to a hat trick while Thomas Vanek was unable to get his stick around a last minute rebound – before Scandella, set up by Jason Pominville, lit the lamp in the extra frame with his third goal.

Suddenly the defenseman who had no energy for several days thanks to mumps gave the “State of Hockey” plenty Sunday. Giving up a point or not, the win set a different tone for the Wild, and with it Marco Scandella.

“You kind of have dreams to get one like that. Especially in overtime,” he said.

-The Wild held a moment of silence for 14 year-old Patrick Schoonover before the game. Schoonover collapsed on the ice and passed away Friday in Brainerd playing for the Eastview Bantam AA team.

-Jason Zucker left the game 8 minutes into the first period hurt following several shots on the ice by Winnipeg’s Mark Stuart. He returned minutes later, fittingly to kill a penalty.

-Minnesota is second in the NHL with an 89.3% penalty kill

-Darcy Kuemper played in his 15th game this season, meaning he now requires waivers to be sent down to Iowa.